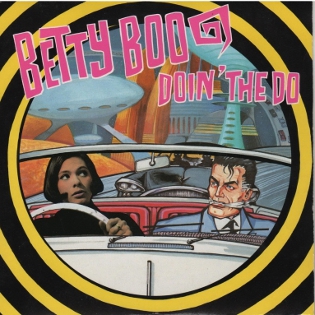 Song of the day: Betty Boo – Doin’ The Do

It was 1990 and Betty Boo‘s brand of rap, pop and R&B was infused with 1960s superhero kitsch. Along with Deee-Lite‘s melange of house beats and psychedelic grooviness, she arguably set the tone for a decade that took the previous decades’ excesses beyond “cheese” and back into the mainstream. ‘Doin’ the Do‘ used colourful comic book imagery to build Betty Boo as an icon and ‘Where are You Baby‘, the following hit single from her debut solo album Boomania, was similarly nostalgic and this time played on the space-age theme that had been popular in the 1960s and ’70s.

This left a lasting impression. Indeed, the story goes that the Spice Girls recruitment ad’s request for “larger than life cartoon characters” said “We’re looking for five Betty Boos”. Obviously, their resulting “Girl Power!” brand of empowerment has divided feminist opinion and been criticised widely so it’s perhaps easy to dismiss Betty Boo’s work as a matter of style over substance: cheeky and loud, rather than meek and demure, but somehow not the work of a credible artist.

Such a conclusion would be wrong in my view. With roots firmly in rap rather than pop, Betty Boo (or Alison Clarkson, her widely known real name) was an original member of The She Rockers, who allegedly got their first big break after performing a spontaneous rap in front of Public Enemy in a fast food restaurant. Trained in sound engineering, Clarkson used the money from her single with the Beatmasters to buy equipment. This led to her being invoved in the production for Boomania as well as writing the tracks for it in her bedroom in just a few weeks. Talking to The Independent in 1992, she said it sometimes irked her how little credit she got for that side of things but added that she tackled her frustration with the thought that “The people who buy my records like the sound of my voice and the tune; they’re not interested in credits.”

After a break away from the music business, Clarkson found commercial success again as a songwriter when one of her compositions ‘Pure and Simple’ was recorded by Hear’Say and became one of the fastest selling singles in UK history. When writing and working behind the scenes in the emerging Popstars/Pop Idol/X-Factor age, she found the industry approach very different from the one she had been used to back in the early 1990s:

“As a pop artist, I had my own image. I had got to help the directors with the videos, I worked very closely with an art designer on the sleeves and stuff. It’s completely different now.”

Part of the appeal of ‘Doin’ the Do’ lies in Boo’s bragging confidence in the video and lyrics. This itself arguably makes her a good feminist superhero figure. However, it also brings up a more problematic aspect to the persona, with Boo’s rap battling stance arguably glorifying the position of the bully (“You say I bully though I know I’m no goody goody”) and employing sizeism (“fat as a rolypoly”) to insult a rival.

Certainly, the Betty Boo character is not the stuff of revolutions but Clarkson’s profile as a performer, producer and writer firmly files her work under “feminist interest” as far as this feminist is concerned.

YouTube video summary: Betty Boo dressed as a schoolgirl. She fantasises in the classroom about receiving the adulation of her peers as she dances and raps. This daydreaming, along with her stashing of comics in her desk, attracts the negative attention of her teacher. Betty goes on to rap in various classroom settings and mixes up potions in the science lab to give her school friends animal faces. She later challenges the authority of two of her teachers when she bursts into the Head’s office to dance around and rap at them. Betty also creates a miniature version of herself and the video ends with this being merged with her schoolgirl and black-leather-wearing selves to go inside a ‘Doin’ the Do’ comic book.

Click here for a full description: Betty Boo – Doin the Do video details.docx