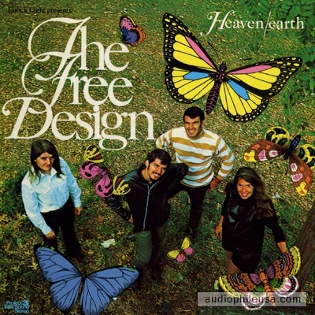 Song of the day: The Free Design – Girls Alone

It took over 20 years after The Free Design‘s demise in 1972 for this family act‘s clean-cut but off-the-wall brand of baroque pop to achieve the recognition it deserved. Cult success came during the easy listening revival of the mid 1990s, after Cornelius reissued their back catalogue on Trattoria. Later, in 1999, Stereolab named the title track of an EP after them and several acts making music in the nineties and beyond, including Belle and Sebastian and The High Llamas, have been influenced by the group.

Many of The Free Design’s songs, such as ‘Kites are Fun’, have a cheerful wholesome vibe. Others, such as the polytastic ‘You Be You and I’ll Be Me’ continue this earnest mood but add a progressive flavour in keeping with the hopes and dreams of a generation keen to be liberated from the social and sexual constrictions of the previous one. There is also cynicism throughout their work. This is notable in ‘2002: a Hit Song’ (a piece about their obscurity at the time that wasn’t actually that far off in terms of a prediction of when they would achieve greater success). Such insightfulness continues in the spectacularly spooky and cryptic ‘Girls Alone‘ (sung by the women members, Sandy and Ellen, alone). This was taken from the group’s third album, Heaven/earth (1969). According to the liner notes for the album, written by member Ellen Dedrick:

“This is another original by Chris [Dedrick]. …there is an ambiguity about the title because the song also is telling of the fears and thoughts of girls when they are alone…“

It could possibly be argued that the fact this song was written by a man makes it somewhat less likely to have been a searing indictment of the culture of fear that young girls are nurtured into under patriarchy. After all, the writer would not have been speaking from direct experience. However, it’s hard not to find feminist buttons pushed when hearing lines like this:

“I’m afraid of the man in the window

If I tried I could end it before he comes

It’s a branch but it looks like my tomb

Girls all alone are afraid of the dark

Girls all alone are afraid of the light

I’m afraid of the dreams in my death bed

I’m afraid to go ‘way from the sun

If I tried I could live so much longer

But I’m dying while living and fearing til dying is done.”

And just what is it that the song’s protagonist says she can “guess what we’re running to”? Where’s the bluff? Is it just about young girls scaring themselves during a game or something more culturally profound? It’s entirely feasible that any feminist conclusions are mere speculation but this eerie and mysterious song -with its atmospheric split between pastoral quaintness and ghostly foreboding- certainly leaves plenty to capture the imagination.

Video description: YouTube clip begins with the name of the band and song in white on a black background and is followed by a static shot of the album cover for Heaven/earth (see image info embedded in the picture included at the beginning of this post). This changes at 1.23 to a black and white picture of the band performing in a plain studio. All are standing, aside from a musician on a stool in the middle. (Writers note: I don’t know who this is!) There is then a switch at 2.41 to a black and white publicity shot of Chris, Sandy, Ellen and Bruce in a garden.