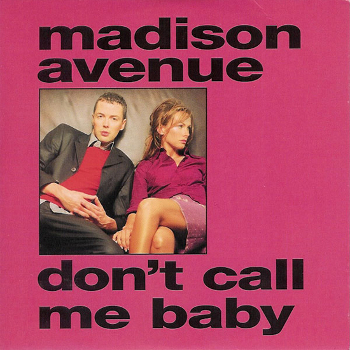 Song of the day: Madison Avenue – Don’t Call Me Baby

“You and me, we have an opportunity

And we could make it something really cool

But you, you think I’m not that kind of girl

I’m here to tell you baby, I know how to rock your world

Don’t think that I’m not strong

I’m the one to take you on

I’ll make you sorry you were born…“

Not being a straight-up rejection song does, of course, open the lyrics up to more pessimistic feminist readings (e.g. framing the “attitude” as a style-over-substance act designed to appeal to the guy). However, I’d personally prefer to take the sexual interest and boasts that “I know how to rock your world” in the first verse as seriously as a man’s typically would be (perhaps “seriously” is the wrong word, seeing as she’s being a bit of a blowhard herself). These combine with the takedown (“Don’t underestimate me boy”) and declaration of independence in the chorus (“I belong to me”) to create a snapshot of a woman attempting a hook-up in a club on her own terms.

Of course, there’s also the question of how much a woman’s involvement in music takes place on her own terms and how she might be perceived or written about if she achieves any level of prominence alongside the men she works with. In Madison Avenue’s case, it seems Andy Van Dorsselaer‘s background as a DJ and producer and Cheyne Coates‘ as a dancer and choreographer has made it easy for some sources to claim she somehow “forced her way into the picture”. (A positive spin on this is certainly possible but not without the decidedly sour implication that Madison Avenue was strictly Andy’s project, with Cheyne as an added extra.) However, Cheyne is also a singer-songwriter, producer and singer-lyricist and the group mainly worked together as writers and producers in their early days. (Their first single ‘Fly‘ featured the vocals of singer Kellie Wolfgram before Cheyne’s guide track version of ‘Don’t Call me Baby‘ resulted in her becoming the vocalist for the final one.)

After the release of Madison Avenue’s album, The Polyester Embassy, Cheyne co-founded an independent record label (Aperitif). The group also worked on a second album and Cheyne later spoke to The Sydney Morning Herald about her creative frustrations during the process:

“…On the last album, we found a way to meld both our ideas, which were quite different, into an act. This album was starting to sound the same as the last album, which is not what I wanted. It was my vocals on the samples that Andy would pick. I didn’t want to do samples any more. I wanted to write my own music because – here’s a novel idea – I can. That’s frustrating for me.“

Like Andy, Cheyne continued her music career after the group broke up. (Dig a little deeper and the credits bring visions of sexist trolls gleefully sniping “Don’t you realise that an Executive Producer isn’t involved in the technical side?” and feminist peers raising eyebrows over songs such as ‘Femininity’ but I won’t digress further into that.)

While it’s interesting to see what Madison Avenue have been up to more recently, it seems that (for now, at least) they’re best-known for ‘Don’t Call me Baby’. I’d say that’s no bad thing. Combining the lyrics with the rather objectifying video might make it easy to dismiss as a “funfem” anthem. However, when you consider that we women are still patronised, controlled (or worse) if we dance or dress a certain way, there’s a feminist argument to say the song’s message is actually all the more relevant because of it.

Image description: (Picture appears next to the lyrics quote.) Fuschia coloured cover of the ‘Don’t Call me Baby’ single. This shows a photo of the group on the left between ‘madison avenue’ at the top and ‘don’t call me baby’ at the bottom (both in large-sized sentence-case text). Left: Andy sits and leans back and slightly towards Cheyne. His legs are apart, his hands are loosely together and he is looking at the camera blankly. Right: Cheyne sits in a skirt with her legs crossed and she is looking away to her right. She looks like she could be objecting to being called ‘Baby’.