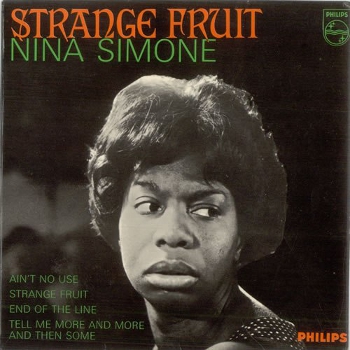 NB: Linked pieces that are specifically about the atrocities referenced in this song contain shocking descriptions and pictures.

Nearly 3,500 African Americans were lynched in the United States between 1882 and 1968. ‘Strange Fruit‘ was written by Abel﻿ Meeropol after he saw a photograph of two victims in Indiana:

“…Copies of such photographs were very popular in the American south, and the images can be easily found on the web… In many cases, the hanged victims are surrounded by smiling white people waving at the camera. They sometimes have their children with them. The horrible truth is that in parts of the south in the early 20th century, the hanging of black people in public was a family occasion; lynching was part of the social fabric.” (The Guardian, 18 September, 2010)

‘Strange Fruit‘ started out as a poem before being set to music and performed as a protest song. Billie Holiday’s 1939 version is arguably the most well known but Nina Simone‘s rendition 26 years later (from her Pastel Blues album) is also highly significant, due to her part in the Black civil rights and Black Power movements. Against the backdrop of this activism, it also seems to tie in with her stated belief in the purpose and function of artists to “reflect the times, the situations around us and the things we’re able to say through our art, the things that millions of people can’t say”. Both versions are, of course, definitive in their own way, but Simone‘s conveyance of anger arguably creates more of an atmosphere of dread and doom than Holiday’s more sad and mournful interpretation. This brings out the chilling content of the poem to full effect.

As Nina Simone herself once said:

“It deals with America & the Black and white problem, really. That is about the ugliest song I have ever heard. Ugly in the sense that it is violent, and tears at the guts of what white people have done to my people, in this country. I mean it really, really opens up the wound completely raw when you think of a man hanging from a tree, and to call him ‘strange fruit’.”

YouTube description: Static black and white face-on picture of a pensive Nina Simone looking down and leaning towards her left with her left hand rested against her forehead. Does not contain any other images.