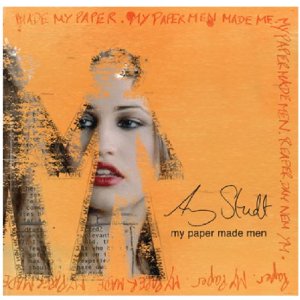 Song of the day: Amy Studt – My Paper Made Man

The UK musical climate throught the 2000’s seems to have belonged to the Amy’s: Winehouse, Duffy, MacDonald, and Studt.

In the light of the success of the other three Amy’s, it’s possible that people have forgotten about Amy Studt.

She was born in London, raised in Dorset and she is from a family of musicians. Studt was signed to Polydor when she was 14 and had a hit in the UK and US with ‘Just a little girl’, a compelling slice of teenage rage. Second single ‘Misfit’, a slightly more arch affair about the kind of high school social world conveyed in Mean Girls arrived a year later, and was if anything an even bigger hit.

Debut album False Smiles arrived shortly afterwards, but an ill-conceived Sheryl Crow cover designed to boost sales in the light of the success of the then new US singer Avril Lavigne flopped and, despite her initial success, Studt was dropped by Polydor. This would suggest that the label was interested in a teenage phenomenon rather than in nurturing a serious singer/songwriter. Studt’s video’s from the False Smiles period would seem to bear this out as well.

In 2007 she toured incognito with Razorlight under the name Jane Wails, trying out new material and overcoming stagefright. She re-emerged in 2008 with the critically acclaimed fan favourite My Paper Made Men and the single ‘Nice Boys’. But despite positive feedback, Studt soon found herself without a label once more.

It’s possible that her more complex songs sat ill with 19, the label who released My Paper Made Men, and they certainly begged her in the later stages of the albums creation for something they could release as a single (hence ‘Nice Boys’). 19 was still owned by Simon Fuller at that point, and while I may be doing the label an injustice in its treatment of Studt given that Amy Winehouse’s debut album Frank had been released by them four years earlier, it says a lot that both Amy’s never recorded more than one album with 19.

Whatever the reasons, it’s clear that the song ‘Paper Made Man’ is a far cry from ‘Misfit’ musically. It’s a sprawling, brooding piece that uses imagery reminiscient of pagan ritual and The Wickerman. Musically, there’s the energy of early Fiona Apple, but it’s firmly Studt in identity as well. My Paper Made Men was her grown up album, whereas False Smiles was the teenage album.

After My Paper Made Men, Studt entered a long quiet period that didn’t end until earlier this year when she began performing with members of Hatcham Social as MercyMadeMe. She appears to be building on and developing her existing songwriting skills beyond My Paper Made Men and it’s great to discover that, despite many setbacks, she hasn’t give up on making music altogether.

There have been re-inventions more radical than Studt’s, from Marianne Faithful to the more recent ones by Kate Nash and Charlotte Church, but the message sent by Studt’s persistence and talent is clear: The struggling music industry needs to watch how it treats its young songwriters, especially now they can reach audiences on their own terms as never before.

Image is the sleeve to My paper made men, the parent album of the single. It shows fragements of Studt’s face underneath a cut out of a paper doll. The words ‘My paper made men’ are written around the edges.

Video commentary: Video is a gallery of promotional and sleeve images of Studt.