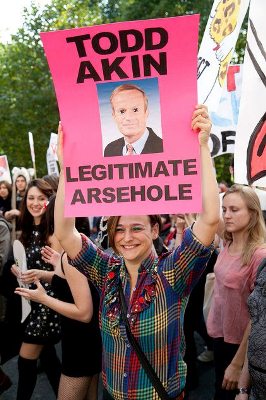 Slutwalk: Whatever we wear, wherever we go, yes means yes and no means no!

This is a guest post by Karis Hanson, who tweets here.

This weekend in London I and hundreds of other people came together for Slutwalk, to proclaim our belief in the radical notion that nobody deserves to be raped.

Slutwalk began in Canada in 2011, as a reaction to a police officer in Toronto who advised that women should avoid dressing like sluts in order to avoid being sexually assaulted. The campaign aims to challenge such victim-blaming attitudes, and to reclaim the derogatory term “slut”: “the intent behind the word is always to wound, so we’re taking it back… We are tired of being oppressed by slut-shaming; of being judged by our sexuality and feeling unsafe as a result”.

On the day, we gathered at the top of Piccadilly where placards were distributed, petitions were signed, and for many, clothes were stripped off. As we waited for the march to begin, campaigners and members of various activist groups dispersed themselves in the crowd to remind us that in the current political climate, Slutwalk is more relevant than ever.

When phrases like “legitimate rape” are used by politicians, and rape allegations are trivialized as nothing more than “bad sexual etiquette”, it is clear that there needs to be a serious debate around appropriate language, and that any grey areas with regards to rape and the law need to be clarified. When we are living through a time of austerity measures that are having a disproportionate impact on women, and the services available for those who have experienced rape and abuse are constantly under threat, we need to confront the government’s patronizing claim that we are all in this together.

A drum began beating, and a wave of elation swept through the crowd as we started to march. Our spirits were high as the sun shone down on us and we chanted in unison:

The list went on, and as we used the word “slut” with such pride and defiance we sent out a clear message: this word can’t be used to wound us any more.

Another popular chant was “Whatever we say, wherever we go, yes means yes and no means no!”. Various placards and messages scrawled on bodies with marker pens reinforced this claim, including “Consent is sexy” and, one of my favourites of the day, “Rape pre-dates mini skirts”. Although Slutwalk was predominantly attended by women, I was happy to look around and see that some men had chosen to get involved, one of whom proudly carried a sign that said “Gentlemen ask”.

I felt like the march was seriously empowering, and to be honest, downright fun! As we reached our destination in Trafalgar Square and the rally began, however, my mood suddenly changed. Anastasia Richardson, the organiser of Slutwalk London, was the first to speak, and as her voice cracked and her rage spilled out, I immediately began to cry. As the speeches continued, we heard harrowing tales of rape and abuse, we were angered by reports of the inadequacy of the police in dealing with such cases, and were reminded of the sobering statistic that of all reported rapes, only 6% end in conviction. It was clear to us that we still have a long way to go.

Despite this, the overall message of Slutwalk remained optimistic. We could see that there is so much more potential for us to ignite change when we are unified, and unified we were. I was gratified by the inclusivity of Slutwalk, with a wide range of speakers including women of colour, a disabled woman, a trans speaker, sex workers, a male speaker, a lesbian speaker, and people of a wide variety of ages. Amongst the accounts of horrific injustices were triumphant stories, and the way in which these speakers were able to share their experiences and frame them in terms of their own personal empowerment showed that they were not victims of sexual abuse; they were sexual abuse survivors.

Slutwalk wouldn’t be able to end all of the problems that it seeks to address with one march. However, along with our march on Saturday, other Slutwalks have taken place this month, such as in the USA and Germany, and since its beginnings in Toronto, Slutwalk has become a worldwide phenomenon. I hope that these demonstrations can help to empower individuals, and help to create a supportive network for sexual abuse survivors. I also hope that Slutwalks will raise awareness, and open up a space for healthy debate on the issues surrounding rape.

The photo of three women carrying a large banner that says “Slutwalk London: We’ve had enough” is by chrisjohnbeckett. Two of the women are smiling and one is wearing a Guy Fawkes mask coloured in brown, plus a purple feather boa. Another woman in front of the banner is in a bra and jeans with “My body, my rules” written on her chest and stomach.

The photo of the little black girl wearing a placard that says “Every rape survivor needs compassion not detention” is also by chrisjohnbeckett.

The photo of a grinning woman holding a placard that reads “Todd Akin: Legitimate Arsehole” is by Derek Bremner.