A problem that stubbornly refuses to budge 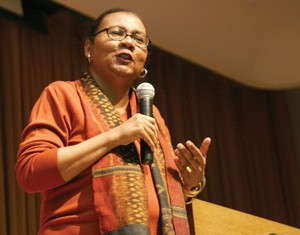 It has always proved interesting, how less critical of the power dynamic some feminists become when they stand to lose their own stake in it. Back in 1981, bell hooks wrote that “labelling ourselves feminists does not change the fact that we must consciously work to rid ourselves of the legacy of negative socialization”. Decades later and this is a problem that stubbornly refuses to budge, in turn holding back feminism from being the truly liberating movement is has the potential to be.

Until feminism is for everyone, it will work for no one. Those women who gain from it with power and a platform should do well to remember that.

There’s been a twitter storm circling around Caitlin Moran, author of How to be a Woman, and purveyor of ‘funny feminism’. After her interview with Lena Dunham, creator of the TV programme Girls, was published in the Times, Moran was challenged on Twitter by a user who pondered why she didn’t ask about the lack of women of colour on the show. Moran dismissively replied, ‘I literally couldn’t give a shit about it‘.

Understandably, many who define as feminists have called her out on this remarkable act of white privilege, and understandably, lots of white women have jumped to Moran’s defence. Some are saying Moran’ words were taken ‘out of context’. Vagenda Magazine is insistent that this is all ‘infighting’, distracting us from the very real issue of patriarchy.

Caitlin Moran blithely proclaims that she has no idea why a feminist screenwriter’s continual lack of inclusion of black women in her plots is a problem. She cannot comprehend that the exclusion of marginalised people in pop culture representations is actually racist, equating the lack of representation with not having someone Chinese in her house.

It’s time to have an honest conversation about racism and white supremacy. There have been valiant efforts to end racial discrimination, and they’ve found themselves enshrined in law. Now the word ‘racism’ itself has become a linguistic hot potato. Nobody wants to be accused of it, those suffering it are scared to call it out- and if we do, we’re often branded as worse than the racists for highlighting the fact that it exists. Modern day feminism is not exempt from this.

Racism is understood to be embodied in a word, or inherently and solely in an action – a punch outside a pub door, or a tragic attack. Well, I’ve got news for you – racism doesn’t work that way. It’s no longer that blunt, heavy hammer of contempt my grandparents faced when they moved to the UK sixty years ago.

Racism in 2012 works in a covert manner. It exists in the disgust of diehard Hunger Games fans, sorely disappointed to see the film version of their beloved plots cast black people as main characters. It manifests in skin bleaching creams, and black pop stars growing progressively lighter skinned as they reach the peak of their fame. Racist words and actions are symptomatic of a society that reinforces and endorses the message that white skin is the right skin.

When Moran says she ‘doesn’t give a shit’ about the representation of Black women in a TV programme, it’s important to remember her comments are part and parcel of a society that upholds white as the norm. That’s how the dynamics of race and racism in our society work, and without any critical analysis, the people who benefit from it will continue perpetuate it. Feminists included.

Hooks also wrote that ‘it’s obvious that many women have appropriated feminism to serve their own ends, especially those white women who have been at the forefront of the movement’. Caitlin Moran is just part of the problem. When feminists can see the problem with all male panels but can’t see the problem with all white television programmes, it’s worth questioning who they’re really fighting for.