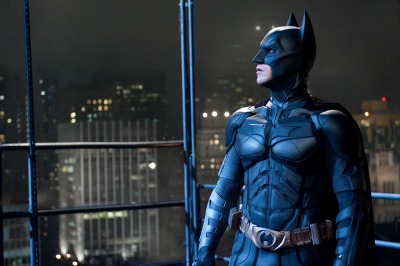 As both a feminist and an absolute film lover I often find myself trapped in a puzzling paradox: that of finding a movie wonderful, even not wanting to change it one bit, and yet profoundly regretting the role that is given to women within it.

That feeling dawned on me again during the screening of the new Batman film, The Dark Knight Rises (Christian Bale as Batman in the first picture below). I find director Christopher Nolan genius and his whole filmography almost flawless; yet beyond the enjoyment his movies give me, if I force myself to take a little perspective on his work, I am struck by the complete disregard he has for his female characters and I have to admit it is rooted in misogyny.

Nolan is a great analyst of the “human soul” and the forces that drive men to go to the extremes of either horror or grandeur. This is why I love his work so much in the first place: how he deals with male characters’ psychology is tremendous. These men are always complex, tortured, torn between good and evil, frantically mad or in a breathless search for justice. The subtleties and intricacies of their many layers can only be commended.

As soon as we turn to his female characters, we are quickly forced to admit that they are one-sided, one-dimensional, archetypal roles, with often no other purpose than to push the male hero in one direction or the other

Who did not admire the way Nolan constructed Joker’s madness in The Dark Knight? Angier’s spiralling obsession to crush his rival in The Prestige? Leonard’s extreme determination to find his wife’s killer despite his terrible condition in Memento? Not to mention Batman’s ethical dilemmas, his heroic stands, his inner demons. I could go on forever, but it is clear that even though he has only made seven movies, Nolan can already be qualified as one of the greatest character writers of our time. Wait – I mean one of the greatest male character writers of our time.

Because as soon as we turn to his female characters, we are quickly forced to admit that they are one-sided, one-dimensional, archetypal roles, with often no other purpose than to push the male hero in one direction or the other. They have no complexity or motivation. Sometimes, as in the case of Insomnia, they purely don’t exist at all (Hilary Swank’s character is used merely to put extra pressure on Al Pacino’s, but the core of the movie is the duel between two men).

I realised this when I started noticing that actresses in Nolan’s movies are usually either rather bad or can’t hold a candle to their male partners. Then I figured out that it is not because the actresses are bad, it is because Nolan does not care about them, or at least does not care to direct them in the way he does his male protagonists.

However, he often cares to kill them so they give the said protagonist a storyline to begin the movie. In The Prestige, Angier and Borden’s murderous rivalry starts with Angier’s wife dying; in Memento, Guy Pearce’s character’s only motivation is to find his wife’s killer; in Insomnia, the original investigation begins with the murder of a teenage girl; in Inception, Dom Cobb is eaten alive by the memory of his wife’s suicide; in Dark Knight, Rachel’s death creates the crucial Two-Face character, etc.

Now let us take a closer look at the women who remain alive. They are blatantly excluded from Nolan’s favourite themes of obsession, search for purpose, crucial moral dilemmas and, of course, also the one he is so skilled at depicting, an epic duel between two men which often ends in death. I have not seen his first film, Following (1998), but I will comment on all the others, except The Dark Knight Rises to avoid spoilers. 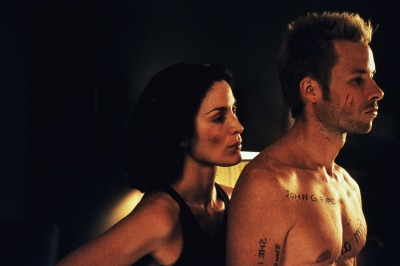 Memento (2000): Carrie Ann-Moss’ character Natalie is a relatively interesting one, but not one Nolan is interested in. She is a somewhat film noir femme fatale archetype: mysterious, seductive and ends up betraying the hero for revenge. She may be one of the strongest-minded females of Nolan’s entire filmography, but she only appears in a few scenes of the movie, and cannot hold a candle to Leonard’s dead wife who, without being there, is always on his mind. Many viewers in fact struggle to remember Natalie’s name or function in the film some time after seeing it, whereas they distinctly remember Leonard, Teddy and the “Sammy Jenkins” storyline. Natalie is only a means to an end: showing the viewer how deeply Leonard’s condition affects him.

Insomnia (2002): the female character Ellie Burr is played by Hilary Swank. At first glance, nothing about her portrayal appears misogynistic. Yet, she only proves useful when touching upon Pacino’s guilt and unknowingly increasing his insomnia. The real plot of the movie is of course the deadly duel between Al Pacino and Robin Williams, a recurring theme in Nolan’s work: two strong-minded men who embody two opposite entities, values or points of view fight to death (also found in The Prestige and The Dark Knight). In this manly struggle a woman appears to have no place. 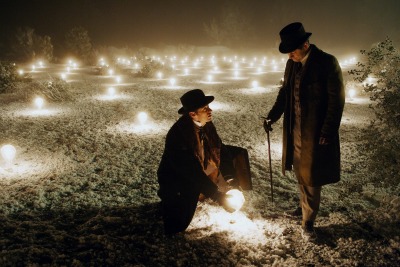 The Prestige (2006): it starts with the death of a young beautiful woman with whom the main character is in love. His friend then becomes his worst enemy and for the whole film we are shown how one’s obsession can become one’s folly and ultimately one’s demise. The two men have two love interests respectively: Rebecca Hall (Sarah) and Scarlett Johansson (Olivia). The first one is a naïve, clueless and loving wife and mother. She doesn’t understand why her husband’s soul is so tortured. She is pretty, but has no depth: a decorative, one-sided lady. The second one resembles Memento‘s Natalie because she is more seductive, attractive and two-faced. However this is quickly undercut by the same cluelessness as in Hall’s character: she doesn’t understand why she is not loved, and simply yearns for a quiet family life as opposed to the intricacies of her lover’s secrets. Meanwhile, both Jackman’s and, especially, Bale’s characters are incredibly well thought-out protagonists, with their many sides, their tremendous evolution, their twists and turns, their well-kept secrets and their deadly duel. Michael Caine is the protective mentor, David Bowie the eccentric scientist, but who remembers the insignificant wives?

Rachel is killed halfway through the movie and there are no other female characters in The Dark Knight. Not one. Looks like Gotham City is a man’s, man’s, man’s world 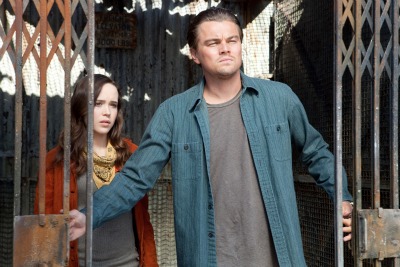 Inception (2010): The cast is almost entirely made of men. DiCaprio, Gordon-Levitt, Hardy, Murphy, Watanabe, Caine, Dileep Rao, Berenger and Postelswaithe. This team of extremely clever scientists, doctors and businessmen contains only one woman: Ellen Page, the clever-but-unattractive sidekick. The other female character is the sexy dead wife (again), played by Marion Cotillard in a short black dress with a French accent, the object of DiCaprio’s dreams. She has no other purpose than to be beautiful and tragic. She is not strong-minded or particularly intelligent, she is a depressed wife and mother.

Batman Begins (2005): again, what may be most shocking is the ratio of male to female characters. The “Characters” section of the Wikipedia page include: Bruce Wayne/Batman, Alfred, Ra’s Al Ghul, Jim Gordon, Lucius Fox, Johnathan Crane/The Scarecrow, Carmine Falcone and… Rachel Dawes, played by Katie Holmes. There are eight main characters and amongst them one woman, one woman who is essentially Bruce’s love interest, played by a shy and not-very-striking Katie Holmes, even if her devoted commitment to justice in this movie does make her a strong character. However, that aspect of Rachel’s character is completely erased in the following film, where she is transformed into a mere element of a love triangle and the necessary victim halfway through the movie. 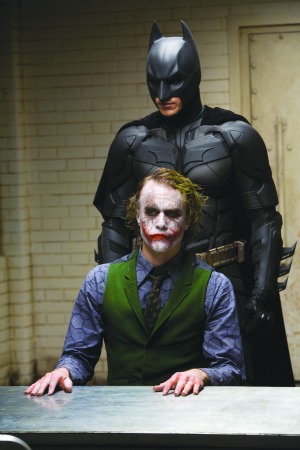 The Dark Knight (2008): let’s do it again. List of main characters: Bruce Wayne/Batman, The Joker, Harvey Dent, Alfred, James Gordon, Lucius Fox, Sal Maroni, Commissioner Loeb, and Rachel Dawes. That’s nine characters, one woman. And even though this time Maggie Gyllenhaal is arguably better suited for the role and more charismatic than Holmes, the role of Rachel is only used as a device to trigger the birth of Two-Face and the deep darkness in which Batman/Bruce wallows, providing the hero with a new dynamic. Rachel is killed halfway through the movie and then, for the remaining hour or so, there are no female characters in The Dark Knight. Not one. Looks like Gotham City is a man’s, man’s, man’s world.

I will not comment on Dark Knight Rises as it is too early to spread spoilers yet but, needless to say, my impressions were the same regarding the characters of Rachel (the dead lover keeping Bruce a recluse), Miranda (the plot decoy who gets him out of his cave) and Selina Kyle, the sexy catwoman in tight leather suit using her charms to fool men.

So why are the women in Nolan’s films prohibited from taking part in the intricacies of his plots? Virginia Woolf, in A Room of One’s Own, wrote: “Women have served all these centuries as looking-glasses possessing the magic and delicious power of reflecting the figure of man at twice its natural size.” Fiction has long been men’s territory because women were deemed too “weak” to be allowed in. They were stuck in the role of the loving wife or the loving mother in whose eyes men could build their own ego. Had they been made challenging, complex individuals, men would not look as good, as challenging, as complex.

The problem with Nolan’s women is that they are used as a means to glorify his men. Maybe one-dimensional female characters are the way for male characters to appear so well written. In the mirror of these inferior characters, the male counterparts are reflected twice as good. Whilst their background and what they do matter very little, the women are romanticised and used as powerful drives for the men to act – and so, as Woolf wrote in the same book: “imaginatively she is of the highest importance; practically she is completely insignificant.”

A fine scriptwriter such as Nolan should know how to avoid that trap. And the film industry, generally male-dominated (as shown, for example, by the last Cannes Film Festival official selection where not a single one of the filmmakers was female), should start opening more doors to women directing fiction.

Anna Kessler has just completed her BA in Politics and International Relations. She currently lives in Paris and intends to get a real job soon, but in the meantime she goes to the cinema and then writes about it