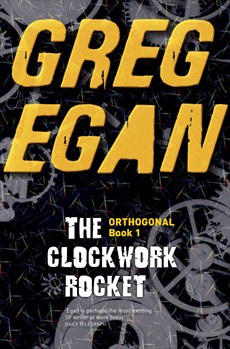 Radical ideas about gender and sexuality – rooted in a strong respect for individual autonomy – have long featured in Egan’s writing. Schild’s Ladder treats ‘sexual chemistry’ literally: its post-human characters develop genitals specifically complementary to their current partners when their interactions trigger hormonal changes – a process dependent on mutual consent. Works like Closer and Distress explore the implications of various body modifications for sex and gender. Cocoon sees a gay private investigator embroiled in the development of technology intended to prevent homosexuality. Egan’s protagonists – often scientists and mathematicians – are male, female, non-binary, “asex”, straight, gay, bisexual, asexual in enormous, fuss-free variety. (That said, binary trans characters are not common, and some jokes about a trans minor character in Zendegi left me cold.)

[Women] navigate a familiar nuanced patchwork of institutional oppression, unspoken prejudice and internal conflict, while being sustained, if lucky, by social pockets of support

In Orthogonal, Egan doesn’t just casually scatter brilliant ideas about gender as part of the scenery. Instead, struggle against systemic gender prejudice and an exploration of its relationship to biology and reproduction form major parts of the story.

This resonates strongly with me even though the novels aren’t about human beings, but aliens. Egan calls them “women” and “men”, presumably to draw upon existing associations for readers, but the characters’ bodies (not humanoid in shape) and their experiences of gender are very different from ours. Women “give birth” by fissioning into four; in doing so, they cease to exist as individuals. The offspring comprise two male-female pairs; a pair typically reproduces together when mature. Partnered reproduction involves an exchange of signals between bodies, whereby the male partner (or “co”) forms a strong emotional bond with the children produced from the flesh of the female co.

This raises interesting parallels – and contrasts – with human beings. Women in Orthogonal are larger than men. Childcare is quintessentially male. Childbirth, though a welcome part of many women’s aspirations, extinguishes their independent identities. Some see girls’ education as wasteful, since women are expected to give birth early enough for their cos to have time to raise the children. Each pair of cos must negotiate the woman’s desire for a full life and their – shared or conflicting – wishes regarding procreation.

In The Clockwork Rocket, sexism is portrayed with depth: a palpable and not at all cartoonish presence. Women face pressure to give up their autonomy without being uniformly brutalised by broody cos. They navigate a familiar nuanced patchwork of institutional oppression, unspoken prejudice and internal conflict, while being sustained, if lucky, by social pockets of support.

Protagonist Yalda is a “solo”: her mother split into only three, so she has no co. Rather than seeking a “co-stead”, she pursues scientific inquiry. She meets like-minded women – other solos, widows, fugitive runaways from their cos – who form a proto-feminist network. They introduce her to holin, a banned drug which inhibits involuntary spontaneous fission (a threat to older women). When one succumbs to this fate, her friends take on the unorthodox role of female parenting. And though no concept of recreational sex appears to exist, there are hints of lesbian romance.

Egan’s ideas are thrilling and his writing is always deft. It’s a treat for me, as a long-time fan and feminist, to see his brilliance turned so squarely toward reproductive autonomy

There is a reversal of the SF chestnut of light-speed space travellers returning to earth after a short subjective time to find lifetimes have passed. Yalda leads a group into space, where their descendants will have time to develop and to return with technological advances that will rescue the home planet from a serious threat in only a few years of its subjective time. (This is a function of the unusual physics of the Orthogonal universe – video explanation here). Because this involves leaving home forever, spacecraft Peerless is staffed disproportionately with solos and runaways, representing an opportunity for a new dynamic in sexual politics. 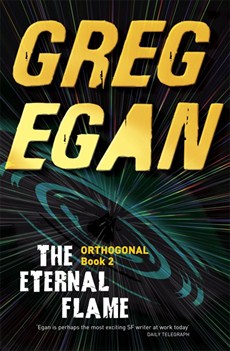 In The Eternal Flame, several generations later, food is scarce, so women on the Peerless undertake a semi-voluntary “famine” to convince their bodies to fission into only two. Carlo, tormented by his co’s suffering, attempts to discover how to induce this effect without actual food deprivation. He accidentally develops a technique which allows women to produce only one child at a time and – revolutionarily – survive the process. This could end both the pain of the famine and the heartache of the female choice between reproduction and continued life – but all the offspring are female, so if adopted by all, this would mean the literal end of men. Unsurprisingly, political struggle ensues.

The immediate conflict is ultimately resolved by the bravery of astrogator Tamara, whose co has tried to coerce her into eschewing space flights and reproducing, arguing that “the flesh of our mother is the flesh of our children; however long you might borrow it, it’s not yours.” With this history of abuse, she has a heightened stake in the battle for a future where female life is not, as she puts it, a mere “tenancy”.

Egan’s ideas are thrilling and his writing is always deft. It’s a treat for me, as a long-time fan and feminist, to see his brilliance turned so squarely toward reproductive autonomy. Yet I hesitate to recommend Orthogonal to a general audience. Intertwined with the politics is a detailed reimagining of major 20th century physics discoveries in an alternate universe: the books contain lengthy disquisitions on matters like optics, spherical harmonics and quantum spin, illustrated with graphs, no less, and this is not a bug but a feature. Egan writes for those who love complex physics and mathematics. Without the necessary patience or background to work through it thoroughly, this means skimming or even skipping (as I confess I do) large chunks of text. For me, the rich payoff, even if only in the other strands of story, makes this worthwhile – especially in The Clockwork Rocket, where I found the science more accessible – but your mileage may vary.

Jolene Tan is The F-Word’s fiction reviews editor and a member of the blogging collective.