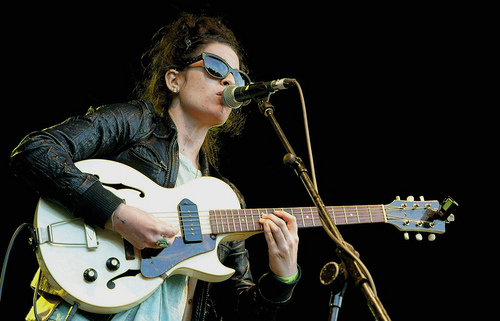 Another record from a star storyteller

“Dig it out of the basement, out of the discard and onto the record player,” Jesca Hoop urges on ‘Dig This Record’, a chunky, tribal tune in the heart of The House That Jack Built. By this point in the proceedings, most listeners won’t be able to resist doing some digging.

Hoop’s third album is a collection of thickly-textured arrangements, tangled melodies and startling lyrics that demand a closer look. Bearing in mind her back story, it’s no surprise this lady’s got a few stories to tell. A folkie raised in northern California, Hoop fled her Mormon family in her teens to live in the wilderness, including a stint on a rehabilitation project for children. She has a more succinct way of putting it: “I was raised Mormon until I was 16, and then I fucked off.”

As if by magic, she landed a job as Tom Waits’ nanny, her application possibly fast-tracked because she had little clue how big an artist he was until, well-installed chez-Waits, she attended one of his gigs. After taking some tentative steps into the wild world of music herself, Hoop’s whimsical folk tunes and murder ballads caught the attention of Elbow’s Guy Garvey, who inexplicably convinced her to relocate to his native Manchester.

Any quick internet search on Hoop will bring up this jolly tale and no doubt she’s sick of hearing it, but what the hell, it’s a good story, and the music is steeped in it. She’s a free spirit on a quest to reconcile her roving urges with jarring questions about the things that pin her to the earth – her skin and bones, her family, her history. She’s also got the earthy confidence that comes with having built a career slowly and without fanfare, backed by some pretty impressive mentors.

This is a woman with her heart and soul on her sleeve, embracing the platform she’s travelled far and wide to gain. She has a reputation for keeping her live audiences enthralled, telling deeply personal stories between songs.

In her craving for new sounds and textures, blood-red lyrical sentiments, occasional whimsy and dramatic headgear, Hoop has a foot firmly in the camp of other-wordly female singers – Vashti Bunyan, Kate Bush, Björk, Tori Amos and Natasha Khan. She brings the sun-soaked wilds and rootsy traditions of the US and the gritty rhythms of urban Manchester together to put her unique stamp on things.

The album opens confidently with ‘Born to’, its looped-up jangly guitars and clean Ladyhawke-like vocals setting the tone as we “Wind her up and watch her go/Spin her out of dust into rock and fire.”

‘Pack animal’ yanks the dreamy listener to the bedroom mirror, all husky and intimate as Hoop ponders her physical presence: “Dear reflection, you’re my oldest friend.” Hoop talks of cloistering herself away and “going stir-crazy” while writing this album, not being aware if she was talking to herself or to someone else. She captures this in the ‘Born to’ video which sees our heroine alternately tearing her hair out and strumming her guitar in front of the mirror, then blossoming into some sort of paint-splattered Medea figure:

‘Peacemaker’ is the album’s battle-cry and crowning glory, defying categorisation. Among the driving beats and distorted vocals is a kinky power-play straight off the set of Gladiator. “Come and I’ll unlock your chain link armour… absolve your blood-stained honor,” she commands. The song is a delectable tribute to Aristophanes’ Lysistrata, an ancient Greek play in which the women of Greece go on sex-strike to end a war and wangle political power from the men.

The really sombre moments are contained in the songs about Hoop’s family, in the wounds she displays as a result of her father’s depression and subsequent death. The title track is a stripped-back ode to a flawed paternal figure, finding the Hoop siblings rummaging in their late father’s worldly belongings looking for clues of his true identity: “The stories are a revelation/all of a brother and a sailor and an honourable man.” The folky ‘DNR’ channels the Breeders’ softer side and explores Jesca’s dealings with her father’s sticky personal life, faith and attempt at suicide.

But the album never loses its sense of fun. Hidden among the dark dramas of Hoop-world is a refreshing pop nous – a frisky lyric or a playful melody is always waiting around the corner to remind us of the restorative power of music, as evidenced in the hopscotch rhythms of brat-attack ‘Hospital’ or the yelpy girl-group sexuality of ‘Ode to Banksy’. The video for ‘Hospital’ is like a Katy Perry pastiche, with Jesca and friends frolicking around in ice-cream coloured pyjamas with

Hoop’s got a bit of an obsession with sleep. She keeps a blog called You are innocent when you dream – a Tom Waits lyric – in which she describes her “explicitly vivid” dreams. It’s fitting, then, that she ends the album with a joyful swoop of a song celebrating the bliss and freedom she finds in sleep, finding peace from the questing, the mental and physical pressures, the stress and strive of daily life.

Image is of Jesca Hoop performing live at the Rochdale Feelgood Festival on September 3, 2012. Image is by Man Alive! and is used thanks to a Flickr creative commons licence

First video: This is the promotional video made to accompany Jesca Hoop’s single ‘Born to’. It is made up of footage of Jesca singing and playing guitar, footage of her sitting calmly in front of a mirror, and footage in which she applys increasingly eccentric makeup and becomes increasingly agitated and dishevelled.

Second video: This is the promotional video made to accompany Jesca Hoop’s single ‘Hospital (to win your love)’ In this video Jesca and friends dance in an excessively twee fashion while wearing pastel colours. Jesca has her hair in bunches and is sporting painted on freckles. She alternately has a black eye, a broken arm, or both and is dressed up as a parody of the doll like excessively pink princess of popular fairytale. Excessive amounts of sugar and sprinkles are deployed as additional makeup

Louise is a copywriter based in London. Louise is looking forward to an autumn brightened up with gigs and clompy boots.