A hard issue with a soft premise 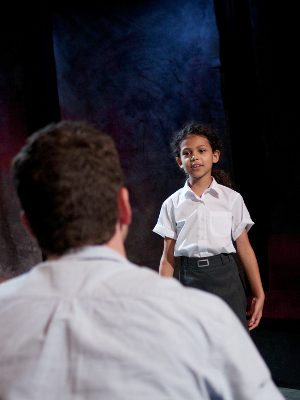 The promotional blurb for Chris Dunkley’s new play The Soft of Her Palm does not shy away from the fact that the play’s subject is domestic violence. A common approach when artistically portraying abusive relationships is to slowly reveal an insidious violence that was initially masked from the audience. Dunkley tries to do something different: before the play has even started, audiences are aware of the themes in the work. Yet Dunkley still promises to shock the audience with an entirely unexpected revelation about the nature of Phil and Sarah’s relationship, claiming that “allegiances shift as the truth is slowly revealed”.

The play starts with Sarah loudly arriving at Phil’s house. She has crashed her car on his street and is extremely agitated. The script makes no efforts at this point to paint Sarah in a sympathetic light. “I thought ‘how dare you?…How dare you interrupt my day with this little picture of death…?'” she intones, suggesting she is utterly self-absorbed and indifferent to anybody else’s pain. Phil repeatedly enquires whether anyone has been hurt in the accident but she ignores his questions to wallow in her own anger. We never find out the answer to Phil’s enquiries.

We discover that Phil and Sarah have recently separated. As Sarah monopolises Phil’s space, freely and loudly inviting herself into the house and helping herself to wine from the kitchen, Phil grows increasingly uncomfortable. He asks Sarah to leave and accuses her of following and spying on him over the past few months. The context of their relationship is still unclear. The two argue over finances. At some point Sarah’s accusations transform into desperate appeals for Phil to take her back. She begs, refusing to leave. The volume increases; it is clear neither is listening to the other. Then Phil strikes out, hitting Sarah to the floor.

The first scene of The Soft of Her Palm raises some questions. What is the context of Phil and Sarah’s relationship? Does he have a history of violence? Is he, in addition, a child abuser? 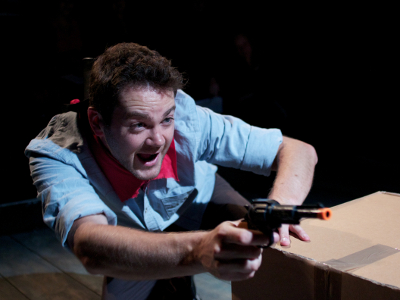 The aftermath of the physical violence is surprisingly calm. As Sarah lies on the floor, Phil doesn’t react. She picks herself up. The two speak again, more quietly, calmly. Sarah does not refer to the violence. She does, however, make reference to her daughter, Poppy. She accuses Phil of sexually abusing the seven-year-old and tells him that she has made a report to the police and that he can expect them to turn up soon. Then she leaves.

The first scene of The Soft of Her Palm raises some questions. What is the context of Phil and Sarah’s relationship? Does he have a history of violence? Is he, in addition, a child abuser? Why is Sarah willing to stand up for her daughter but not for herself? Is Sarah’s unpleasantness a result of the way Phil has treated her? Or is Phil’s physical abuse an unacceptable response to Sarah’s emotional and psychological abuse?

What emerges as we travel back with Phil and Sarah is that Phil is a loving and supportive stand-in parent to seven-year old Poppy. He is a good friend and boss, a hard-working entrepreneur and also charming, patient, ambitious and compassionate. In brief, he appears to have no shortcomings.

This, then, is Dunkley’s twist: Sarah takes a good man and ruins his life 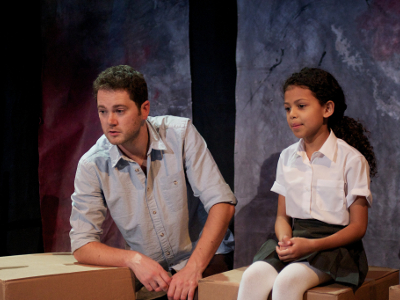 In contrast, Sarah is painted as that most basic of stereotypes: the emotionally unbalanced, manipulative woman. She exploits her daughter, using her as a pawn to get what she wants, taking advantage of Phil’s desire to protect Poppy and turning it against him. She attempts to exert control over all areas of Phil’s life, preventing him from seeing close female friends and convincing him to accept financial support from her father so that his business is now dependent on keeping Sarah and her father happy. At one point she even ‘cries rape’. In addition to this emotional, psychological and financial abuse, the history of the physical abuse also starts with a shrilly played Sarah.

“It was a status thing,” Phil says, explaining that after Sarah cracked his head open, she continued to kick him as he lay bleeding on the carpet. “I want to rape you. Every day I want to rape you and I’m sorry for it,” Sarah tells him, as he lies unconscious on the floor. This, then, is Dunkley’s twist: Sarah takes a good man and ruins his life. She manipulates and bullies him, physically abuses him and then bangs her own head against a wall so that she is the perceived victim. She accuses Phil of rape, violence and child abuse when all the while she is the perpetrator of these. “Watch out”, Dunkley’s play seems to scream: things are not always as they seem. Sarah is no victim; Phil’s act of violence was an isolated one following more than a year’s abuse. Men can be victims too.

Violence against anybody, including men, is a serious issue and abuse is definitely not limited by gender, despite being a gendered issue. Yet in trying to highlight the issue, Dunkley’s play falls back onto the most excruciatingly simple stereotypes and cultural assumptions. The play lacks any nuance and offers no explanation for Sarah’s behaviour, merely resorting to old-fashioned notions of hysterical, manipulative women.

In one scene entirely lacking in subtlety, Phil asks Sarah’s father, a troubled man turned psychotherapist, what he would do in a couples’ counselling session if one individual took him aside and revealed they were being abused. “Refer them to a charity – Women’s Aid,” the father replies. He cannot even contemplate the idea that men can be the victims of abuse; he laughs out loud in Phil’s face. Clearly the issue of violence against men regularly meets this reaction in society and Dunkley wants to challenge expectations and assumptions about gender relations. That, though, is not an excuse for reverting to damaging and basic portrayals of women. You do not raise awareness of one troubling issue by adding to the perpetuation of another, false rape allegations being a prime example here.

The play lacks any sophistication of understanding of the pattern of violence against women overall, who statistically suffer a far greater severity and frequency of abuse, or of the complexities of violence against men, beyond its apparent mantra ‘good man good, controlling woman bad’

Of course, in a play about domestic violence directed towards men, the female character is not going to be a strong, positive role model for women. It’s important now to clearly state that women are not themselves perfect paragons of virtue and I would have had just as much trouble had Sarah been presented as such. Dunkley’s play was always going to reveal uncomfortable truths about the nature of abusive individuals and Sarah was always going to be an ultimately unlikeable and despicable character. The problem with this particularly simplistic play is that Sarah’s absolute badness is not explored through her individual traits but is too simply connected to the age-old easy characterisation of the crafty and cunning but emotionally unhinged woman who seeks absolute control by using her beauty to ensnare a man whose life she then ruins, whilst failing maternally by selfishly exploiting her own children.

Dunkley wanted to challenge society’s assumptions and perceptions around domestic abuse by showing that men can be victims and women can be perpetrators. While some audience members may walk away with a fuller understanding that violence can work both ways and take varying forms, far more will walk away with a crude appreciation of what this rarer form of abuse looks like. The play lacks any sophistication of understanding of the pattern of violence against women overall, who statistically suffer a far greater severity and frequency of abuse, or of the complexities of violence against men, beyond its apparent mantra ‘good man good, controlling woman bad’. These very basic stereotypes pose a risk that some audience members will even be increasingly mistrustful and incredulous of those women who do speak up about the abuse they have suffered: assuming that they are wrongly claiming victimhood, as Sarah does, while manipulating their partners. All this play ultimately does is feed into existing troubling stereotypes without aiding either gender in the fight against domestic abuse.

The Soft of Her Palm is playing at Finborough Theatre in London until 23 October. Pictures are used with permission. Image Copyright: Stageshots (London).

Shoshana Devora is an English graduate with a strong interest in feminism and LGBT and BME issues. She has a healthy addiction to tea and a less healthy obsession with debating