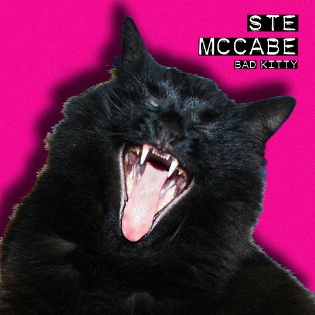 Ste McCabe came to my attention as the organising force behind Pussy Whipped, a regular night in Edinburgh showcasing queer and female artists. McCabe has been making music since 2006, describing himself as a “politicised queer, feminist, working class bastard who likes to make people dance with his rantings”. After enjoying his set at the Pussy Whipped festival, I was looking forward to Bad Kitty as the sort of album to vociferously agree with while inebriated on dance-floors at weekends. In this regard, Bad Kitty does not disappoint.

Bad Kitty is Ste McCabe’s third album but the first I have had the pleasure of listening to. It does feel like a later piece of work though; a confident achievement of an artist who understands the importance of timing and pace. The whole album is high energy, with each song rattling along apace and nothing outstaying its welcome.

Bad Kitty enjoyably balances humour, politics and music. Topics include the hypocrisy of establishment equalities policy makers, neo-liberal conservative ideology, homophobia, consumerism, hate crimes and violence. Despite the importance and seriousness of these topics, they never weigh the album down with the sort of po-faced preaching that political artists can sometimes fall foul of. McCabe’s wry humour shines through on this album. His songs are funny but never mere novelty items.

‘Did You Really?’ makes for a provocative opening, repeating “I worked my way up from the bottom” as incessantly as a token former working class Tory on Question Time. ‘Did you Really?’ is a fun track, juxtaposing the line “I worked my way up from the bottom” with career examples such as “charity mugger” and “M&S latter server”. Ste questions both the idea and the relevance of this statement through his irresistibly catchy repetition. ‘Did You Really?’ is indeed the perfect song to dance to at the end of a long week as a charity mugger or M&S latte server.

Other highlights include ‘Accessorise’, an anthem for the dispossessed which ironically affirms consumer life paths and narrow-minded mainstream assumptions. “Everyone knows that fat is vile on a lady,” McCabe knowingly proclaims.

‘City Chambers’ forcefully lambasts the inadequacies of local government when it comes to failing to identify and address the violent reality of oppression and hate crime. “When you know the murder is not a one-off, you are welcome to the yearly equality reception, who do you work for?” McCabe’s lampooning of establishment efforts to engage with communities will ring awkwardly true with anyone who works in equalities or the voluntary sector. ‘City Chambers’ is perhaps McCabe’s most obviously comic song, despite his focus on the violent reality of queer hate crime. His humour is founded in righteous rage.

‘Judge Scratches His Head’ asks “Why did they kill that man?” and comes to the conclusion that it is perhaps time to look at the perpetrators of violent crime rather than the victims, echoing the demands feminists have been making for decades. ‘Judge Scratches His Head’ is another great dance-floor track, perfect to play at top volume while raging at the latest infuriating press coverage of a gender or sexuality related murder.

‘Conversion Therapy’ suggests cures for the perversions inherent in writing columns for The Daily Mail and The Express. “I know that it’s tough for you, but dykes are here to help you through… with lessons in humanity too.” In some ways, right wing tabloids and their columnists are easy targets, but that does not mean it isn’t fun to turn the tables on their hateful rhetoric.

As ever, McCabe cuts to the chase and questions the assumptions inherent within our current system

The album’s closing track ‘Harrowing Breakdown’ feels like an anthem for anyone who has ever experienced any kind of burnout or mental health crisis. “Every decent person will have a harrowing breakdown, sitting with a counsellor crying their eyes out.” As ever, McCabe cuts to the chase and questions the assumptions inherent within our current system: “Selling your body is vile, but selling your brain is so worthwhile, selling neither is what we call being parasitical.”

Throughout the album, McCabe challenges the pressure to have 2.4 children, be a ‘success’ and follow the hetero-normative scripts for life laid down by British society.

Bad Kitty is packed full of queer feminist pop punk, with firm roots in 1990s riot grrrl and indie but with a punchy political update. As with any album, a few tracks are forgettable but, to McCabe’s credit, they number no more than two out of 12. His album is much more killer than filler. Brimming with irony and uptempo electro, it’s a record that I can see myself returning to again and again.

Bad Kitty was released 29 October and can be purchased from Cherryade Records. Ste McCabe is currently travelling around Europe playing at a variety of cities, starting with London 3 November. You can find details of this tour here.

Liz Ely lives in Edinburgh where she can be found drinking coffee, moaning about the Tories and wearing hats