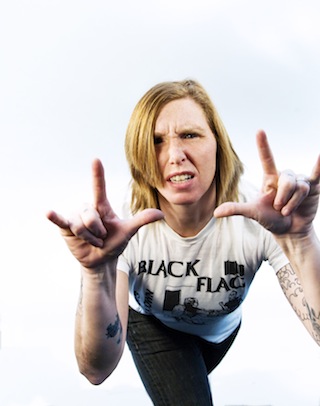 Hole story of Schemel not Love

Look back across the decades at the established canon of rock’n’roll greats and you will find a number of common themes and motifs: the legendary axeman, the tragic songbird, the troubled genius and the maverick producer. Look to the biographies, essays and biopics and you will see these roles played out again and again: Jimi Hendrix, Janis Joplin, Tim Buckley, Joe Meek…Slash, Amy Winehouse, Kurt Cobain, Mark Ronson.

There tends to be little space in these narratives for the rhythm section, the drummers and the bassists. Think of a famous drummer and you’re apt to name Keith Moon or possibly Animal from the Muppets, who was probably inspired by Keith Moon. Think of female drummers and you realise they are not only rarely featured in the textbooks of rock (Mo Tucker being the notable exception) but they rarely seem to exist at all.

Patty Schemel, who was the drummer in Hole for six years, is a bright star on this rather empty sky. She proved her talent again and again on some of the biggest stages of the 1990s rock scene (Reading and Lollapalooza to name but two) and became an inspiration to young women who also wanted to form bands and/or play the drums. She wasn’t a gimmick and, unusually, she didn’t learn to play in public but had played the drums from the age of 11.

Hit So Hard, a documentary by P. David Ebersole, makes use of archive footage from Hole’s tours, rehearsals and home videos alongside interviews with Schemel’s musical contemporaries, friends, relatives and fans to tell her story. In some ways it is a story that fits as easily into the rock’n’roll canon as those of, say, Marianne Faithful or Eric Clapton – there are drugs, deaths and incredible highs and lows – but in many ways it is different. Hole was not the average ’90s band. Singer/guitarist Courtney Love and guitarist Eric Erlandson formed the band in 1989 inspired, like contemporaries Nirvana, L7 and Babes In Toyland, by the 1970s and 1980s punk scene: by bands like X and the Melvins as well as, in Nirvana’s case, by UK postpunk bands such as The Vaselines, Young Marble Giants and The Raincoats.

Hole released their first album, Pretty On The Inside, in 1991. It is a largely unlistenable mess of garage rock and screaming rage, with songs such as ‘Teenage Whore’ and ‘Dicknail’ cementing an image of Love in critics’ and listeners’ eyes alike as a roaring sea of feminist rage in a supposedly postfeminist world.

While the drug use of Cobain, Love and Pfaff is well known, this documentary reveals that Schemel had a history of abusing both alcohol and drugs prior to joining Hole and that her time with the band didn’t help to curb her excesses

Schemel came into the picture in 1992, when Hole were in the throes of writing their second album, Live Through This, and bassist Kristen Pfaff joined a year later. While the drug use of Cobain, Love and Pfaff is well known, what this documentary reveals is that Schemel had a history of abusing both alcohol and drugs prior to joining Hole and that her time with the band didn’t help to curb her excesses. There were times when she was so drunk she would fall off the drum stool or had to be dragged along the floor to bed and there is footage of her on tour with the tell-tale gaunt and pallid face of the heroin user. 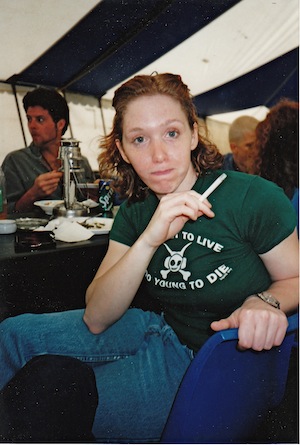 Some of the most heartbreaking footage in this documentary doesn’t relate to Schemel but to Pfaff. Pfaff took a fatal overdose of heroin in June 1994, just two months after Kurt Cobain killed himself. The footage of Love and Erlandson discussing the identity of the dealer who sold her the drug is stark in its graininess and matter-of-factness, while also poignant in its sadness and barely suppressed anger. Love’s comment that Pfaff’s death was completely overshadowed by Cobain’s and how unfair this was also reveals the arbitrary nature of rock’n’roll legacies.

The entry of Melissa Auf der Maur into the band at a point when they had just lost both Cobain and Pfaff, and with a new album to tour and promote, is an uncomfortable moment. In interviews Auf der Maur has retained her almost schoolgirl freshness and footage of her on tour with the band reveals that she brought a little light into a very dark situation. She and Schemel became very close and the footage of them talking or joking about on tour is touching and sweet.

Schemel’s lesbianism is discussed and the viewer gets a clear sense of her frustration, both in terms of having grown up in a quiet town where there was little chance of having a smooth coming out process and in being labelled with her sexuality: sentiments echoed by Faith No More’s Roddy Bottum.

Undermined and under pressure, Schemel left Hole during the recording of Celebrity Skin. She features in the album’s artwork but did not play on the album. She disappeared. Not even her mother knew where she was

The point at which things really unravelled for Schemel was during the recording of Hole’s third album, the aptly titled Celebrity Skin. The album was released in 1998, by which point Hole had begun to be defined more and more by Courtney Love. To be fair to Love, this wasn’t necessarily her fault. Her acting career had taken off by 1998 and she was always a particularly flamboyant frontwoman. But Celebrity Skin marks the point where Hole became The Courtney Love Experience. 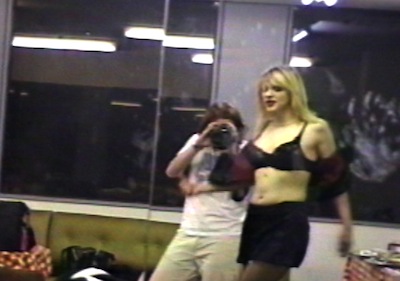 Many of those interviewed recognise this as an industry trend that could be witnessed with earlier female dominated or all-female bands. They point to the way that a spotlight was used to single out both Susanna Hoffs from the rest of The Bangles and Belinda Carlisle from the rest of the Go-Go’s and they see what happened to Love and to Hole in the late ’90s as being part of this continuum.

Another factor was the producer of Celebrity Skin, Michael Beinhorn, who appears to have been determined, according to at least one interviewee, to evict Schemel from the recording session from the start. Undermined and under pressure, not to mention exhausted, Schemel left Hole during the recording of the album. She features in the album’s artwork but did not play on the album or appear in any of the videos made to promote it, nor did she tour. She disappeared. Not even her mother knew where she was.

Time in the wilderness, which culminated in life as a homeless, penniless crack addict, marked the bleakest period of her life. But Schemel proved to be a survivor, clawing her way back to sobriety and happiness. The film ends with her sober, happy and married with a child. Her legacy lives on through the US Rock’n’Roll Camps for Girls where she teaches.

This is an uncompromising film about a likeable and funny woman in one of the most exciting bands of the 1990s. It is fitting that this should be Schemel’s story: the viewer can see that she is part of a lineage of female rock drummers, beginning with Honey Lantree in The Honeycombs, through Alice De Buhr from Fanny, through Gina Schock of the Go-Go’s and Debbi Peterson from The Bangles. Hole was a part of ’90s rock history, not a mere addendum to Nirvana.

Cazz Blase wanted her parents to buy her a drum kit, but didn’t get one. In retrospect, she’s more disappointed about not getting the punch bag and boxing gloves, but did appreciate the Scalextric