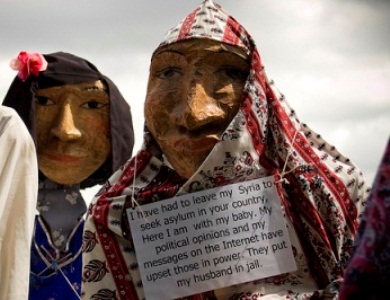 Asylum seeker mother faces eviction after speaking out against G4S

The following is a press release from South Yorkshire Migration and Asylum Action Group.

UPDATE 5.30pm: Cha is no longer going to be evicted tomorrow – she only found this out when a journalist contacted the UKBA press office. Her asylum appeal is to be heard next week.

Cha Matty, an asylum seeker mother, and whistleblower on the G4S Stockton mother and baby hostel, faces eviction and punishment for speaking out for her rights and those of her one-year-old .

The UK Borders Agency have ended financial and housing support and G4S and their agent Jomast Developments are evicting mother and baby tomorrow, Wednesday 23rd January.

Cha gave damning evidence about the Stockton hostel to a panel of MPs convened by the Childrens Society and Sarah Teather MP in November. She spoke to the Guardian and a conference of Women Refugees in Bradford. Her reward is victimisation by the UK Borders Agency and G4S. Cha knows something about housing and the needs of children. She worked in housing and has a first class UK social science degree but claimed asylum because she was unable to return safely to her home country Zimbabwe, and the terror regime of Robert Mugabe.

The UK Borders Agency intimidate any asylum seekers who speak out and challenge their regime which is intended to make the lives of asylum seekers and their children so difficult that it will put off any more intending asylum seekers coming here. Cha and her child are in the UK legally – simply seeking safety from the Mugabe regime.

G4S seem happy to back up this policy, and they have done it before. In June last year an African asylum seeker and her ill baby were dumped in a dangerous flat in Doncaster by the housing partner of G4S, United Property Management (UPM). The UK Borders Agency inspectors condemned the flat but because the woman involved campaigners and the press in her plight she was left in the flat for six dangerous weeks until Doncaster Council forced G4S to move her.

Cha is determined to fight for her human rights and those of her child. She hopes Stockton council will shame the UK Borders Agency and G4S by rescuing her from the streets, giving them a roof over their heads. Cha is determined to fight to get back the tiny financial support (£78 per week) she has been receiving for herself and her one-year-old for food, nappies and essential baby supplies.

The photo was taken at Amnesty International’s International Refugee Day Rally in London by lewishamdreamer, and is shared under a Creative Commons licence. It shows two life size papier-maché figures. One appear to be a woman of East Asian descent with a flower in her black her. The other wears a headscarf and has a sign hanging around her neck that reads “I have had to leave Syria to seek asylum in your country. Here I am with my baby. My political opinions and my messages on the Internet have upset those in power. They put my husband in jail.”