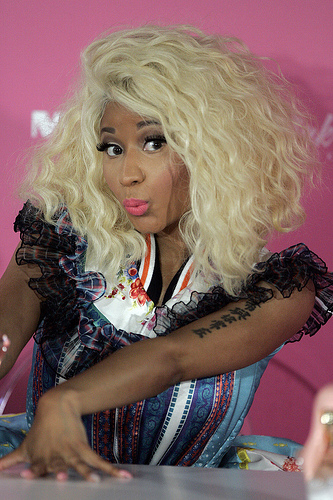 Bisexual women are the new sexy in pop music

Is recent frankness about bisexuality among female pop stars indicative of liberation of women and LGBT people or merely an extension of sexualisation of the industry, asks Lawrence Allen

Katy Perry rising to fame by defiantly shouting ‘I kissed a girl and I liked it!’ Lady Gaga claiming that ‘Poker Face’ is about secretly fantasising about having sex with a girl whilst having sex with her boyfriend. Rihanna in the music video for ‘Te Amo’ seductively caressing a female dancer on a bed, both wearing lingerie. Nicki Minaj claiming that she loves hanging out at female strip clubs in ‘I Luv Dem Strippers’. Madonna kissing her two stage brides, Britney Spears and Christina Aguilera, at the 2003 MTV Video Music Awards. All these are images from the past 10 years of American pop music. Some are iconic moments, others comparatively pedestrian; some are controversial, some not so much. All, however, feature undeniably successful women.

Imagine now, Justin Bieber, for example, having a hit with a song about how much he likes making out with his male friends on a night out or thinking about them whilst in bed with his girlfriend Selena Gomez. Imagine him in a music video, caressing a male backing dancer’s boxers, or surrounded by pole dancing male strippers. Most would find these scenarios unlikely.

In May 2012, a couple of weeks before the release of his debut album, Frank Ocean attracted media attention by confessing that his first love was a man. In this modern era, when a US president has openly endorsed gay marriage, coming out is no longer a career killer. In fact, the move may have affected Ocean’s album sales positively rather than negatively. Still, there was something that seemed unique about the incident. Coming from a background of hip-hop, with its Afro-Caribbean influences and no-homo culture, the move appeared all the more courageous, and many critics and supporters praised the bravery of this move. But why was it so brave for this male R&B star to come out, when New York Times’ most influential female rapper of all time, Nicki Minaj, reportedly pretended to be bisexual to get attention? Why is it so unusual for Ocean to come out as bisexual when almost every major female pop star of the past ten years has flaunted the idea?

The unusual braveness of Ocean’s revelation, that he loved a man, shows that acceptance of men challenging their assigned role is moving at a different speed

Bisexual female pop stars are popular for two reasons. First of all, a lot of women like them, for they appear to be liberated, uncompromising and transgressive. Secondly, men like bisexual women because, well, they’re considered to be hot. Is the lady love in the charts little more than glorified girl-on-girl action? Do female pop stars liberate, titillate or both? Is the plethora of female bisexual imagery in pop music a victory or a loss for feminists, and for LGBT people?

There is something aspirational and inspirational about the modern pop star. The celebrity singer is not just someone young people want to listen to; it’s someone they want to be. As such, recent years have seen the charts fill up with strong female stars, asserting their strength, dominance and independence, inspiring girls to believe that they can run the world. Being able to make out with hot girls is the ultimate extension of girls being able to equal guys in everything they do; nothing says “I don’t need a man” like getting your kicks with a girlfriend.

To experiment in same-sex relationships is to defy one’s anciently appointed gender role. If one opposes traditional gender roles, the stereotypically weak, passive female becomes strong and active, but the stereotypically strong, dominant male becomes weak. When Jessie J says “I’m bi – so what?” she seems strong. But when Ocean says he loved a man he seems incredibly vulnerable. It’s easy to see why bisexual women are cooler than bisexual men: most women don’t want to look weak, but neither do most men.

The ubiquity in pop culture of girls behaving like boys, when contrasted with the corresponding lack of boys behaving like girls, highlights the enduring misogyny 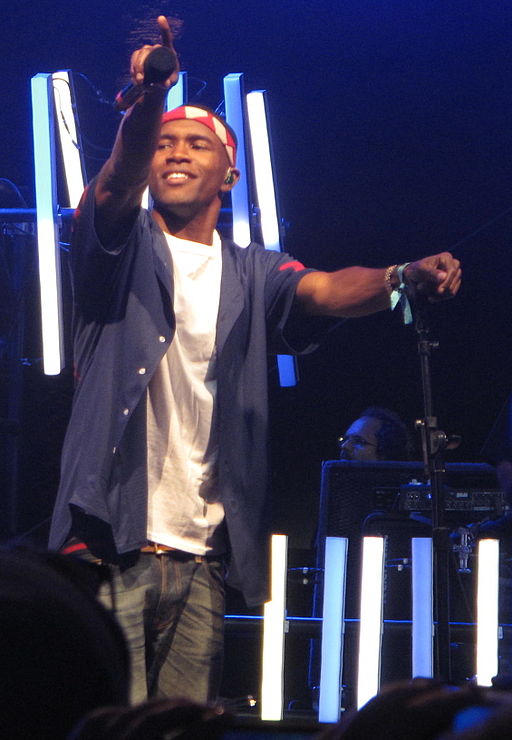 So while men still want their male role models to be men, it seems that young girls now look for female role models who also exhibit characteristics that our culture has labelled as masculine. Jessie J, for example, shot to fame on the back of her debut single ‘Do It Like A Dude’, boasting such loaded lines as “grab my crotch, wear my hat low”, “throw me a beer, no pretty drinks, I’m a guy out here” and “my bitches on my dick like this”. Now I’m all for women rejecting the idea that they should behave in a certain way and am glad to see this rejection recurring in pop culture. Furthermore, I am thrilled to see openly bisexual Jessie as a visible role model for gay, bisexual and, indeed, heterosexual girls. However, the unusual braveness of Ocean’s revelation, that he could admit doing something as supposedly feminine as loving another man, shows that acceptance of men challenging their assigned role is moving at a different speed. As one of pop’s experts in exploiting sexual controversy, Madonna, states in her 2001 single ‘What It Feels Like For A Girl’:

Girls can wear jeans and cut their hair short,

Wear shirts and boots, ’cause it’s okay to be a boy.

But for a boy to look like a girl is degrading,

‘Cause you think that being a girl is degrading.

A defiant statement of neo-feminist liberty, the ubiquity in pop culture of girls behaving like boys, when contrasted with the corresponding lack of boys behaving like girls, highlights an enduring sense of misogyny. Boys are still better than girls. But girls now have the option to be like a boy if they want to be better. While women may no longer have to behave in a feminine way, the idea of masculinity and femininity being intrinsically equal is still only that – an idea.

However, despite being able to down beers with men, modern female pop stars still simultaneously exude feminine beauty. They can be masculine, they can be feminine: they can be everything. As Beyoncé proclaims in ‘Run The World (Girls)’, they’re “Strong enough to bear the children / Then get back to business”, and this shouting, marching, feminist track comes from an album predominantly filled with slushy ballads that ooze feminine sexuality. The trend of bisexuality in female pop performances runs parallel to a trend of duality of personality. The template for the modern female pop star combines a masculine dominance with an old fashioned feminine sex appeal, creating a rather unstoppable force.

But is it only by having this exact mix that these strong women are so readily accepted by both men and women? That is to say, would crotch-grabbing Jessie J have been so successful if she were a full on Chaz Bono? Despite portraying behaviour and personality traits formerly only accepted as masculine, visually, the women in the charts are very much women. Moreover, they are very conventionally attractive and beautiful women and are often seen wearing a lot less clothes than their male counterparts. Of course, every woman should have the right to look as she likes, but generally, female pop stars have to be necessarily sexy. Just look at the abuse Nicola Roberts received for being perceived as ‘the ugly one’ in Girls Aloud, and Jesy Nelson for being ‘the fat one’ in Little Mix. Though perhaps sexually liberated in many ways, social pressure on girls to be stereotypically sexually appealing is as strong as ever.

Some things never change, and one of them is that sex sells. For a record company, not only is it important for girls to want to be like their beautiful female artists, but also for men to want to be with them. This has always been the case, but recently pop has been getting so sexualised, people have started to complain, and even the Prime Minister has weighed in.

An emphasis on looks and youth in the pop industry is by no means a gendered phenomenon – Rik Waller can arguably sing, but he wouldn’t have made the cut for The Wanted. But when children see Ne-Yo performing in a sharp jacket and bowler hat while Katy Perry wears a creamcake bikini, the message is clear. Furthermore, complaints about pop music videos and live performances becoming too X-rated (for example, Rihanna and Christina Aguilera’s performances at the 2010 X factor final) always seem to surround women’s bodies.

Being bisexual is edgy and cool, but lesbian is far too out there to be relatable to the average straight woman

Perhaps it is this nudge-nudge wink-wink superficiality that allows this apparent queerness to have become so mainstream. For despite straight female celebrities apparently falling over each other to prove they’re the most sexually liberal, as far as dedicated homosexuals are concerned, women are in fact less visible than men in the media: for every Claire Balding on our screens, there’s an Alan Carr, a Paul O’Grady, a Graham Norton and a Stephen Fry. Clearly, society is more willing to accept the woman who mixes a masculine strength with a feminine charm than the straight up butch.

However, normalising bisexual experimentation in women is not the same as normalising homosexuality. It’s understandable that a male dominated society might be tempted to harbour prejudice against women who have absolutely no interest in men. After all, what use are they? It has been alleged that Jessie J is in fact 100 per cent gay, though she has strongly refuted these claims. Perhaps the pressure to appear bisexual is then applied to both straight and gay female pop stars. Being bisexual is edgy and cool, but lesbian is far too out there to be relatable to the average straight woman. Furthermore, straight men may enjoy the idea of women having sex with women, but only if they believe that they might also have sex with them.

If one of the roots of the phenomenon of female bisexuality in pop is that women are being encouraged to portray an image of bisexuality to appear sexy (to men), rather than a victory for feminism or the queer movement, then the phenomenon is in fact a twisted product of misogynist heteronormativity.

Lawrence Allen is a 21 year old writer, musician and drag queen from Stockport. In his spare time he enjoys pop music, being fierce, and swan diving off bar stools to Cheryl Cole songs