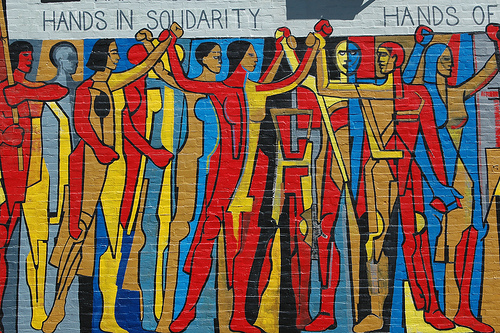 Suzanne Moore has had a rather dishonest article published in the Guardian’s Comment is Free section today. In it, she claims she was attacked on Twitter this week because she used the throwaway line that the desired body for women is that of “a Brazilian transsexual” in a piece she wrote for the New Statesman about women’s anger at the cuts. She says she made things worse by stating that she doesn’t like the word “transphobia”.

While the criticism of her phrase was certainly warranted, what I and many people found most shocking – and transphobic – were her subsequent tweets:

I dont prioritise this fucking lopping bits of your body over all else that is happening to women Intersectional enough for you?

People can just fuck off really. Cut their dicks off and be more feminist than me. Good for them.

(Embedding isn’t working for me, but you can see the tweets here, courtesy of stavvers.)

This language in reference to trans women is truly vile. It’s horribly dismissive of trans women’s identities and their medical needs (although not all trans women have surgery), is completely disrespectful and implies that they are nothing more than mutilated men. It is these kinds of attitudes – yes, transphobic attitudes – that contribute to the discrimination and violence suffered by trans women on a horrific scale.

Yet the aforementioned tweets are not referenced in Moore’s article. Instead, she claims that she doesn’t care “if you were born a woman or became one”, and that what she does care about is “something that is deeply old-fashioned: solidarity”, with reference to the fact that:

Everything I wanted for my daughters and yours is being denied them: housing, free education, employment. It makes me nauseous to see feckless Etonians kick single parents in the face. It makes me ill that meritocracy is the ruling-class myth, that policy is not about economics but rancid ideology.

In the face of this, being accused of hating transgender people seems a little “irrelevant”, she says. The implication seems to be that trans people and their allies who got pissed off at Moore’s comments should ignore what she said because we need to work in solidarity with her and all other women to overthrow the Tories.

Yet solidarity does not mean creating a false dichotomy between caring about the oppression of one subsection of an already oppressed social group (trans women) and caring about the whole of that group (women in general). It’s possible to care both about transphobia (in this case in the form of language) and about the issues that Moore raises.

In fact, it’s essential that we care about both.

Moore professes to a dislike of the term “intersectionality”, a concept which demands that we take into account the multiple oppressions that women suffer (racism, disablism, homophobia, transphobia etc. in addition to sexism), rather than address women as one homogenous group that usually ends up with the assumed characteristics of its most privileged members (white, heterosexual, non-disabled, middle class, cis). Yet this intersectional approach is the only way in which we can ensure that all women benefit from the action we take to end the discrimination we suffer: it is the very basis of solidarity.

If we don’t make an effort to understand the different forms of oppression and discrimination suffered by other women, we can end up perpetuating them. This is evidenced in Moore’s article, where she seems to blame trans people for the apparent loss of the “gender fluidity” of the 1970s, because some of them “appeared to reinforce every gender stereotype going”. She ignores the fact (repeatedly highlighted in this week’s #TransDocFail twitter trend) that the medical establishment requires trans people to conform to gender stereotypes in order to access medical support. She also ignores the fact that trans people are at risk of violence and discrimination if they are not perceived as their self-identified gender. Instead, she adds to trans people’s woes by scapegoating them for the very problems they have to face on a daily basis.

So, yes, let’s get angry about what the government is doing to women, and let’s come together in solidarity to create a better society, but let’s do so in a way that acknowledges, addresses and is respectful of all the problems we face as women – including transphobia.

The image shows the “Hands in Solidarity, Hands of Freedom” mural on the side of the United Electrical Workers trade union building in Chicago, Illinois. A variety of people painted in blues, gold, yellow, black and red stand together, holding each others’ fists aloft, beneath a banner with the title of the mural. Photo by Atelier Teee, shared under a Creative Commons licence.