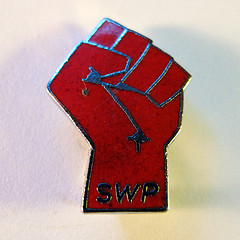 It has come to light this week that the internal Disputes Committee within the Socialist Workers Party (SWP) held a hearing to address a rape case involving a young female party member and a senior male member. The accused was ruled not to have raped the complainant. The Disputes Committee reported back to the party conference on Saturday 5 January, where the issue was discussed. A transcript of this discussion has been leaked and published online.

That it was deemed appropriate to deal with such a serious issue outside of the criminal justice system is in my view bad enough, particularly considering that the worst punishment the accused could apparently have faced if found guilty of rape was his expulsion from the party. But the details of the Disputes Committee hearing, as evidenced by the transcript, make matters even worse.

To summarise, the Disputes Committee members all knew and/or were friends with the accused and five out of eight of them were serving or previous members of the Central Committee, of which the accused was apparently also a part. None of them knew the young woman (referred to as “W”). W is reportedly “incredibly traumatised by the hearing”. According to a party member who spoke up for her at the conference:

She was questioned about why she went for a drink with him, her witnesses were repeatedly asked whether she’d been in a relationship with him […] she was asked about relationships with other comrades including sexual relationships.

She felt she was being interrogated and felt they were trying to catch her out in order to make her out to be a liar. She did not accept the line of questioning, saying ‘they think I’m a slut who asked for it’. […] she feels she’s been treated as this non-person.

The transcript also indicates that W “was expected to respond immediately to the evidence that [the accused] was able to bring – she never got to see it in advance. He had her statement for weeks before she appeared in front of the panel.”

Another woman has also come forward with accusations against the man. She says she has been removed from her party job and told her presence would “disrupt the harmony of the office”.

All this has lead to former Socialist Worker journalist Tom Walker resigning from the party. He explains his decision and raises very serious concerns here, including the following:

It is stated that the accuser did not want to go to the police, as is her absolute right if that was truly her decision. However, knowing the culture of the SWP, I doubt that was a decision she made entirely free from pressure.

Do not underestimate the pressure the SWP can bring to bear on members by telling them to do or not do things for the ultimate cause of the socialist society the party’s members are all fighting for. Against the prospect of the liberation of the whole of humanity, they will attempt to make even the most serious issue seem less important than the party’s survival.

Indeed, the Disputes Committee members repeatedly refer to protecting the party’s reputation when discussing the case.

I have chosen to highlight this firstly because I want to express my solidarity with the women who were brave enough to speak up about the alleged abuse. They have been treated appallingly and my heart goes out to them.

Secondly, I think it’s important that this information is shared widely, because both party members and potential party members have a right to know how the SWP leadership treat women who come forward and say they have suffered abuse. I can only imagine how those already within the party may be feeling following all this; it’s clear that many members do not agree with the way the case was dealt with.

Laurie Penny has written more this case over at New Statesman, situating it in the wider context of how sexual violence is dealt with by the Left.

Photo of an SWP badge (a red fist with the letters SWP) by dannybirchall, shared under a Creative Commons licence.