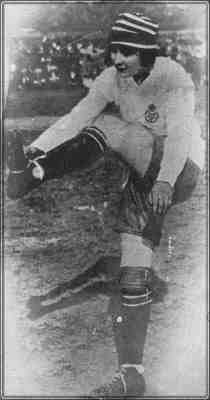 As it’s International Women’s Day, salute Lily Parr – the woman with a kick like a mule, a chain-smoking habit, and as many career goals as Pele…

It’s not unusual to talk to a woman who’s had an experience where she’s encountered a man who doesn’t believe she can do her job as well as he does his. It’s a little more out of the ordinary to find the chauvinist writhing on the ground nursing a broken limb as evidence of the woman’s competence.

Still, legend has it that’s what happened when Lily Parr came up against a man who was unconvinced that women could play football. She didn’t argue; she didn’t put on an exhibition of ball skills; she told him to go in goal so she could fire a shot at him and demonstrate that she was indeed a powerful player. Seconds later, her shot had taken him into the back of the net along with the ball – and broken his arm with its sheer force.

Lily Parr was born on Merseyside in 1905, the fourth child of seven born to George and Sarah. As a little girl, she enjoyed kickabouts with her brothers, and before long she was recruited to the St Helens Ladies team. Aged 14, she signed for the famous Dick, Kerr’s Ladies, a side made up of workers from the wartime munitions factory in Preston, set up to raise money for charity.

In 1920, the local newspaper wrote about Parr: “There is probably no greater football prodigy in the whole country. Not only has she speed and excellent ball control, but her admirable physique enables her to brush off challenges from defenders who tackle her. She amazes the crowd where ever she goes by the way she swings the ball clean across the goalmouth to the opposite wing.”

In that first season, she scored 43 goals from the wing, which means that goalscoring wasn’t her primary job – a sign of what was to come over her long career, in which she tallied over 1,000 goals altogether. As a comparison, the great Brazilian Pele, who was a striker and picked for his goalscoring prowess, scored 1280 goals, if you include every single game he ever played in.

Parr’s exact career statistics are difficult to get hold of, due to the lack of records kept at the time. Her career started off so promisingly – women’s football was big news during World War One, while the able-bodied young men were away fighting, and Parr and her team-mates became huge stars, drawing crowds of thousands to every game.

It was not to last. In 1921, with men’s football starting up again, the Football Association banned women from playing on their member grounds, supposedly because of a fear that sport might be damaging to women’s health, but more likely because the interest in their performances were embarrassing the football establishment.

Lily and her team-mates refused to let the FA’s narrowmindedness ruin their sport, and continued to play, including tours of France, Belgium, and the USA. The American tour was a last-minute arrangement, and the Dick, Kerr’s Ladies were expecting to be lining up against other women’s teams. Not a bit of it. They were up against men, and not-too-shabby men, at that – men’s teams from the country’s national professional league, including the champions. They acquitted themselves well: on a nine-match tour, they won three and drew three.

Lydia Ackers, who played for many years with Parr, said: “I have never seen any woman, nor many a man, kick a ball like she could. Everybody was amazed when they saw her power, you would never believe it.”

Their team-mate Joan Whalley agreed: “She had a kick like a mule. She was the only person I knew who could lift a dead ball, the old heavy leather ball, from the left wing over to me on the right and nearly knock me out with the force of the shot…. When she took a left corner kick, it came over like a bullet, and if you ever hit one of those with your head… I only ever did it once and the laces on the ball left their impression on my forehead and cut it open.”

Just in case you think they’re biased because they were her friends, the men playing at the time knew full well how good Parr was. Scottish international Bobby Walker reckoned that she was the “best natural timer of a football I have ever seen.”

After she finished her service at Dick, Kerr’s, Parr trained as a nurse and went to work at the Whittingham psychiatric hospital, where she stayed until her retirement. That didn’t stop her playing for the team, though; by this time they were renamed the Preston Ladies, and Parr remained the lynchpin of the side until her last game in 1950. As part of her playing agreement with the club, she insisted on being provided with Woodbine cigarettes. A lifelong heavy smoker, she was diagnosed with breast cancer, and died in 1978 – seven years after the FA decided that it might be a good idea to let women play football on proper pitches again, but too late for Lily Parr to take her rightful place on the turf.

Lily Parr is a legend in football terms, which is why she was the only woman inducted into the National Football Museum’s Hall of Fame when it opened in 2002. But she’s also a key figure in British lesbian history, living openly with her partner Mary, who she met while working at the hospital.

Sir Tom Finney, who as a contemporary of Lily Parr gave many years of service to Preston and England, supported women’s football throughout his career, and has since been vocal about his delight in the number of females pulling their boots on in recent years.

“It is fast becoming a world sport,” he has said. “Perhaps this is due in some way to the determination of Dick, Kerr’s Ladies, who played on after the FA ban and helped lay the foundations for today’s game.”

Image is a black and white picture of Lily Parr, from the scrapbook of Alice Woods, used with permission of her daughter Lynn Fabian.

A version of this article originally appeared in the now-defunct Scarlet magazine.

Edited to add: The facts which informed this blog post originally came from the research of Gail Newsham and was published in her book, In a League of Their Own! More information about Gail’s work can be found here.