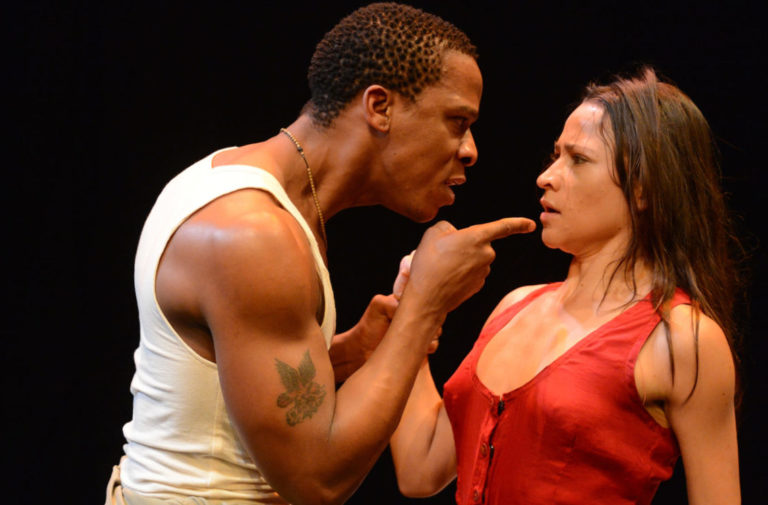 Where miracles happen and leave things exactly the same

After inspiring a wave of good reviews when it was staged at the Edinburgh Festival, the noise surrounding Mies Julie has only increased with its transfer to London and the Riverside Studios. The excitement surrounding the production is with good reason. Writer and director Yael Farber has taken August Strinberg’s notorious 1888 play Miss Julie out of its aristocratic Swedish setting and plunged it into the dust and desert of South Africa. The transformation is completely engulfing and quickly explosive.

Mies Julie is opened by an ancestral spirit who wades through the audience, hypnotically humming a tribal song. Played by Thandiwe Nofirst Lungisa, she directs your focus slowly on to the stage, where there is a farmstead kitchen. Allusions to the suffocating heat that will inevitably spark rain and a storm powerfully enhance a sense of the suppressive attitudes that envelop the characters and the unfolding drama.

The tense atmosphere is masterfully evoked even before the stage is populated by actors. The lighting and the constant rotation of an old white fan hanging above the stage make the balmy heat tangible. The use of dance perfectly expresses the sexual tension and aggression taut in the performers’ bodies. It seizes your attention until the breaking of that inevitable storm, in which the power struggles of South Africa are cut open.

John, the master’s black servant, is conflicted between an internalised sense of obedience and a bristling urge to rebel against it

Set on Freedom Day in the contemporary Karoo, the class and gender power struggles that mark Strindberg’s original work are heightened by the racial prejudice and cruel history that prevail in this conservative region. Offstage, the black workers on this white Afrikaaner-owned farm are marking the celebrations with dancing, but there are violent tensions and unrest bubbling below the surface. The master has cut off their electricity and water, to try force black “trespassers” off the land. The family’s dog is pregnant, but she has been impregnated by the servant’s dog, so the bitch must be forced to abort. Caught in this messy state of affairs is John (Bongile Mantsai), the master’s black servant, conflicted between an internalised sense of obedience and a bristling urge to rebel against it. Meanwhile, his mother – who replaces the character of John’s wife in the original play – seems to embrace the status quo. Having scrubbed the floors of that kitchen all her life, she has assimilated the values of difference and deference. Alongside the ancestral spirit, she gives the play the sense of South African history, making the power struggles that characterise this play seem desolately unfixable. Then there is Julie. Julie (Hilda Cronje) is the white Afrikaans daughter of the master, who bristles with lust and frustration to match John’s barely contained disquiet.

Far from an empty modernisation, this version stands strongly on its own legs although Farber follows the essential narrative of the play. Julie flirts with and provokes John. Playing with the power her race and class lends her, she gives him commands: “Are you free John? Then kiss my foot.” The sexual and violent tensions escalate between them, building to a moment of passionate sex.

But there is no release from the drama. With the breaking of society’s precariously balanced rules, a storm of emotion, violence and despair is unleashed. John’s anger spills out into violence against Julie. There is a reversal of power as he finds a source of strength and cruelty that he has always been denied, and Julie falls to her knees begging for him to renew his sentiments of love.

However, the audience’s reaction is of overwhelming despair, not the blame that Strindberg levels. He attributed Julie’s behaviour to her “shockingly feminist” mother, who has bred in Julie a simultaneous disgust for and fascination with men. The collapse of her engagement is explained by her attempts to train her fiancé. In that context her grovelling is almost a return to the natural order. Predictably Farber loses the misogynistic overtones for which Strindberg was infamous. In its place, though, is something as remarkable.

The ultimate power of this production is that it unfolds the various discourses of power in which so many societies are wrapped up and lays bare, with complete honesty, the raw reality of human existence. The sexual scenes in this version are explicit. But unlike in the 1888 version, where the very suggestion of sex was scandalous, there isn’t anything pornographic, uncomfortable or coyly refrained about it. It just feels honest.

What Mies Julie offers is a starkly clear vision of human life struggling in a perverted system, in which gender, race and class dictate power

When Julie in desperation threatens to ‘cry rape’, it doesn’t feel like a reliance on a misogynistic stereotype. Rather it is a moment of heart-breaking clarity, as she realises that for all her white skin and status, she is still a young woman reliant on her father, with no way to escape the reaction that she will face in a relationship with John. Quickly, her control of her body becomes her only weapon. Even when John threatens Julie with sexual violence, you don’t blame him but the whole damnable situation. What Mies Julie offers is a starkly clear vision of human life struggling in a perverted system, in which gender, race and class dictate power.

That vision is difficult to stomach, most of all because the despair seems unending. In the context of South Africa, the centuries old land feuds continue. “My ancestors live under these stones,” John declares. “And mine are buried under the trees out there,” Julie rebukes.

“Welcome to South Africa,” John concludes at one point, “Where miracles happen and leave things exactly the same.” The play shows battles for power are cyclical. As it draws to a close, John picks up the shoes that he has been so obsessively polishing throughout the play. He tugs on those “white man’s shoes”. He stands tall as a figure of violence and strength. “I just have to be like him,” he says, his gun held high.

As difficult as it is to watch, I have a sense of gratitude for having seen Mies Julie. Through the fictional events of one night, Farber and a small cast of talented actors bring a raging storm of reality to aspects of society so often obscured by a haze of history and normality.

Mies Julie is showing at the Riverside Studios until 19 May.

Photos are by William Burdett-Coutts and are used with permission.

Charlotte is a history graduate from the University of York who has spent the past year beginning to forge a career in the media. In the next week she will be leaving for Palestine to volunteer with the Women’s Centre for Legal Aid and Counselling. She hopes to expand her understanding of women’s lives internationally and to experience a situation at the heart of movements in the Middle East.