“What does a woman know, anyway?”: sexism in debating 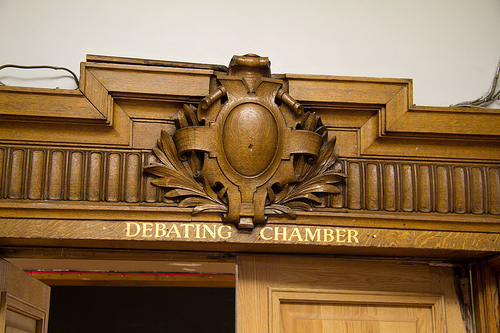 In the past three days I have received hundreds of emails, from the Philippines, from South Africa, from America and the UK, saying: “I am a young, intelligent woman who debates, and I have been a victim of misogyny.”

I have been debating since I was 14. At school it was a hobby, good for the CV; at university it allowed me to travel the world; and on Saturday it thrust me into one of the most unpleasant incidents of my life. A friend and I opened the final of the Glasgow University Union (GUU) Ancients debating competition. Like the other six individuals in that final, we had won enough of five rounds of debates to reach it. Unlike them, we were booed, heckled with “Shame, woman” and exposed to sexual comments about our appearance. This was unrelated to the content of our speeches. None of the others faced this. The difference between us? We are female and they are male.

During the debate, some male students, including former GUU committee members and an ex-president, asked “What qualifications does a woman possibly have to be here?” “What does a woman know, anyway?” Afterward, one shouted “Get that woman out of my chamber!” as my debating partner passed.

A female student who objected was told not to be a “frigid bitch”. Another challenged perpetrators afterward: tournament organisers and GUU committee members begged her not to “cause trouble”. Confronting one heckler and the committee, I was told that this behaviour was “to be expected”, “par for the course”. I asked whether they would accept similar treatment of racial minority speakers. “They would be booed too, but we don’t have them here.” The committee accepted we were booed because we were women, but refused to take action.

The GUU has been accused of misogyny before. Some members hold an annual celebratory dinner in honour of men who voted against admitting women in the 1980s. At a Union pub quiz I heard the question, “How many men voted against letting women into the GUU?” met with a torrent of applause from male students.

There are lovely people at GUU. Some individuals apologised personally. But students there told us that the men concerned often shouted “whore” and “slut” at female students. A former committee member stated that she had “battered wife syndrome”, reaching the top by accepting and ignoring misogyny. One said, “Things will never change here, they are too powerful.”

I don’t mind if crowds heckle or express disapproval of my arguments. But I refuse to accept that by virtue of being a woman, I should be abused in a way men are not. Women should not have to accept being overtly sexualised or targeted as “par for the course” in a university which is supposed to represent learning and equality.

This incident is not isolated. We aren’t complaining for fun. Many from Glasgow University report abandoning debating as a fresher because of misogyny. One heard committee members singing about rape. Debaters across the world share similar stories. One was told to wear a shorter skirt to win debates; others were told that male speakers sound “persuasive”, but women’s voices sound hysterical. I myself have been told to defer to my male partner since “men are more convincing”.

I created an online survey for debaters worldwide to anonymously report misogyny. Within six hours, we had over 150 reports of women facing sexual harassment, derogatory comments and abuse. We will compile a report with ideas for practical change within debating to combat misogyny. To be clear, debating is usually friendly and inclusive; many world-class university speakers are women. But some unions still face institutional sexism, where women must accept sexism to stay involved and gender-based abuse is normalised.

The national media has invented details without speaking to us. One daily tabloid claimed we were reduced to tears in the chamber, another that we were upset because the boys called us ugly. None of this is accurate. Our attempt to create change has morphed into a story about two stereotypically weak women who cried when boys were mean to them. Commenters attacked us as “wrapped in cotton wool” and “clearly not good enough debaters to deal with it”. But debating shouldn’t involve shouting over sexist abuse from men who believe your gender makes you an inherently inferior speaker. It’s not an equal art if men have a free platform to speak and are judged on argument, while women are sexualised, abused and judged on gender.

Responses from social media shocked me: my Facebook profile was shared by male GUU members, while university social websites placed pictures of me, taken from the internet, in their “hotties” section.

Several Glasgow student societies have disaffiliated from the GUU. The Cambridge Union has promised not to send debaters there until sexism is dealt with. A petition to hold the members to account was set up by a Glasgow student, receiving over 3,000 signatures. In response, the GUU has promised to look into the incident and work on its pervasive culture of misogyny. I hope they do. They owe it to many bright young women who contacted me to say they left debating because of treatment they faced there. Above all, I hope that the hobby I enjoy learns that GUU is not isolated, but that latent misogyny which says that the male rhetorician is inherently more persuasive, or that girls must only win debates because of who they have sex with, must be tackled.

Women debate and deal with hecklers just as well as men. But we shouldn’t have to ignore sexism to get ahead. We shouldn’t be booed for our gender or see ourselves turned into crying damsels when we speak out. Please argue with me; leave comments challenging me; but do not refuse to listen simply because I am a woman.

Image shows a wooden carving over the door of a debating chamber, with the words “DEBATING CHAMBER”. Shared courtesy of Gavin Reynolds under a Creative Commons licence.