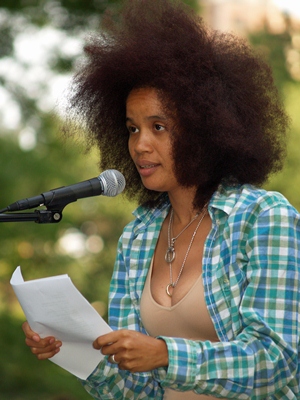 “Lesbian” is not a dirty word

In many ways, being a gay woman that is also a feminist feels like being the punchline to a bad joke. I am one of those hairy feminists. I am a lesbian: the sweater vest, sensible shoe, cat-loving kind; not the edgy-leather-and-studs-cool-haircut kind. You know, the one you trip over yourself to emphasise you’re not when the subject of your politics comes up, out of fear people think you’ve become a lavender menace. It’s sad that an ideology that concerns itself with the freedom of women from patriarchy is willing to engage in lesbophobia unashamedly.

What even is lesbophobia? It’s a term some may never have heard of before reading this. Lesbophobia is the misogyny and homophobia leveled at lesbians. Cynthia Petersen, a professor at the University of Ottowa, defines it as ‘the fear of women loving other women and the fear of men not loving them’. (Don’t worry, there won’t be a test at the end.)

To a certain extent I agree with Petersen’s definition. Any woman that has ever been catcalled can attest to the vitriol spouted after a misogynist gets rejected; now imagine you’re in a park or bar after a man has expressed an interest. You’ve turned him down because ‘Sorry, I’m a lesbian’. It’s almost poetic the many ways he’ll often find to tell you that not only are you a filthy lesbian, using every gendered homosexual slur, but that really all you need is sex with him to help you with your daddy issues. He may even go as far as to insult your mental health because homosexuality implies imbalance, which is doubly triggering if you do suffer from mental illness.

To be ashamed of the Lesbian contribution to feminism is to erase an important part of women’s history. It does a great disservice to the many women who lived their lives to further the cause of women’s liberation; women like Audre Lorde and Staceyann Chin. To be ashamed of Lesbians in feminism also means that we are forgotten when it comes to discourse on issues like domestic violence and even sex positivity. After all, how can you begin to have a positive attitude toward sex when even your sisters make you feel ashamed of your orientation?

So much feminist literature desexualises Lesbians to the point where ‘lesbian’ often becomes synonymous with sisterhood and companionship, which is just as damaging as the hyper sexualisation of Lesbians in mainstream media. We are forgotten when it comes to examining rape culture – not only within the Lesbian community – but having frank conversations about corrective rape, which doesn’t just occur in countries like South Africa or Uganda, as much feminist media leads many to believe. Lesbians suffer from internalized misogyny just like anyone else; however women’s spaces never feel safe enough to talk about it. Many believe Lesbianism somehow makes one immune from it, or talking about it confirms the predatory lesbian trope. Queer spaces often have little time for us either; when we come together in solidarity, well, we’re just elitists who only care for our own agenda.

The recent American gay marriage court decisions highlighted how out of touch Straight and even Queer identifying feminists are with Lesbians. I saw so many articles and blog posts telling me how I should feel about it. Some were incensed that apparently we didn’t care enough, others believed that we all cared too much, and hardly ever did I see someone acknowledging that maybe, possibly, we weren’t one monolithic group of one mind and opinion. Even more baffling was that many I talked to didn’t seem to make the connection that some Lesbians, like myself, are Women of Colour. It really highlighted the need for truly intersectional women’s theory, and how necessary an open conversation about lesbian issues is. Hopefully this is a meaningful start.

My intent isn’t to shame my heterosexual sisters; lesbianism isn’t some sort of god-tier feminism that sits at a lofty height. I’m not expecting that after reading this you’ll be free from prejudice. However, if we are truly going to strive for inclusive intersectional feminism, the answer shouldn’t be a bashful ‘oh no I’m not one of those hairy lesbians’ the next time someone asks if you are a ‘manhating dyke’, but rather a defiant ‘so what if I was? Would that make me less entitled to have an opinion?’

We’re all supposed to be confronting patriarchal attitudes, especially our own.

Photo of Staceyann Chinn reading from a sheet of paper into a microphone by David Shankbone, shared under a Creative Commons licence, via Wikimedia Commons.