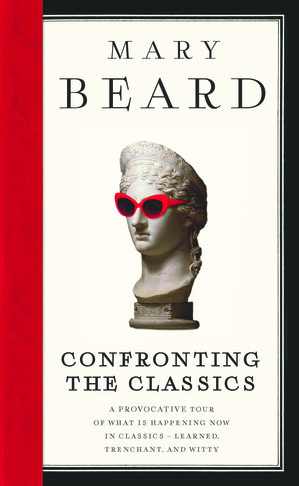 Even with a handful of TV programmes, a contentious appearance on Question Time and, obviously, an academic career in the study of ancient Rome and Greece under her belt, sadly I am more familiar with the abuse directed at Mary Beard than her work.

First there were the snide remarks from columnist AA Gill. And then Samantha Brick weighed in. Then there was the even more atrocious abuse online, which Beard documented on her readable Times blog, A Don’s Life. She has always managed to fend off these remarks with much wittier comebacks.

I picked up Beard’s latest book, a collection of her reviews with the engaging title Confronting the Classics, with the aim of redressing that balance by learning a little more about her actual work as a classicist.

The subtitle of this collection promises “a provocative tour of what is happening now in classics – learned, trenchant and witty”, and that is exactly what Beard delivers.

A collection of reviews published elsewhere, for different audiences, could seem strung together. This one doesn’t, and it comes together into a meaningful whole. Spanning reviews of academic tomes and biographies of big ancient names like Alexander the Great and Cleopatra, Beard also takes her incisive literary scalpel to relatively more pop culture topics like the I, Claudius television series from the 1970s and the Asterix books. (I wished for some more up-to-date references: of recent popular TV shows set in the classical world, neither Rome nor Spartacus makes much of an appearance.)

Not just for dusty academics, the issue of modern reactions to ‘the classics’ is an important one to analyse. It’s important both in the immediate political context (Education Secretary Michael Gove clearly yearns for Latin and Greek lessons in every school, on an equal footing with French or Mandarin) and in the broader context (walk around London some time and notice the neoclassical architectural remnants, often built with the wealth of and to sanctify the British Empire).

Even if you’re not immediately interested in these topics, Beard makes a convincing argument for the importance of a book which critically eyes up modern attitudes to ancient Greek and Roman civilisations. One small example from Beard’s introduction, in which she considers the idea that democracy was invented in ancient Athens:

Put like that, it is simply not true. As far as we know, no ancient Greek ever said so; and anyway democracy isn’t something that is ‘invented’ like a piston engine. Our word ‘democracy’ derives from the Greek, that is correct. Beyond that, the fact is we have chosen to invest the fifth-century Athenians with the status of ‘inventors of democracy’; we have projected our desire for an origin onto them.

It’s only because of our continued obsession with ‘the classics’ that I suspect most readers will know enough about ancient Greek and Roman myth, history and art to go into this book cold. That said, Beard does presuppose a certain amount of knowledge and isn’t the most accessible at times.

You might believe yourself to be relatively unphased by the machinations and resentments between archaeologists digging up Minoan palaces on Crete, or the politics of Seneca, or why some biographers want to rehabilitate Nero’s image, and what’s right and wrong with their arguments. But Beard’s reviews are entertaining enough to bring you along for the ride.

But women don’t make a very frequent appearance, although I suspect Beard tried to include them when she could

Many of these reviews in this collection are in fact skewerings. Hilarious and surprisingly interesting skewerings, but skewerings none-the-less.

One of Beard’s most common targets is the biographers of ancient celebrities, who she argues fall into the trap of wanting to tell the whole life story of their subject when there isn’t the evidence for such a task. As a result, the historians resort to making it up. As Beard acerbically puts it in a chapter on Hadrian: “A biography of Hadrian (or almost any Roman emperor) stretching over four hundred pages is bound to be largely fiction.”

As for what a feminist or social justice activist might learn from this book, Beard promises, and then delivers, “a glimpse of the lives of the vast majority of ordinary people in Greece and Rome – the slaves, the squaddies in the army, the millions of people across the Roman empire living under military occupation.”

But women don’t make a very frequent appearance, although I suspect Beard tried to include them when she could. “The dominant ideology of most of the ancient world offered women no place in public discourse,” Beard writes in an essay/review on Sappho. “The exclusion of women from politics and power was simply one side of that much greater disability – their lack of any right to be heard.” (It’s a shame she’s used disability as a metaphor here.)

There are a few glimpses: a revealing chapter on languages spoken in the Roman empire mentions a tombstone put up in what is now South Shields. It was erected by Barates, a man from Palmyra, a city in ancient Syria, to commemorate his former slave and wife, Regina, who was 30 years old when she died and hailed from an ancient British tribe called the Catuvelauni. The engraving is in both Latin and Aramaic. It’s not much, but is oddly evocative.

Sadly you can get through the whole of this collection without much more information on what life was like for ordinary women in ancient times than you probably already had.

Anyone wanting feminist heroes will be disappointed. As one of Beard’s big theme is how much we don’t know, it won’t be a surprise that the chapter on Boudicca emphasises the lack of information and the romanticising of the ancient Briton’s rebellion against the Romans.

But she succeeds more in other cases. A chapter on ex-slaves in Rome, a category of Roman citizen apparently ignored for the most part by historians, is particularly interesting. The degree to which modern historians have co-opted the opinions of the ancient aristocrats whose writings they study, in adopting a disparaging attitude to freed slaves, was revealing:

Even Jane Gardner, in an otherwise excellent chapter on ‘Slavery and Roman Law’ in The Cambridge World History of Slavery, can still refer to the ‘abuse’ of manumission (by the freeing of too many, or unworthy, slaves). There is a strange illogicality here: if slavery is always a terrible injustice (as our own morality insists), then it follows that granting freedom – for whatever reason, and whatever numbers – must be a good thing.

A textbook for young readers, written in Greek and Latin, shines a clear light on what life was like in the ancient Roman empire:

Almost every sentence captures the characteristic hierarchies, cruelties and social inequalities of ancient Rome. Slavery bulks large even in this juvenile world: it is the imperative rather than the present indicative that is the child’s favourite verbal form. (‘Get up slave, see if it’s light. Open the door, open the window… Give me my stuff, pass my shoes, fold up my clean clothes… Give me my cloak and mantle’).

But some of the best observations concern the modern world not the ancient one. When I, Claudius first screened in the US, Beard writes, it was met with triumphant reviews in part reacting to the portrayal of Livia, wife of Roman emperor Augustus of the 1st century BC, as a scheming poisoner. To have an anti-hero suited conservatives in the midst of a backlash against the women’s liberation movement.

I also had no idea how much the translators of Asterix into English have changed the jokes.

I would have liked more of this sort of thing. But one major hole for me was not enough engagement with how post-colonial writers have ‘confronted the classics’. Only a few mentions are made in passing, particularly in a review of a book examining performances and adaptations of Greek tragedy since 1969, when a radical re-interpretation of a Euripides play was staged in New York, called Dionysus in 69, “complete with improvisation, nudity, birthing rituals and an audience perched on or under ladders”.

Beard does include some tantalising thoughts about some of the post-colonial adaptations here, and makes some good points. But I kept hoping for more. If you’re going to reach back to a TV show from 40 years ago, then why not a sustained review of something like Rita Dove’s play The Darker Face of the Earth, which re-sets Oedipus in a plantation during slavery? Or even something academic like this book, Crossroads of the Black Aegean*? This is a modern-world issue, but no more than Asterix. I asked Beard about this on Twitter, and she replied that she has lectured on this subject before, so it may be that I’m just not seeing her work in the round.

Overall, this is an entertaining and informative read. Beard’s razor-sharp focus on what can be learnt from the evidence which has survived from classical times is brilliant and revealing. This kind of attempt to strip back ideology and examine bias is something we can all learn from.

*I took a brilliant class with one of the authors of this book, Michael Simpson, when I was doing my BA at Goldsmiths. I mention this because it’s only because of that class that I noticed the omission.