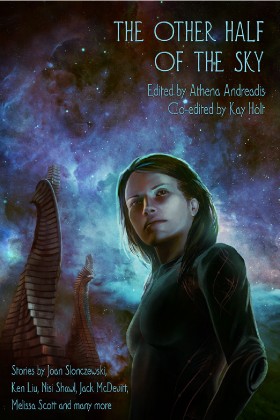 Good stuff – The Other Half of the Sky

Almost as far back as I can remember, I’ve thought of sexism as getting in the way of the good stuff. Even as a child, I found it obvious that restrictive gender norms shut off vital possibilities and stunt human connections. I saw that the automatic reproduction of stereotypes impoverished stories and flattened the characters that might live them out. Among other things, sexism meant boredom and wasted potential.

What took me longer to realise was that my idea of the good stuff was also shaped by privilege and prejudice. Having defined sexism and bigotry in opposition to ‘open-mindedness’ and ‘breadth’, I was unsettled as I noticed myself becoming ‘the sort of person’ who might dislike art because of its politics. For so long I’d argued that there should be room for more, not less. Wasn’t it wrong – limiting – to read a celebrated work of literature and see only an uncritical portrait of a stalker, rapist and paedophile? (For the curious, it was Love in the Time of Cholera.) In hindsight, this wasn’t a conundrum so much as a lack of confidence – who was I to say the Great Works weren’t so Great, just because they couldn’t see women as people?

the classic excitement of adventure tales, of spaceship heists and interplanetary intrigue, is given new life by the recognition of human complexity made possible by the lifting of gendered tropes

What ultimately eased this was my increasing familiarity with feminist and feminist-friendly writing, much of which explores possibilities beyond the tired same-old and achieves something genuinely, valuably new, despite flying under the radar of mainstream popularity. This is a fair summary of the ambition behind The Other Half of the Sky, a collection of 16 science fiction short stories edited by Athena Andreadis and co-edited by Kay Holt:

Women may hold up more than half the sky on earth, but it has been different in heaven: science fiction still is very much a preserve of male protagonists, mostly performing by-the-numbers quests. [These stories feature] heroes who happen to be women, doing whatever they would do in universes where they’re fully human: starship captains, planet rulers, explorers, scientists, artists, engineers, craftspeople, pirates, rogues…

In other words, the good stuff, expansive, unencumbered.

The collection certainly offers the great traditional pleasure of science fiction – radically imaginative worlds differing from our own in spectacular ways, from the altmatter physics in ‘Sailing the Antarsa’ to the gradated sign language of ‘The Shape of Thought’ to the mind-bending web tying together geography, economics, familial groupings, human-alien relations and identity in ‘This Alakie and the Death of Dima’. All manner of strikingly original creatures, technologies and universes are rendered with thoughtful detail – I particularly enjoyed Martha Wells’ gruesomely sophisticated predator-prey interactions.

In several stories, the classic excitement of adventure tales, of spaceship heists and interplanetary intrigue, is given new life by the recognition of human complexity made possible by the lifting of gendered tropes. So the spaceship captain of ‘Mission of Greed’ prevails in part because her second-in-command turns out reliable, despite initial mistrust between the two women and the latter’s budding romantic attachment to a mutiny ringleader. In the universe of ‘Finders’, queer polyamorous arrangements that are at once family groupings and business units provide a backstory for the (quasi-)redemptive return of a once-beloved traitor, who both sabotages and then rescues a mission to salvage powerful ancient technology from an abandoned space vessel. Many of the works also have a political edge, dealing with issues of class, racism, colonialism and refreshingly, in the case of ‘In Colors Everywhere’, transphobia.

A clear highlight is Aliette de Bodard’s suspenseful and engaging ‘The Waiting Stars’, which most effectively of the 16 stories fuses worldbuilding, characterisation, thematic depth and plot. The Dai Viet Empire’s ships are Minds, at once space vessels and members of large, close-knit families. Some, captured by the Galactics, are left derelict – necessitating a daring liberatory raid. For their part, the (recognisably white Anglophone) Galactics view the production of Minds with horror and attempt to ‘rescue’ so-called Dai Viet “refugees” through violent assimilation into Galactic society. De Bodard’s portrait of one refugee’s conflicting attachments and mixed identifications – a sense of self literally spread across stars – powerfully echoes the experience of postcolonial cultural displacement. It certainly resonates deeply with me as someone born and bred Anglophone in a former British colony.

As I reached the final story, Jack McDevitt’s ‘Cathedral’, it felt odd to share the point of view of a male character who has a romantic history with the female protagonist. This also featured in earlier entry ‘Dagger and Mask’, where the uncertain romantic status between the point-of-view would-be assassin and the heroic female target is central to the plot and theme, but in ‘Cathedral’ the relationship feels grafted on, intended to inflate the emotional impact when pilot Laura kills herself. Arguably, this contains the germ of a feminist point – Laura cares so deeply for the future of space travel, she will give up her life and the possibility of love with Matt to ensure it – but mostly I felt I was invited to find her sacrifice especially moving because of Matt‘s loss. This is a standard fixture in so much speculative fiction, but jarring after so many fresher worlds and wonders: one measure, perhaps, of the success of the collection in achieving its aims.

Image shows the cover of The Other Half of the Sky – a woman in the foreground, looking into the distance, with towers twisting into a starry sky behind her.