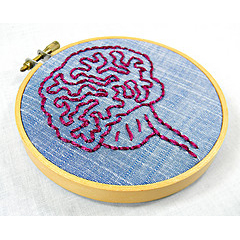 When I was 11 years old my mother was told that I had Asperger’s Syndrome. Now, as then, I feel it is a constructed category created as a result of others’ inability to understand how I work or how to interact with me as much as out of any inability to understand and interact with them. It has always puzzled me why the blame for this two-way problem gets to be thrust at the feet of the minority, but as I have gotten older I’ve realised this isn’t the only context in which such constructions appear, and I have, like most readers here, resolved to address as many of them as possible wherever I find them.

The oppressions facing individuals on the autistic spectrum intersect with the oppression of women in a number of ways: autistic communities are overwhelmingly male dominated due to the higher rate of diagnosis in men; medical research into the area has historically been focused on men to a greater extent than in other areas of psychiatry; higher expectations imposed on women to be nurturing, socially pleasing, and sexually available can increase pressure even further on girls. What is less often critiqued in public discourse is the effect that gender constructions within psychiatry have in impeding the understanding of autism and feeding into populist stereotyping.

In 1999, Professor Baron-Cohen published his famous paper “Is autism an extreme version of the ‘male brain'” in which he argues that ‘there seem to be different cognitive styles associated with being male or female’. He states that for the purposes of the article he “operationally defines the male brain type as an individual whose spatial skills are in advance of his or her social skills…regardless of biological and chromosomal sex”. In case your unscientific female brains can’t work it out, this means that your mother could have a male brain and your father a female one. Having defined skills known to be more prevalent in autistic individuals as ‘male’, or at least those that fit with existing stereotypes about maleness, he then goes on to argue that autism is an extreme version of this.

According to Baron-Cohen’s theory, because the male brain is more ‘mechanistic’ and ‘systemising’, in extreme cases this can lead to the lack of empathy or ‘mind-blindness’ seen in autistic people. There are a number of problems with this. Firstly, the whole idea of empathy is difficult. People tend to empathise with people who are similar to them – large numbers of individuals in the autistic community have very strong empathy with each other. It is empathy between autistic people and neurotypicals (autistic-speak for non-autistic people) that is more difficult, and that’s a sword that cuts both ways. Not reading the same cues in the same way is not the same thing as lacking feeling for fellow human beings, and this approach to autistic people has a tendency to demonise and other us. In ‘Zero degrees of empathy’ Baron-Cohen equates a hypothetical total lack of empathy with evil, suggesting if not stating that those of us who measure as less empathetic on traditional scales are less moral, and ignoring the role, of, say, having a strong and intellectually thought through moral code. It also ignores or marginalises other crucial differences between autistic and neurotypical minds, such as differences in sensory processing, difference in our experience of time, in stress levels and in emotional processing; often the things which autistic people are more likely to experience as disabling.

Baron-Cohen argues that there is scientific value in understanding the differences between the way male and female brains work as a group and this is not inherently wrong. While this is true, in pursuing his research in a way which defines brains as male or female by extrapolating from how these groups behave on average, he creates a significant researcher bias in favour of looking at those aspects of autism which differ between the sexes, despite those often not being the most important for autistic people themselves, and allows popular science to latch on to his theories in order to make controversial headline-grabbing claims, which become watered down to very little of substance by the final paragraph. Overall, it is an approach to science in which an academic white man is willing to exploit the obvious damage he does to women as a group in popular media in order to gain notoriety and funding for his own work. I would say that it seems he lacks empathy, but apparently I’m not qualified to tell.

Image attribution and description: The image at the head of this post is called Blue Denim and Pink Brain Anatomy Mini Hoop Art. Hand Embroidered. It was modified by Helen from an original photo by Hey Paul Studios under the Creative Commons Attribution 2.0 Generic (CC BY 2.0).