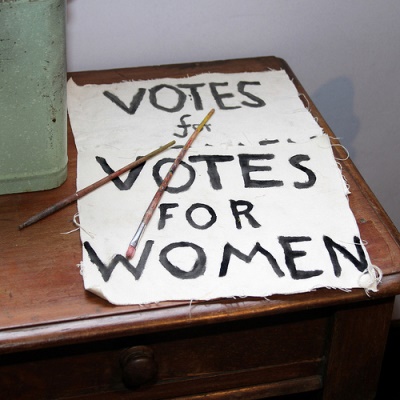 Louise Whittle urges us to remember the working class women who fought for women’s suffrage. Louise lives in Bristol and is a socialist feminist and trade union activist. She blogs at harpymarx.wordpress.com.

“No cause can be won between dinner and tea, and most of us who were married had to work with one hand tied behind us.”

Hannah Mitchell, The Hard Way Up

“Women do not want their political power to enable them to boast that they are on equal terms with the men. They want to use it for the same purpose as men – to get better conditions. Every woman in England is longing for her political freedom in order to make the lot of the worker pleasanter and to bring about reforms which are wanted. We do not want it as a mere plaything…” Selina Cooper – 1906 from Wigan Observer

On June 4th, 100 years ago, middle class suffragette Emily Wilding Davison stepped in front of the King’s horse at Epsom. She sustained head injuries and died four days later. There have been articles commemorating her death along with the impact her dramatic, tragic actions had on the women’s suffrage movement. Next month it will be 60 years since the death of working class suffragette, Annie Kenney. I wonder if there will be articles written about her struggle for women’s suffrage.

When I first read about the suffrage movement way back as a teenager, traditional mainstream books concentrated on the Pankhursts and there was an emphasis on the actions of Emily Wilding Davison. Over the years I have read quite extensively on this and given talks on the subject, and it is clear that a class divide still exists in the way women’s suffrage is documented.

The history of the women’s suffrage movement during the twentieth century has been overshadowed and dominated by middle class suffragettes: the Pankhursts and a select few others, predominantly London-centric (even though the Pankhursts started off the suffrage campaign based in Manchester).

But what about working class women activists? Who were they? Many were active in Lancashire, Cheshire and Yorkshire, often campaigning around pay issues and other matters. And many of these women were active in the textile unions.

Selina Cooper, a textile worker from the age of 10, who stood up at Labour Party conferences arguing for women’s suffrage.

Helen Silcock, who took the demand for women’s suffrage into the male-dominated TUC congresses.

Sarah Reddish, based in Bolton, a union organiser and suffragist.

Sarah Dickenson, based in Salford, another leading trade union organiser.

Ada Chew, a tailor who exposed sweated labour in her local paper, and who was also a trade union organiser.

There are countless other working class women who fought tirelessly and put themselves at the forefront of the movement… but who are now invisible.

So how has the fight for women’s suffrage been remembered?

The direct action of the suffragettes brought the campaign to the forefront of people’s consciousness, along with the dogged and courageous struggles by trade union women activists campaigning for women’s suffrage in the labour movement. However, although direct action gave the cause public attention – and we must not forget the appallingly vicious treatment women experienced while in prison (force feeding and, later, the misogynistic Cat and Mouse Act of 1913) – it was no substitute for mass organisation and building support.

Sheila Rowbotham suggests that the direct action and violence of the suffragettes was born out of despair. It must have been soul destroying and demoralising when the labour movement consistently failed (support was fragmented) to stand shoulder-to-shoulder in the fight for universal women’s suffrage. Personally, even though I question their tactics and recognise that they did not have as much to lose financially and socially through direct action as working class women, I still admire the bravery and defiance of these middle class women at a time when behaviour like this was considered ‘unladylike’ and the pressures on these women to conform to traditional roles were immense.

Nevertheless, we must address the fact that working class women have been written out, hidden from the history of the women’s suffrage movement; no recognisable trace has been left. These anonymous and invisible women had names along with political spirit and courage.

It is time to remember the contribution of these committed, brave, working class women and to give them the lasting recognition they so deserve.

One Hand Tied Behind Us: The Rise of the Women’s Suffrage Movement, Jill Liddington and Jill Norris (1978)

Hidden from History: 300 Years of Women’s Oppression and the Fight Against It, Sheila Rowabotham (1977)