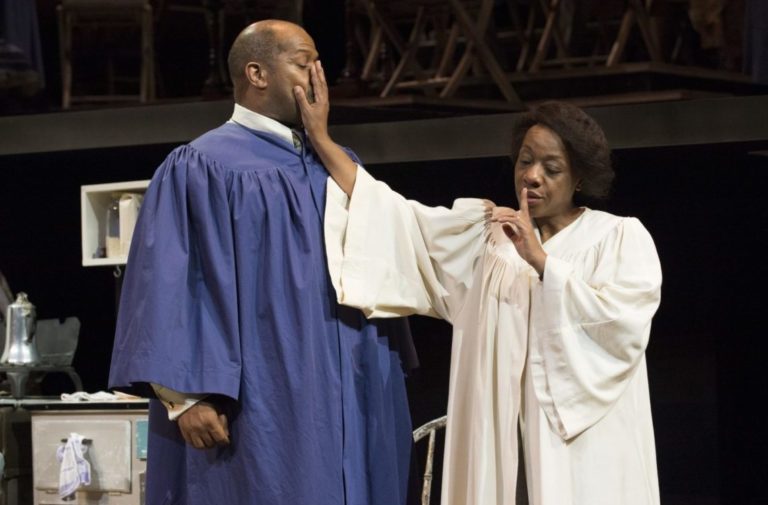 The Amen Corner is a play written in the 1950s by James Baldwin, immediately after he wrote the novel Go Tell It on the Mountain. This production is currently running in rep at the National Theatre in London; I went to see it a few weeks into its run.

The play is set in and around an African-American church in Harlem and centres on Margaret Alexander, the somewhat draconian preacher at the church. Margaret Alexander (played by Marianne Jean-Baptiste) is a single mother who lives with her sister, Odessa (Sharon D Clarke), and recently grown-up son, David (Eric Kofi Abrefa). She’s facing trouble at her church where her congregation are asking questions about the ultimate destination of their donations; have they been spent by Margaret Alexander on travel to another church or by Odessa on a brand new fridge? And she’s facing trouble at home, where her son is discovering the world of jazz, liquor and girls which lies beyond their church and worship. Into the middle of this arrives her estranged husband, Luke (Lucian Msamati), who is dying of tuberculosis. For years Margaret Alexander has told everyone that he left her when David was a little boy. When Luke arrives she is forced to admit that she left him when she found the church, and that she has been lying about their parting ever since. This new information brings existing conflicts to a head.

This production, directed by Rufus Norris and designed by Ian MacNeil, makes good use of the huge Olivier Theatre stage. So often productions on this stage can feel too small, with set dressing filling the acres of space around the actors, but on this occasion they have employed a split level stage. This means that action in the corner church can be seen at the same time as that in the flat below. There’s an almost film-like quality to some sections, where you can see the congregation members enter the church whilst the preacher Margaret Alexander prepares below. There’s also some beautiful gospel singing from the London Community Gospel Choir which is woven in and around the dialogue. This has the effect of lightening the play; there’s a lot of heavy meaningful dialogue here, so the counterpoint of the joyful singing is welcome.

The women run the church, make decisions about the jobs of the men and, as is so often the case, hold their families and communities together 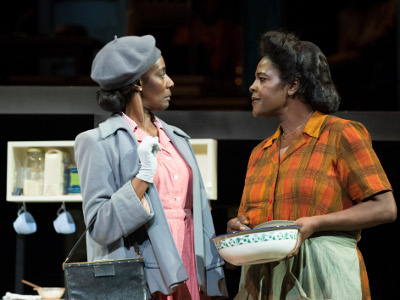 Baldwin is a good playwright and his characters are all well drawn. No one is wholly good or wholly bad and all are doing the best they can at the time with what they’ve got available to them. This is a three act play, with one interval coming at the end of the second act. This led to the first half feeling long though enjoyable. The second half, however, is where the play really comes into its own, and I was genuinely moved. I had begun to really believe in and care about the characters and their relationships and found myself rooting for an outcome that I knew in my heart of hearts was never going to come about.

This was an all black and mostly female cast. The real drivers of the play are Margaret Alexander and Odessa, as well as the two challengers to Margaret Alexander’s position of preacher, Sister Moore (Cecilia Noble) and Sister Boxer (Jacqueline Boatswain). Even the main male roles of David and Luke are mostly supporting characters. The women run the church, make decisions about the jobs of the men and, as is so often the case, hold their families and communities together. All the cast members deliver excellent performances, but Sharon D Clarke as Odessa is particularly fine. She has a real talent for delivering a one liner and brings the house down numerous of times.

What struck me watching the play was how recognisable many of the challenges facing Margaret Alexander and the other women are. They have to make decisions about whether it is better to stay with an alcoholic husband or bring up their children alone. When life has been cruel to them and left them tough and harsh, they face criticism that they have lost their softness and empathy. They have to fight tooth and nail for every tiny bit of advantage that they have and ultimately find themselves turning on each other for the sliver of power that is available to them. 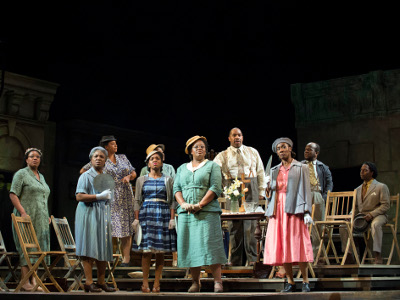 The play also explores ideas around women’s sexuality. Sister Moore is frequently at pains to point out that she has kept herself pure for the church and is still a virgin, and although the other women offer her some respect for this, at other times they laugh at her. It’s that recognisable idea that women can be virgins, or they can be wives and mothers, but no other option is available to the respectable “godly” woman than this.

Intersectionality is currently a heated topic within feminism today. The Amen Corner reminds me that although some of us may talk now about how racism and sexism intersect and how black women can be more discriminated against by white women than anyone else, these ideas are not new at all and some people have been writing honestly about them for a very long time indeed.

Overall, The Amen Corner is a fine production that has as much to say now about contemporary British society as it did about Harlem when it was written. If you are interested in the history of black feminism, American literature or even just like to hear a nice bit of gospel singing, I urge you to buy a ticket.