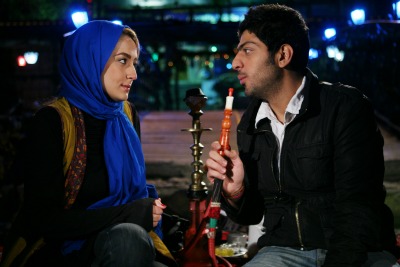 From Tehran with love: the cinema of Mania Akbari @ BFI PLUS competition

Between 14 and 28 July BFI Southbank is hosting a retrospective of Mania Akbari, one of Iran’s most distinctive filmmakers.

Born in Tehran in 1974, in 2002 Akbari played the lead role in Abbas Kiarostami’s Ten, the film comprising ten conversations in a car filmed with two cameras fixed to the dashboard, one trained on the driver (Akbari), the other on her various passengers, including her argumentative ten-year-old son.

Soon after, she co-directed her first documentary Crystal and in 2004 made her first feature, 20 Fingers. Dedicated to Kiarostami, it shows conversations between a woman (Akbari) and a man (Bijan Daneshmand), mainly in moving vehicles, but also engages directly with the politics of male-female relationships in Iran, highlighting different attitudes towards such issues as virginity, flirtation and fidelity, pregnancy and abortion, freedom and sexuality.

Throughout her work Akbari resists any suggestion that women might be considered inferior to men or that individuals and their possibilities in life should be defined according to gender stereotypes. Given the cultural-political context in which the films were made (Akbari moved to London to finish her latest film, From Tehran to London, because of the state’s clampdown on filmmaking and the arrests of several Iranian filmmakers), her work to date feels remarkably fresh, audacious and relevant.

In collaboration with BFI Southbank, we are offering a pair of tickets for the screening of 20 Fingers on Wednesday 17 July, followed by Q&A with Mania Akbari.

For your chance to win, answer the following question:

What was the first artistic activity Akbari took up?

I am waiting for your answers until 12pm on Friday, 12 July. Good luck! ania.ostrowska[at]thefword.org.uk

Photo (a still from One. Two. One. with Neda Amiri and Payam Dehkordi) courtesy of BFI.