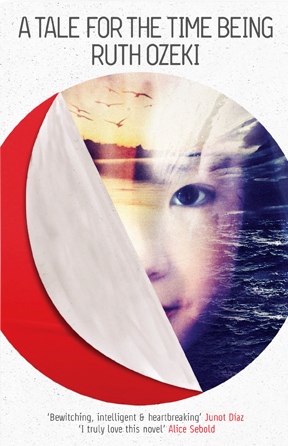 Writing is or ought to be an artful act, fiction in some sense literally artifice, but most of us are familiar with the feeling, coming away from novels, that we somehow really know a writer. For many people who love fiction, the unrealities of the imagination are often truer to who a person is than are any facts. Claire Hazelton has the odd experience, after immersing herself in Ruth Ozeki’s A Tale for the Time Being, with its partly autobiographical central character, of meeting the novelist herself to talk about bookstores, family, religion and more.

When I met Ruth Ozeki, I experienced a strange feeling of déjà vu, as if I had met her before. Of course, in a sense, I had. About two months previous, I had met a fragment of Ruth in her novel, A Tale for the Time Being, in which one of the central characters is based partially on herself.

A Tale for the Time Being focuses on two lives: that of Ruth, a half-Japanese author living on a Canadian island with her partner Oliver and cat Pesto; and of Nao, a teenage girl brought up in America, now living in Tokyo with her parents. These two geographically distant lives converge when Nao’s diary is washed up on the beach of the island – swept across the ocean by the Japanese tsunami of 2011 – and discovered by Ruth.

Image shows the cover of A Tale for the Time Being by Ruth Ozeki.

Edited on 25 July 2013 to correct a punctuation error and change the image to that of the UK edition book cover.