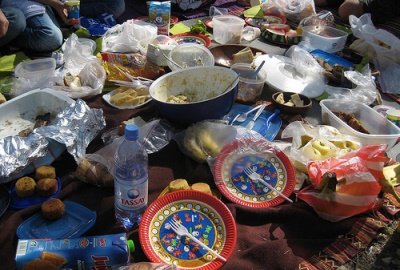 The trolls’ picnic, or setting up a feminist society

To avoid taking undue credit, I didn’t personally set up the society I’m talking about, but I’ve been personally enough involved in its running since someone else did to be able to say that it’s pretty much like the Shawshank Redemption, only with more tunnelling through shit and no fucking redemption (in the immortal words of Malcolm Tucker from The Thick of It).

No, but seriously, there is nothing like doing anything to suggest there’s something wrong with the gender status quo – the status quo under which men do so well as long as they’re cis, het, white, not disabled and preferably rich – to bring out the Man-Tolls. The Man-Trolls even bring their family along: the Ingenuous Apologists for Male Privilege show up, the Devil’s Advocates provide disgusting sandwiches, the Reverse Oppression Peddlers link arms with the ‘We’re all human, let’s ignore gender (and race and class and disability)’ Brigade and dance a merry but nauseatingly-unrooted-in-lived-experience jig while one dude gets up on a table and shouts ‘guise, guise, honest question, none of you hate me though, right?’ on loop.

Forewarned is forearmed though, so if anyone else is thinking of setting up a feminist society, you might be interested in the lessons learned by your sisters in the surprisingly happening wilds of West Wales.

Firstly, if you’re going to bravely act on such a scary thought, you’re probably a right-on, justice loving kind of person. You obviously care about society and humanity. You probably like humans. Which makes you vulnerable to giving historically oppressive groups of humans the benefit of the doubt and trusting that profound differences not just of opinion but of material interest will just work themselves out.

So if you have a particular idea of what feminism means, a baseline like feminism being about the liberation of women, then better to have a People’s Front of Feminist Judea and a Feminist Judean People’s Front than to let that be compromised from the off by people who have some other baseline. Or by people who feel they do quite well out of women not being liberated. Like-minded people with a sense of shared interest get shit done together. Also, it is amazing how many people’s feminism is not about the liberation of women.

But if your feminism is about the liberation of women (still a nice, broad baseline) then the agenda of your feminist society needs to set by women. Honestly, we know best about how to get ourselves liberated and what’s currently keeping us un-liberated.

You may need autonomous spaces within your society as well: Women of Colour don’t traditionally get a very good deal in white-dominated spaces after all, and I prefer to discuss mental health issues and feminism with feminists who’ve got actual experience in the area. That’s at least two autonomous spaces you might want to create room for right there. A caucus system might be in order. Although you obviously shouldn’t create caucuses for any groups you don’t belong to. But you can actively encourage their creation and make it clear they’d have a deciding role in setting the society agenda.

If people are requesting autonomous spaces covertly though, for fear of re-awakening the Man-Toll clan (again!), you know you’re in trouble. So do not hesitate to come down hard and heavy on that clan from the beginning. Seriously, I would advocate zero tolerance, but compromise by strictly enforcing the three strike policy I’m mandated to enforce as a Facebook administrator for the group.

If you have a Facebook group (or a Twitter account or whatever), there should never be just one administrator, for their own sake as much as anyone’s. Spread that power and any responsibilities. That way you spread a sense of group ownership too. Also, don’t be scared of structure; it’s not the same as hierarchy. It can help keep things transparent and people answerable. You might want to think about elected positions (especially if you’re going to have any group money) and consensus-lead decision-making models. Take and distribute minutes from any meeting so people can stay up-to-speed regardless of ability to attend.

If you want something more casual though (fair enough – people are busy!) you may find it’s less problematic to present yourself as more of a network through which like-minded people can find each other when they want to do particular feminist things, rather than as a formal group.

I know it sounds like a lot of hard work (or tunnelling through shit, to return to my opening analogy) but it will be worth it even if there is no ultimate redemption (patriarchy is still going strong in West Wales, unfortunately). You can’t put a price on knowing there are like-minded people in your physical vicinity, not just on the internet, and giving each other that kind of affirmation is a feminist achievement in itself.

Under those circumstances, you can get more shit done together too – we have.

Photo of the remains of a picnic by Celiemme, shared under a Creative Commons licence.