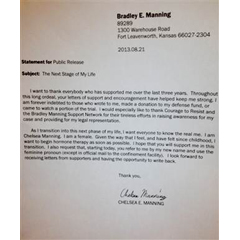 “the CPU is not made for this motherboard”

The history of the case is set out below. Taken from the Wikipedia entry for Ms Manning, I’ve made minor edits to update her gender pronouns:

Assigned in 2009 to an army unit based near Baghdad, Manning had access there to databases used by the United States government to transmit classified information. [She] was arrested in Iraq in May 2010 after Adrian Lamo, a computer hacker, told the FBI that Manning had confided during online chats that [she] had downloaded material from these databases and passed it to WikiLeaks. The material included videos of the July 12, 2007 Baghdad airstrike and the 2009 Granai airstrike in Afghanistan; 250,000 United States diplomatic cables; and 500,000 army reports that came to be known as the Iraq War logs and Afghan War logs. Much of the material was published by WikiLeaks or its media partners between April and November 2010.

The IRCs (Internet Relay Chats) between Ms Manning and Mr Lamo were logged and those documents found their way on to the web in 2010 (see Wired and BoingBoing). It didn’t take long for it to become clear that, during the course of those IRCs, Ms Manning had told Mr Lamo of her gender identity (emphasis mine):

(1:13:10 PM) bradass87: i just… dont wish to be a part of it… at least not now… im not ready… i wouldn’t mind going to prison for the rest of my life, or being executed so much, if it wasn’t for the possibility of having pictures of me… plastered all over the world press… as boy…

(1:31:40 PM) bradass87: i just wanted enough time to figure myself out… to be myself… and be running around all the time, trying to meet someone else’s expectations

(1:34:11 PM) bradass87: waiting to redeploy to the US, be discharged… and figure out how on earth im going to transition

(1:34:45 PM) bradass87: all while witnessing the world freak out as its most intimate secrets are revealed

(1:35:06 PM) bradass87: its such an awkward place to be in, emotionally and psychologically

Perhaps unsurprisingly, this provoked numerous blog posts and protracted discussions across various sites, with the estimable Emily Manuel’s post at Global Comment some 18 months further down the road summarising what many trans people may well have been thinking for some time:

Private Manning has endured horrendous treatment in prison waiting for trial. But listen again to what she had to say, in chats whose validity would seem to have been proved over the weekend: “I wouldn’t mind going to prison for the rest of my life, or being executed so much, if it wasn’t for the possibility of having pictures of me… plastered all over the world press… as boy.”

This kind of “ungendering,” as trans theorist Julia Serano has argued in her landmark book Whipping Girl, is itself harmful, an act of violence by a world that has little inclination for respecting the self-identification of transgender people and exposes them to violence in every sphere of society.

Which brings us back to the here and now. Ms Manning’s two-month long trial finally reached its conclusion yesterday, 21 August 2013, with her conviction of violations of the Espionage Act and other offenses. She was sentenced to 35 years in prison and dishonourably discharged. And today (22 August 2013), Ms Manning announced:

As I transition into this next phase of my life, I want everyone to know the real me. I am Chelsea Manning. I am a female. Given the way that I feel, and have felt since childhood, I want to begin hormone therapy as soon as possible. I hope that you will support me in this transition. I also request that, starting today, you refer to me by my new name and use the feminine pronoun (except in official mail to the confinement facility).

How Ms Manning’s intention to transition while in confinement will play out remains to be seen. Even without the rocky road she’s travelled to reach this point, beginning transition would be a huge step, as it is in any trans person’s life. However, in this instance, her problems would seem to be compounded, not just by being imprisoned, but by being confined in a military prison. The first hurdle will be obtaining gender appropriate accommodation. The record of prisons generally in this area is lamentable and the result is the unnecessary exposure of trans women prisoners to extreme transphobic violence. Additionally, there is the question of obtaining appropriate medical support during transition, as pointed out in this article in Courthouse News on 20 August 2013 (emphasis mine):

“All inmates are considered soldiers and are treated as such with access to mental health professionals, including a psychiatrist, psychologist, social workers and behavioral science noncommissioned officers with experience in addressing the needs of military personnel in pre- and post-trial confinement,” [Ft. Leavenworth spokeswoman] Lewis said in an email. “The Army does not provide hormone therapy or sex-reassignment surgery for gender identity disorder.”

As to why Ms Manning chose this particular moment to make her announcement, we can only speculate – a pointless activity at the best of times, in my opinion. And while we may be thinking of her and hoping she receives the best possible outcome, in practical terms there seems to be little else we can do at the moment – although her wish to receive correspondence from supporters can be fulfilled by writing to her directly at the address below. Please note the proviso in her announcement that ‘official mail to the confinement facility’ should not use her ‘new’ name or pronouns.