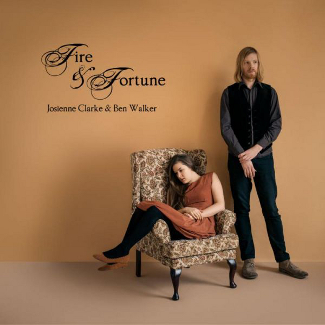 Josienne has a highly individual and captivating voice which is displayed to great effect on Fire & Fortune, their third joint release. Together with intelligent and articulate lyrics focusing on the politics of the personal and Ben Walker’s stunning musicianship, there is a strong awareness of the history and traditions of folk music. However, they are also never afraid to take chances, either in their arrangements of the pre-existing material or in their own songs and lyrics. The boundaries between the familiar and the new are effortlessly broken down and rebuilt and the result is a sound which is both intimate and spacious. These elements come together from the start of the album and reappear throughout, weaving everything together as a seamless whole, while still allowing each song’s individual identity to stand out.

Opening track ‘After Me’ provides the first hint that this is no ordinary folk album. Contrary to all received wisdom from the behemoth that is the music industry, the song doesn’t leap up and beat the listener about the ears. Instead, it tiptoes in and the effect is more akin to a quiet but insistent whispering in the listener’s ear. The strings of Basia Bartz (violin) and Jo Silverston (cello, on loan from Emily Barker & The Red Clay Halo) weave around Josienne’s melody to draw the listener further in.

‘The Month Of January’ is the first of the five traditional songs featured on this album. I was aware of it from the version recorded by June Tabor on her 1983 album Abyssinians but Josienne and Ben’s reworking of it is a revelation. In place of the austere, largely unaccompanied rendition on Abyssinians, the backbone here is Josienne’s tenor recorder which, after setting the scene with a verse of the song’s melody, is electronically looped to create a drone over which Josienne plaintively sings the ancient warning about falling in love with “the beauty of a young man”. John Parker’s double bass adds a dark depth to the proceedings and the whole is somewhere between the sonic equivalent of a J.M.W. Turner watercolour sunset and a hitherto unheard ambient piece by Brian Eno.

The combination of ancient and modern continues in ‘The Seasons’, another traditional song given a new lease of life by a quietly confident, almost jazzy arrangement, with Josienne’s tenor saxophone leading over fingerstyle guitar and double bass. The melody hangs over a dreamy multi-tracked choir of Josiennes like a harvest moon over an autumnal mist. This gem of bucolic reverie is quite magical and my only (minor) criticism is that the fade-out comes too soon and is perhaps a little abrupt. 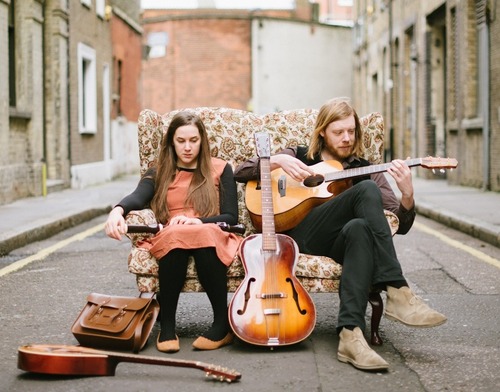 The great strength of a deceptively simple song like ‘Another Perfect Love’ is that its structure allows for a variety of arrangements. At the recent album launch, Josienne and Ben (on piano) were augmented by a rhythm section, a backing vocalist (Samantha Whates) and a string trio, a combination which on paper had the potential to swamp the delicate melody but which turned out to be one of the most powerful performances of the evening. On record, it’s a sparser affair which foregrounds the lyric – a world-weary plea for acceptance – against Jim Moray’s piano as the cymbal brushes and double bass hold down a minimalist groove.

‘My Love Is Like A Red Red Rose’ is an interesting proposition. Attributed to a 1794 song in Scots by Robert Burns based on traditional sources (Source: Wikipedia), it continues the lyrical theme of snapshots of personal relationships. Meanwhile, Ben’s acoustic guitar arrangement provides a delicate backdrop to Josienne’s soaring voice, with Jo’s restless cello rounding off one of the prettiest versions of this song that I’ve heard.

‘Sycamore Tree’ moves us from juxtaposition to irony: although written and arranged by Josienne and Ben, it’s one of the most traditional sounding songs on Fire & Fortune. However, the attention to detail that the musicians lavish on it (including Basia’s violin and Jo’s cello) add a quality that moves it beyond pastiche. Again, the production is empathic, allowing the song to breathe and simultaneously creating a sense of space and intimacy.

From a feminist perspective, I’d like to think they were making a point about how a relationship which follows a patriarchal romantic script can slide almost imperceptibly into abuse and extreme violence

Title track ‘Fire and Fortune’ continues the breaking down of musical boundaries: a hypnotic loop of multitracked vocals, kick drum and fingerclicks provide the rhythm for a lament on the subject of the breakdown of communications in a relationship as a precursor to the breakdown of the relationship itself. There’s also a video to accompany this song (link here) but I’d recommend approaching it with caution as it contains some quite disturbing images of violence against women. Josienne talks about the practicalities of making the video here, but I’m still left wondering what they were aiming for with it. From a feminist perspective, I’d like to think they were making a point about how a relationship which follows a patriarchal romantic script can slide almost imperceptibly into abuse and extreme violence but, from Josienne’s blog, it seems the aim was simply to make a compelling video on a tight budget:

“So when we first met with our friend and film-maker Richard Bardsley about making us a video we basically gave him a list of things we DIDN’T want and the brief that we needed to be in it, and he (being slightly twisted) came up with the ‘Joan of Arc’ treatment.”

‘Green Grow The Laurels’ returns to the wellspring of traditional folk music for its source. Even though its exact provenance seems unknown, it’s been covered by a good few singers, Norma Waterson, Cara Dillon and Sandy Denny among them. Josienne and Ben’s version retains the simplicity of the original, allowing the elegant string arrangement to add new depth to the age-old story of unrequited love.

With its pulsing introduction of Ruairi Glasheen’s bodhran and John Parker’s double bass driving Ben’s acoustic guitar behind Josienne’s impassioned lyric about betrayal and jealousy, ‘Anyone But Me’ is one of the strongest tracks of the album. At the album launch, the live version was an almost primal howl which, although perhaps more muted here, nevertheless retains its power and fury.

Modulating between minor and major chords, the deceptively spacious ‘No Such Certainty’ generates a tension which reflects the self-doubt of the words

In contrast to this, ‘A Pauper And A Poet’ is an optimistic musing on the existential search for meaning and the need for creative self-expression. Lifted by the violin and harmony vocals, this song exists at the margins of folk and country & western music – and is none the worse for that!

“And let nobody tell what you must be

Modulating between minor and major chords, the deceptively spacious ‘No Such Certainty’ generates a tension which reflects the self-doubt of the words. A thoughtful classical guitar break and distant harmony vocals provide a subtle musical counterpoint to the questioning lyric.

The traditional ‘When A Knight Won His Spurs’ is a fine choice for the closing song; featuring a simple arrangement of Ben’s guitar and Josienne’s voice, it sums up the lyrical themes and preoccupations of the album and signs off with an optimistic plea for the future:

“Let faith be my shield and let hope be my steed

Against the dragons of anger, the ogres of greed

And let me set free with the sword of my youth

From the castle of darkness the power of truth”

A sense of space is key to this record and it’s due in no small part to Ben’s engineering and production skills. This isn’t to say that everything has been given a generous helping of reverb; to the contrary, being unafraid to close mic is one of the strengths of the sound. An awareness of, and respect for, the spaces between the notes is arguably a rare and special thing these days and there are times when Fire & Fortune is as much ambient music as it is folk.

In their four years working together, Josienne Clarke and Ben Walker have received a huge amount of recognition and yet still seem to be one of the best-kept secrets in the field of contemporary folk music. This unsatisfactory state of affairs is despite being almost perpetually either gigging or recording, despite having won the prestigious Isambard Folk Award in 2012 and despite producing consistently and eminently listenable contemporary folk music. This lack of wider recognition is long overdue for change and, if there’s any justice in this world, Fire & Fortune will be the landmark album which sees the music of Josienne Clarke and Ben Walker finally cross over to the mainstream.

02 The Month Of January

12 When A Knight Won His Spurs

1. Album cover. Josienne (left) lounges sideways in an old-fashioned looking brown/white sofa chair on a beige floor. Her legs are draped over the right arm and she appears to be deep in thought. She wears a burnt orange dress [Edit: this relates to the shade of the dress] and matching flat slip-on shoes with black tights. Ben stands to the right of the chair, behind Josienne, clasping his right wrist with his left hand and looking to his left. He wears a black shirt, black velvet waistcoat, black trousers and brown lace-up shoes. He is casting a slight shadow on the starkly plain and light orange wall behind.

2. Josienne and Ben sit on a two-seater sofa in the middle of an empty road. The sofa has the same print as the chair on the album cover. Josienne (left) looks down slightly to her left. There is a light brown satchel on the ground on her right and an instrument appearing to be a guitar is laid out in front. A cello is propped up at the midpoint of the sofa. Ben (right) is playing a guitar. His right leg is crossed over his left.