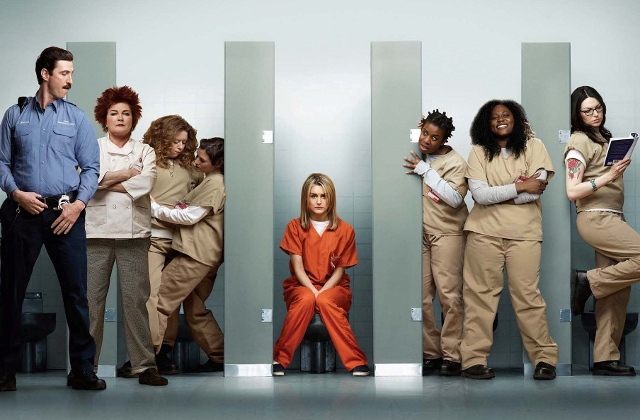 It may seem at first glance that show creator, Jenji Kohan, has offered an alternate take on her eight season hit Weeds, namely because there’s a whiny white girl protagonist knee-deep in the criminal world. But the demographic occupied by lead character Piper Chapman (Taylor Schilling) is really the only similarity apart from the often risqué humour and killer one-liners. This isn’t just Bad Girls with jokes but Orange does attempt to keep the grit and compassion along with the snappy dialogue.

However, it doesn’t slip into protracted apologia either. One common thread is that most of these inmates accept that their choices brought them to this point. The variation is in how some wear those choices as a badge of honour while others merely want to keep their head down and serve out their time.

One strong and prevailing message is that we are all one choice away from ruin, none more so than those without safety nets. The stories are as varied as they are complex: women who kill to protect children, those driven by economic hardship to desperate acts, those manipulated by the men in their lives or suffering the consequences of failure of traditional support mechanisms like the family unit. Unfortunately, as in life, the consequences are remarkably similar and stable.

Often, in trying to avoid prejudice, there can be an erasure of culture and diversity, which essentially makes every group fit a vaguely white, middle-class experience

As with so many ensemble dramas, the use of flashback is used to expose a new backstory in each new episode. This works especially well, as the women drift in and out of each other’s limited prison orbit, whetting the appetite of the viewer to find out how a promising track star ends up in prison or how a docile yoga lover has a past she prefers to keep hidden. Even the discussion of abortion takes on some different twists, focused mostly on Pennsatucky (Taryn Manning) and Daya Diaz (Dascha Polanco), the latter after a relationship with one of the guards.

No show is perfect, of course, although it could be said that this is one that can be recommended to almost anyone with very few caveats. However, one could be that, while there is representation of black and Latina women explored in the the show as fully-developed characters outside of the white narrator’s immediate circle, Asian characters are represented by one inmate who barely gets a line.

There has been a lot of discussion of race, not least because Orange is framed around a white woman in a ‘fish out of water’ situation. It’s frustrating to think that this may have been seen as necessary because of the notion that the show wouldn’t have sold if it had been packaged simply as a diverse ensemble drama set in a women’s prison. That said, while Orange seems to dish out stereotypes in every demographic at first, there’s a subtlety in overturning these as the episodes progress. Often, in trying to avoid prejudice, there can be an erasure of culture and diversity, which essentially makes every group fit a vaguely white, middle-class experience. Orange does better on this front, and you can’t miss the discussion of ‘white people politics’ by Taystee (Danielle Brooks) and Poussey (Samira Wiley) in episode six.

Taystee and Poussey’s is a formidable friendship, with themes of unintentional sisterhood and collaboration threaded throughout the series. Alliances of convenience, familial ties and genuine friendships are given at least as much weight as the show’s romantic plots, and that alone is worthy of celebration.

There have been understandable criticisms about an early description of Piper as an ‘ex-lesbian’, problematic language that is actually used to show the limitations of some characters. The show does move on to discussing sexuality as a spectrum, something of an unusual truth in a medium where sexuality is often only as fluid as the ratings.

As imprisoned women, the issue of consent and sex comes front and centre quickly and there’s no shying away from the disparity of rights in a situation where men are put in charge of ultimately vulnerable women. This power play and the unfairness of it becomes more prominent as the first season progresses and, in places, the urge to throw things whenever a certain character appears is strong. Once again, Orange resists the obvious good vs bad tropes, humanising the worst of the guards, but never allowing us to forget how easily they slip into the role of predator.

Prison is a minefield of issues that make for good drama and Uzo Aduba‘s portrayal of Suzanne Warren is a standout amongst a stellar ensemble cast. With an introduction to her character as ‘Crazy Eyes’, the discussion of ‘psych’ care inside will leave you refusing to use that cruel nickname again. The relationship between mental illness and crime is ripe for further exploration by the end of the 13 episodes, particularly as we await Suzanne’s backstory.

Another tremendous performance comes from Laverne Cox, the first trans woman of colour to have a prominent role in a major scripted television show. As Sophia Burset, she navigates the minefield of offensive language and very real threats, providing a vital part of the inmate infrastructure with her salon skills and friendship with the other women. The realities of transition are handled with grace, along with the heartbreak of rejection and financial realities of being denied appropriate medical care while incarcerated. The departure from the media staple of only offering transgender characters as sex workers is a notable one.

If television can broadly be recognised as more fertile ground for actresses than movies, this is hopefully a continuation of that trend

Natasha Lyonne (as Nicky Nichols) and Kate Mulgrew (as ‘Red’) make memorable impressions as the trust fund junkie with a heart and the Russian woman who rules the prison kitchen with an iron first, respectively. If you’re having doubts about whether the show is one worth investing in, stick it out until the fifth episode and watch the alchemy of the show’s establishing elements come together. Age and conventional attractiveness are no barrier to the weight or meatiness of anyone’s storyline.

Finally, as a queer woman, it’s been a relief to see a critically-lauded and buzzworthy show where the prominent romance is between two women. Piper finds her incarceration complicated by the presence of her ex, Alex (Laura Prepon), the woman who involved her in her drug-smuggling operation to begin with. Although Piper’s devoted fiancé, Larry (Jason Biggs), is waiting for her in the outside world beyond the prison, it’s clear that Alex and Piper have unfinished business. If love triangles are an overused device when it comes to televised romance, at least this one shakes up the conventional order of things. While the clichés of lesbianism in prison occasionally appear, there’s a deftness in handling them that makes characters like Tricia (Madeline Brewer) and Big Boo (Lea DeLaria) as real and complicated as any other character. No one is reduced to a simple label here.

You might notice that the male characters are barely mentioned throughout this review. While they are relevant to the plot, often largely due to malice or incompetence, the show is resolutely not about these men. The acting and their characterisation doesn’t suffer for a second, but we get to focus on the women and their stories for a change and let the gentlemen retreat to supporting roles and sometimes uncomfortable comic relief. If television can broadly be recognised as more fertile ground for actresses than movies, this is hopefully a continuation of that trend.

Thirteen hours of refreshingly different television await you, but unlike the inmates of Litchfield prison you might find yourself wishing the sentence was just a little bit longer.

Lola Ripley lives in London, where she watches far too much television when she should be working on her second novel. She’s particularly concerned with the representation of women and LGBTQ people on screen.Tweet her @LolaRipley and read more of her work at her website