Why does disability make people more vulnerable to domestic abuse? 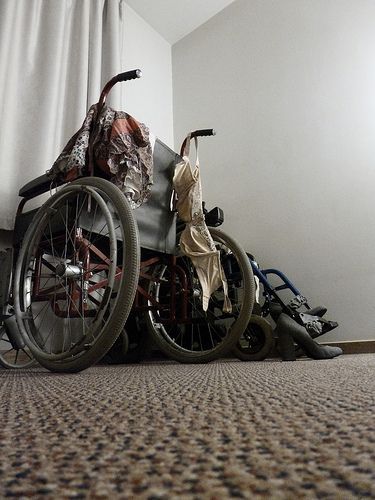 Before I came to terms with my own experience of domestic violence, I might have imagined that vulnerability to abuse would be about being attracted to a certain “type”, being a little self-destructive,submissive or gullible. If I knew that disabled people were twice as vulnerable to abuse, I might have imagined that this was because disability throws up a load of stressful situations and – as I could testify – people like me were hard to live with.

In fact, how vulnerable you are might be better understood as the number of excuses an abuser could find to mistreat and control you. Never good excuses – terrible excuses, in fact – but excuses that might convince, or partially convince, a particular victim and sometimes the people around them. Such as the idea that people like you are hard to live with.

Disabled people are more vulnerable to domestic abuse because society hands out a hell of a lot of excuses. There are ways in which certain impairments increase practical or social vulnerability (e.g reduced capacity to ask for outside help), but by far the biggest issue is that disabled people are made to feel as though we are less deserving of good treatment. Media representation and political rhetoric present us as burdensome, costly, sometimes wilfully idle, with the facts of our lives a source of suffering to both ourselves and those around us. We rarely see people like us presented as attractive, complex or even heroic outside the highly-conditional frame of triumph over adversity. Meanwhile, the effects of increasing poverty, unemployment, discrimination and poor access can further batter our sense of self-worth.

It is easy to fall into a rhythm of constantly justifying one’s existence, apologising for being an inconvenience and responding with disproportionate gratitude towards people who do anything for us, even the slightest favour, even when we are paying for a service. There is a presumption that the partners and family of disabled people have strenuous caring duties, which they perform as selfless heroes. Usually people outside a household have no idea about what care involves, the distribution of labour and financial arrangements, but the assumption is that a disabled person is dependent, troublesome and unable to give anything back. Following the abuse of former motorcycle stuntman Eddie Kidd, a typical response is that, “the immense stress of caring responsibilities – particularly for an intimate partner or family member – can easily spill into lost tempers and violent reactions.”

Even paid carers are often regarded as if they are doing this work out of the kindness of their hearts. This is one reason why they are poorly paid (often under minimum wage), but our failure to treat this as a job requiring as much competence, professionalism and accountability as any other, also leaves elderly and disabled people vulnerable to the kind of abuse reported in the news in recent weeks.

People used to sympathise with and admire my ex-husband for taking care of me, without having a clue what that actually entailed. And such attitudes are contagious; I considered myself lucky and was truly grateful, even though my needs were rarely met and I was shouted at every day. I thought his criticisms, accusations and questioning my limitations were part of the natural frustrations any person would feel around me. I knew there were no excuses for physical violence, but that was on a spectrum alongside treatment I considered normal.

People with mental ill health are particularly vulnerable to abuse and violence generally, not because they’re difficult people, but because there are so very many excuses. Our cultural stereotypes of people with mental illness include the idea that they imagine or confuse events, blow small incidents up into big disasters and worse, that they themselves are manipulative, cruel and even dangerous. The idea that others need to control and coerce a disabled person for their own good is never more prevalent than when it comes to mental illness, especially women who might be cast as being a danger to themselves and their children.

In recent years, all domestic violence resources have suffered from the cuts, but disabled people – already excluded from many life-saving resources – have become even more vulnerable. Benefit cuts and changes make it more difficult for disabled people to live alone or to live with other people without becoming financially dependent. Government and media rhetoric has contributed to a marked increase in violence and verbal abuse on the street. This is bound to have a knock-on effect to the way disabled people see ourselves and what we’re should expect at home.

Disability is not unique in the stress it puts on families and relationships. Abuse is not caused by people becoming exasperated and lashing out. Stress can certainly cause arguments and even family breakdown, but domestic violence is about control and power. Disabled people will become less vulnerable when we have more control over our lives and are allowed to see ourselves as the whole, complex and contributing individuals we are, rather than the unwieldy baggage of our families, partners and society at large.

Image by D H Kelly is taken from floor level, looking up at the back of an empty wheelchair strewn with clothes including a bra and with high heeled shoes on the floor next to it