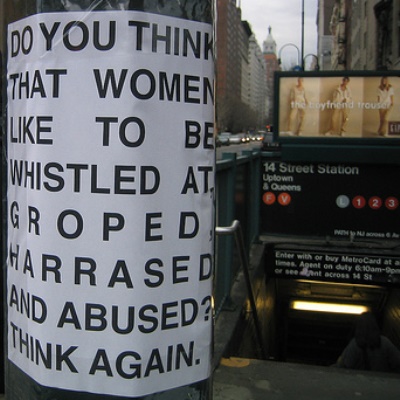 Ndéla Faye on how men’s dominance of space – both physically and through street harassment and victim blaming – oppresses women. Ndéla is a recent MA Journalism graduate and tweets here.

Hairy legs – or rather leggings that look like hairy legs – are the newest innovation in China to avoid unwanted male attention and groping on public transport. The notion that it is up to women to change their appearance into what is deemed ‘unattractive’ in order to ward off sexual harassment is ludicrous and feeds into the view that women are somehow to blame for the attention they receive, regardless of whether they want it or not.

Let’s face it: whether a woman is dressed in a potato sack or walking down the street naked, it’s not an open invitation. But a woman’s attractiveness has very little to do with why men catcall, it’s about more than that – it’s about the invasion of a woman’s space. As women, we are bombarded with messages that discourage us from walking down dark alleyways at night time. That tell us we shouldn’t wear dresses that are too short, that we should watch how much we drink. That we should know better. But at what point do we stop to assess the unfairness of the messages we’re sending: instead of constantly policing women’s bodies, when will we stop and tell men how to behave? When will we teach them to not catcall? Or how not to rape?

The media interest in recent street harassment projects around the globe shows that men’s invasion of women’s space is a worldwide problem: witness Tatyana Fazlalizadeh’s ‘Stop Telling Women to Smile’ street art, Sophie Peeters’ documentary on the street harassment she encountered on a summer’s day while walking around Brussels, or Hannah Price’s photography that turns the lens on harassers, invading their space in the same way they invade women’s by shouting at them.

From an early age girls are taught to cross their legs, not to shout too loud. Although things are changing, there are still clear discrepancies in how we treat women and the expectations we set for boys and girls differ greatly. Beauty standards dictate that women should be petite and fairy-like – Lily Meyer’s poem ‘Shrinking Women’ (below; transcript after the jump) focuses on women’s and men’s differing sense of entitlement to space. “You have been taught to grow out, I have been taught to grow in,” – as a girl, she feels that she’s been encouraged to occupy as little space as possible in the world (whether by regulating her weight or by the way she sits).

The danger in this is a sense of entitlement for men in a particular space. A number of blogs document how men use up space on public transport by spreading their legs, hogging the arm rests and putting bags on seats, while women sitting next to them are forced to take up as little space as possible. Several women on these blogs highlight the fact that even while walking, men tend to plough straight into them, whereas they’re expected to swerve out of men’s way. This kind of social conditioning where women are expected to move out of a man’s way is detrimental to our growth.

The argument that sometimes women are guilty of similar things misses the point. As the “Move The Fuck Over, Bro” tumblr explains:

…the social context is totally different. Women are trying to establish themselves in the social world and resist the pressure to be small and reduce themselves into compliance, men are just following the social order to impose themselves on others and be dominant; they are acting from a position of power, women are not.

Continuously being told that we are somehow responsible for the harassment we receive and must confine our bodies into tight spaces prevents us from growing to our fullest potential. Literally and figuratively. Until things change we might just have to sit quietly in our seats, squashed against a window, with our hands in the laps of our hairy-looking leggings.

Photo by Ari Moore of a poster stuck to a lamppost outside a subway entrance in New York. The poster reads “Do you think that women like to be whistled at, groped, harassed and abused? Think again”. Shared under a Creative Commons licence.

Across from me at the kitchen table, my mother smiles over red wine that she drinks out of a measuring glass.

She says she doesn’t deprive herself,

but I’ve learned to find nuance in every movement of her fork.

In every crinkle in her brow as she offers me the uneaten pieces on her plate.

I’ve realized she only eats dinner when I suggest it.

I wonder what she does when I’m not there to do so.

Maybe this is why my house feels bigger each time I return; it’s proportional.

As she shrinks the space around her seems increasingly vast.

She wanes while my father waxes. His stomach has grown round with wine, late nights, oysters, poetry. A new girlfriend who was overweight as a teenager, but my dad reports that now she’s “crazy about fruit.”

It was the same with his parents;

as my grandmother became frail and angular her husband swelled to red round cheeks, rotund stomach

and I wonder if my lineage is one of women shrinking

making space for the entrance of men into their lives

not knowing how to fill it back up once they leave.

I have been taught accommodation.

My brother never thinks before he speaks.

I have been taught to filter.

“How can anyone have a relationship to food?” He asks, laughing, as I eat the black bean soup I chose for its lack of carbs.

I want to tell say: we come from difference, Jonas,

you have been taught to grow out

I have been taught to grow in

you learned from our father how to emit, how to produce, to roll each thought off your tongue with confidence, you used to lose your voice every other week from shouting so much

I learned to absorb

I took lessons from our mother in creating space around myself

and I never meant to replicate her, but

that’s why women in my family have been shrinking for decades.

We all learned it from each other, the way each generation taught the next how to knit

weaving silence in between the threads

which I can still feel as I walk through this ever-growing house,

picking up all the habits my mother has unwittingly dropped like bits of crumpled paper from her pocket on her countless trips from bedroom to kitchen to bedroom again,

Nights I hear her creep down to eat plain yogurt in the dark, a fugitive stealing calories to which she does not feel entitled.

Deciding how many bites is too many

How much space she deserves to occupy.

Watching the struggle I either mimic or hate her,

And I don’t want to do either anymore

I asked five questions in genetics class today and all of them started with the word “sorry”.

a circular obsession I never wanted but

still staring at me with wine-stained lips from across the kitchen table.