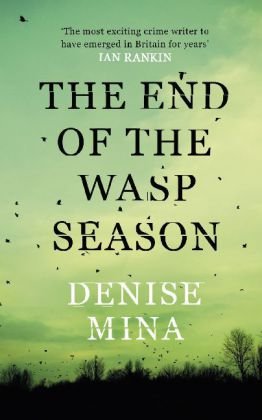 I first picked up this book on the basis of wanting to read a crime novel, but simultaneously wishing to avoid the male protagonist. This wasn’t a decision based on an inbuilt mistrust of male police officers or anything nearly so damning, but merely a search for something a little bit different. A woman writing about a female police detective with armfuls of baggage seemed just the ticket.

And when that woman is Denise Mina, an author as artistically inseparable from Glasgow as Ian Rankin is from Edinburgh, the decision was a no-brainer; some gritty ‘Tartan Noir’ to supplement my love of Taggart re-runs? I’m there!

The particular novel of Mina’s that I chose was The End Of The Wasp Season, the second of her novels featuring DS Alex Morrow as the protagonist. The End Of The Wasp Season focuses on two – apparently unconnected – deaths. Of course, in a crime novel there is no such thing as coincidence or superfluous information – they’ve got to be connected…but how? The brutal beating to death of a young woman in a wealthy suburb of Glasgow and the suicide of a middle-aged man in the south of England. This plot’s pretty thick already…

Obviously I’m not going to reveal the link here, but let me make it clear that this is not a whodunit. You don’t need to be Columbo to figure this one out, but you do need a certain interest in the human condition and, in particular, the human psyche. There are a lot of brilliantly depicted characters captured in this novel and the fantastically awful family of the suicide victim are my favourites. There’s the drugged-up housewife (stereotypical, I know, but harrowing nonetheless), the psychologically unhinged daughter whose precociousness borders on the creepy and the son whose psychological and physical meanderings from manhood to childhood paint him as painfully vulnerable. Such characters mean that The End Of The Wasp Season hums with mental unbalance.

The wonderful thing is that this is not a novel about mental illnesses and those who have them, nor is it set in a psychiatric dystopia. In fact many of the characters are ‘normal’. They have the same mental quirks, the same instincts and the same unacknowledged imperfections as everyone else; it’s just that some are clearly too far down the road of mental ill-health to continue without intervention or tragedy.

Let me not forget DS Alex Morrow, a wonderfully well-drawn police detective whose job it is to unpick the gruesome murder of Sarah Erroll. She’s an emotionally fleshed-out character, whose murky history follows her around like a cat with a tin tied to its tail, in particular her dodgy brother whose presence in this novel, while infrequent, is genuinely sinister. She curses her boss and makes choices that she knows are wrong, alongside all manner of other things that make her so tangible and relatable.

Least of all of these elements is that during this novel, Morrow is pregnant with twins and nearly every moment of happiness in her daily life comes from this; the smile that involuntarily crosses her face when she feels them move during an interview with a suspect, the automatic cupping of her bump when she thinks of her babies. She is clearly a professional woman who enjoys her job and takes it seriously while being simultaneously occupied with her burgeoning motherhood and wanting to enjoy her pregnancy, something so many women will be able to relate to.

There are those who would argue that the characters are formulaic and dull: the female copper fighting for distinction in a man’s world, the tart with a heart and the wealthy housewife with a penchant for prescription narcotics. In the hands of a lesser writer I concede that this could be an amazingly dull and predictable book, but Mina takes these shop-worn bones and breathes flesh and blood back into them.

It’s clear that her academic background in criminology aids this process immensely; in an interview with The Scotsman in 2009 Mina stated:

So many crime novels finish with the bad guy getting shot without having a trial. That kind of thing makes me so angry. It’s just so wrong. Real life isn’t like that… And that whole idea of criminals not being like us, that’s another one.

This is the key to her writing: it’s about representing a reality. The normality in life and everyone’s susceptibility to make life-altering mistakes in a heartbeat is what makes Mina’s work so compelling; crime and its perpetrators are not clichés. In that same interview, Mina said: “The old good/bad simplicities of crime fiction are irrelevant these days. All that matters is that your characters have depth.” I couldn’t agree more with her.