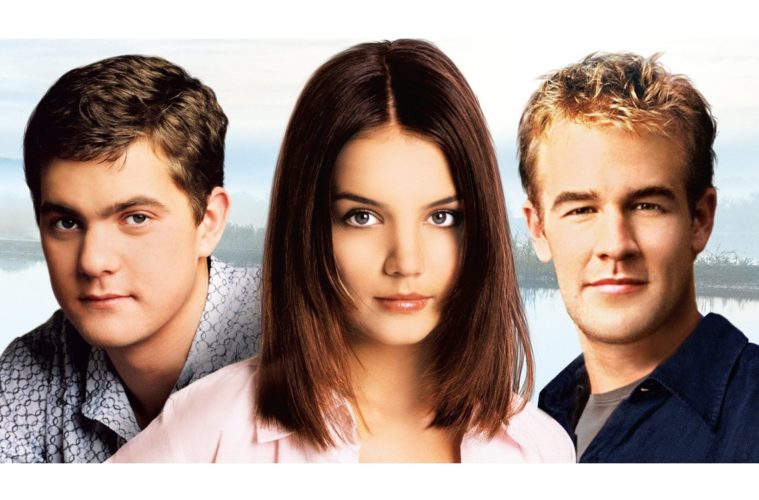 In the opening scene, we meet fifteen-year-olds, Joey Potter (Katie Holmes) and Dawson Leery (James Van Der Beek), who have been best friends for much of their young lives. We learn that Joey has only just realised the whole boys-aren’t-yucky thing at fifteen and worries about hormones complicating her relationship with her best friend. Dawson begs her to stop talking about their “mounting sexual theoretics” (three words I couldn’t have strung together at that age). They sleep next to one another like they always did. But Joey’s restlessness only signals one thing: hormones are about to ruin everything.

I’d like to think that we left the “Can women and men be friends?” question in 1998

Throughout the course of the pilot, their once innocent friendship is put to the test by Dawson’s attraction to Capeside newcomer Jen Lindley (Michelle Williams) and Joey’s struggle to come to terms with her own sexuality and identity as a young woman. And so this episode is jam-packed with problematic tropes around friendships between girls and boys, female jealousy and sexuality.

I’d like to think that we left the “Can women and men be friends?” question in 1998, but it’s one we’re still exploring today. Even though Dawson and Joey come to the conclusion that they’re not attracted to one another at the end of the episode, this becomes a lingering question for them. Dawson’s Creek isn’t the only programme to ram the fall-in-love-with-your-best-friend trope down our throats but it would be nice to see a friendship that doesn’t veer into that territory, ever, for a change.

Ahem. Back to the hormonal creek.

Dawson is an aspiring filmmaker, who ropes his friends Joey and Pacey (Joshua Jackson) into acting in his latest project. Filming, however, is interrupted by the arrival of Jen, and Joey scowls as her two friends trip over themselves to learn more about the beautiful stranger, who has moved to town to tend to tend to her ill grandfather. (Side note: it’s also slightly awkward that she is dropped off from the cab, walks straight towards two gentlemen leering at her, only to suddenly rush back to her grandfather.)

On the surface, there’s the eye-roll-worthy trope of female jealousy. Jen is obviously a threat to Joey when she’s feeling fragile about her evolving relationship with Dawson. But I think that pitting the two young women against each other also makes for interesting commentary about confidence. While Joey seems to be coping with growing up via incredible hostility, Jen is actually one worryingly level-headed teenager, making this, perhaps, less about Dawson and more about having a more comfortable sense of self.

Our next two side stories involving Capeside’s adults are then introduced: Dawson’s highly sexed parents, Gail (Mary-Margaret Humes) and Mitch (John Wesley Shipp), plus a mysterious new teacher who catches the eye of Pacey. Extra credit if you can stomach their first meeting: she walks into the video store where he works and requests The Graduate.

While the young women of Capeside are still in the first stages of discovering their sexualities, the town’s adult women seem to fall into either one of two camps. Tamara Jacobs (Leann Hunley) — who turns out to be Pacey’s high school English teacher — and Dawson’s news anchor mother are painted as being highly sexual. On the other hand, you have Jen’s devout grandmother, Evelyn (Mary Beth Peil), who cannot even utter the word “penis”. Heaven forbid that we ask for adult female characters who fall anywhere in between.

There is one major red flag in this episode, courtesy of the hot-for-teacher storyline. Tamara flirts with Pacey, who eventually confronts his teacher for refusing his advances. She attempts to explain that he had the wrong impression of their conversations about the Summer of ’42 and The Graduate. Pacey then goes on to give a pretty damn disturbing speech:

The truth is that you’re a well put together knockout of a woman who’s feeling a little insecure about hitting forty. So when a young, virile boy, such as myself flirts with you, you enjoy it. You entice it. You fantasize about it – about what it would be like being with that young boy on the verge of manhood. Because it helps you stay feeling attractive. It makes the ageing process a little more bearable. Well let me tell you something. You blew it lady. Because I’m the best sex you’ll never have.

So her refusing him has nothing to do with, y’know, her job, possibly violating a few laws or jeopardizing her entire life. Clearly, this is all about insecurities around age. Right. What’s even worse about this scene is that she kisses him shortly after he delivers these insights. (This is the only way to sum up my reaction.)

We’re still stuck in the same time warp when it comes to female friendships, relationships and the politics of high school

The episode then closes with Dawson and Joey having yet another conversation confirming that their relationship will never be the same again, apparently thanks to Jen “their hormones”.

So what does my feminist self have to say about the show? Dawson’s Creek falls into a lot of the same traps as other teenage shows, but I think that I might have given it a bit of a nostalgia pass. (I binge-watched a couple of episodes while writing this.)

I am not sure what today’s answer to Dawson’s Creek would be. My sense is that we’re still stuck in the same time warp when it comes to representations of female friendships, relationships and the politics of high school. That means television shows like this, despite arguably being a bit of ‘mindless’ and light TV for adults, may have a different meaning for teenagers. And that’s a good reason to rethink how we build the worlds of teenage characters or, at least, make them stories that real-life teenagers can actually relate to.

Have you revisited any programmes recently and found yourself viewing them somewhat differently or with a more feminist lens? If so, see our guidelines for contributing and send us your review!

Sara Yasin is a Palestinian-American writer and journalist. She doesn’t usually watch TV, but when she does, she has a tendency to fall victim to terrible sitcoms of the How I Met Your Mother and New Girl variety