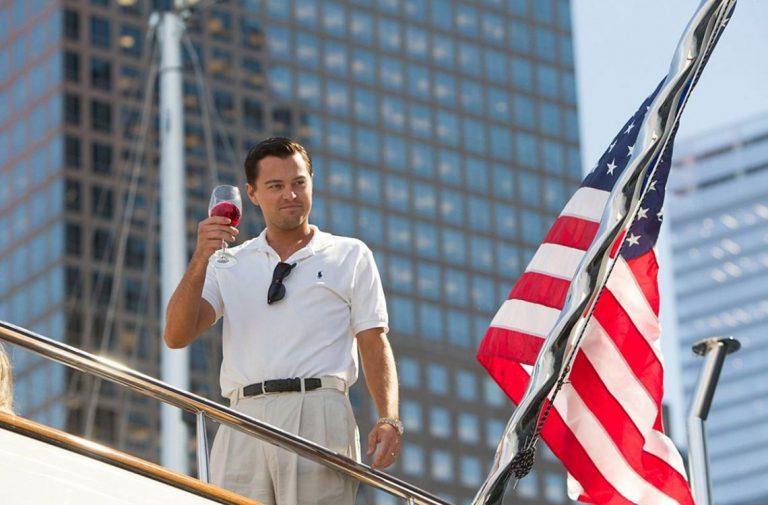 All the naked women of Wall Street

Apparently The Wolf of Wall Street, the latest film by Martin Scorsese, took seven years to create. That’s quite a long time. Worth it though, surely? It was nominated 53 times and won 17 awards. If you ask around, most people liked it: a simple and easy way to tell if a film has been successful.

The Wolf of Wall Street tells the story of the rise and demise of Jordan Belfort (and is based on his memoir of the same title), the infamous co-founder of Stratton Oakmont, a brokerage firm notorious for making millions on selling penny stocks with dubious prospects. The film follows Belfort (Leonardo DiCaprio) and his wingman Donnie (Jonah Hill) as they transform into bona fide businessmen, to whom money is no object. A lot happens and nothing happens: the plot meanders through scenes from the faintly ridiculous to the sincere, the central theme being the pursuit and retention of big money. Belfort replaces his childhood sweetheart with a physically exquisite wife, moves into a mansion, buys a yacht. So far, so predictable. “The year I turned 26, I made 49 million dollars, which really pissed me off because it was three shy of a million a week,” DiCaprio opens the film in his clipped Bronx accent, setting the tone for the wanton excess that is the common thread to this three-hour black comedy.

I watched it myself, in a packed cinema. The acceleration of Belfort’s character from a suited and sober young broker to a selfish and ludicrously successful quasi-mobster millionaire is interesting to watch. It is the expression of the American Dream that intrigues, the golden dollars of capitalism that buy the cars, the drugs and the lifestyle. I too laughed at the part where Belfort slides on his tummy to his car because he is so high, watched the money being thrown around like confetti, heard the sniffing as the cocaine was consumed…

And saw “the girls”. Lots of them. At one point, in a continued prod at humour, Belfort tells his dad (Rob Reiner) that “girls today are all hairless” and we see his father’s wide-eyed expression of disbelief. “All of them?” he gapes, before admitting that he “doesn’t mind” a full bush, prompting titters from the audience. It’s funny, right? This old codger is OK with the bush, he’s of a different era, it’s quirky, it’s funny to hear someone state a preference for hair which is so, well, uncool.

Scene by scene (and there are a lot of them) the naked girl quota increases. It parallels nicely with the money and the general excess: the overarching message being that the more money you have, the more drugs you use, the more girls will like you. It’s like rap lyrics have found their visual expression. Women crammed into every scene, hairless as promised, slender as whippets, having their breasts grabbed at or bodies idly gazed at by the men sitting around in their two thousand dollar suits. And hardly any of them has a voice. The most powerful female voice belongs to Jordan’s trophy wife Naomi (Margot Robbie). I’m not going to explore why that’s a problem.

I know what the counter-argument is here. The film is portraying two seemingly despicable individuals: people who have no moral code, who are substance abusers, who abuse their wives and children. Not exactly pillars of society. But that doesn’t really come off. The dark humour throughout the film keeps it light, there is no sense of a moral retribution, only the pursuit of money. And who doesn’t want to pursue money in this day and age! Especially when fully-waxed girls are involved. The sheer volume of female flesh becomes so constant that it is more noticeable when a scene doesn’t feature a naked woman.

“Girls” are thrown around like discarded shirts, simpering, drinking, dancing, prostituting. Watching it as an enlightened and educated young woman with my boyfriend, I felt second-class as a sex, and there is nothing I hate more.

Sadly, the representation of female nudity as a sexual item to be bought and sold is a disturbing demonstration of the state that the film industry is in. This blog highlights the somewhat depressing statistics: 1/3 of female characters are shown in a sexual manner, 9.4% of men get naked compared to the 26.2% of women. And even then, male nudity is generally depicted in a humorous light (think Jason Segel in Forgetting Sarah Marshall). I have never seen a film where there are hundreds of naked men cavorting aimlessly and women saunter through them grabbing various body parts, all to demonstrate “excess”. I can’t imagine one, and I can’t imagine two main female parts discussing male pubic hair in a lightly humorous way. But hey, it’s only 2014, maybe I’ll come round to it in a few years. Until then, I’d rather watch Despicable Me.

Photo is still from the film, taken from official Facebook page and may be subject to copyright. It shows Leonardo DiCaprio as Jordan Belfort, toasting with glass of red wine while standing on his yacht, with American flag on the right.