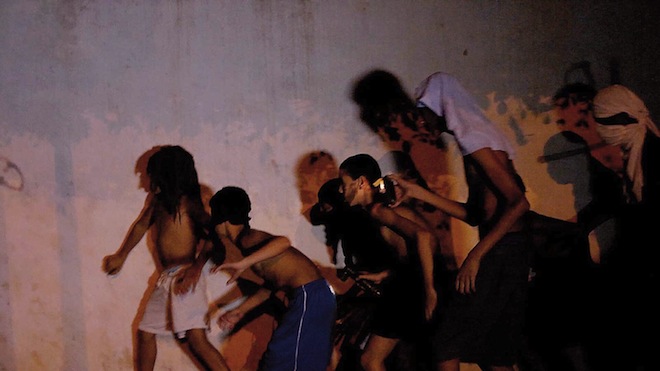 The 2014 edition of Birds Eye View is edgier, more political and more adventurous. Alongside UK’s first screenings of Kelly Reichardt’s dark eco-thriller Night Moves and XXY director Lucia Puenzo’s Wakolda about one of Argentina’s dirtiest secrets, there are dazzling documentaries on show. From the tideline of Algeria’s Mediterranean coast to the sacred Lakota lands known as Pine Ridge, the festival opens a feminist eye for the film lover who wants a strong spine of social justice in her big-screen spectacle.

With Giles Gilles Pontecorvo’s cult radical film The Battle of Algiers (1966) setting the bar high, any new film about the Algerian civil war arrives with high expectations not least for a feminist perspective. Narimane Mari’s highly imaginative re-visioning of the 1960s post-colonial conflict sits politically somewhere between the advocacy of and protest against revolutionary violence. But as a piece of cinema it is radically different in approach from the realist dramas of Pontecorvo and Djamila Sahraoui,whose 2006 Barakat! takes on the Algerian civil war of the 1990s with a Thelma and Louise-style road movie that advocates an end to violence.

Inspired by Jean Vigo’s Zero de conduite (1933) whose portrayal of children as natural revolutionaries was so disturbing to the French authorities that it was banned for nearly four decades, Bloody Beans re-enacts the civil war with a cast predominantly made up of children and, more importantly, following the logic of children’s games.

This works particularly well towards the end of the film, when the revolutionary council debates whether to torture or kill Bernard, the French soldier they have captured. Huddled on rugs on the beach in the hours before dawn, the children debate back and forth, with group leaders Nadjmou and Mucho recommending death and clemency respectively. Their genius solution – to torture the soldier by feeding him the “bloody beans” on which they have been forced to subsist and make him fart as chronically as they do – captures the exact and exacting fairytale logic of children’s justice, especially when it turns out that the hungry, put-upon, drafted soldier enjoys the dish of loubnia in tomato sauce.

This really is a film seen from a child’s eye view, from the languid opening of the children playing on the tideline until one of them, fatefully, farts very loudly

The film addresses the faultlines of gender and class with the same fairytale logic. “We aren’t made for dishwashing,” argues Laila, “You don’t own this war.” The boys’ arguments against the girls, and their determination to shake them off, prove unfounded. Laila in particular proves an excellent strategist and voice of reason as they mask up in a cave system and run through a spooky French Christian cemetery, where the kids say wistfully of a crypt, “What a beautiful room! I could never afford to live there.”

This really is a film seen from a child’s eye view: from the languid opening of the children playing on the tideline (until one of them, fatefully, farts very loudly) through the shadow-fight sequence that portrays the raid on the general’s office and the abduction of Bernard, the film is consistently inventive to serve its storytelling. Drone tracks by cult band Zombie Zombie cleverly add an atmosphere of menace without the on-screen depiction of any violence or threat to the young actors; a climactic bombing by French aircraft is represented through over-exposure, lens flare and powerful sound editing.

Bloody Beans is the story of an intense and formative period in Algerian (and French) history and it’s an intense film to view. Whether the children are shouting “Pigs out! Long live Algeria!” at an elderly white man in a pig mask (one of the film’s most striking images) or singing Egyptian love songs to the Spanish woman, Marcelline, whom he has abused, scenes take their own time, using repetition and duration to follow the contours of child’s play. While making the film must have been anything but, its patience and careful structure offer a genuine sense of the utter originality of young minds, their weapons of natural anarchy and a sense of justice and of total commitment to embodiment and emotion, that is not only compelling but comparable to no other film of recent years. 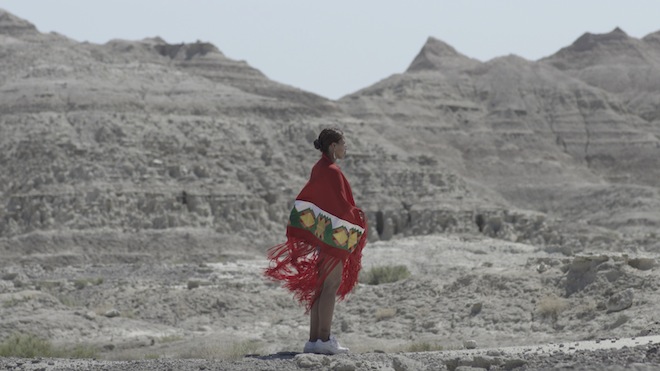 Lakota Sioux blogger Taté Walker captures the current climate for Native American representation in her poem post ‘My Image is Not for Sale’:

I am a modern Lakota winyan.

Because I am not a mascot. Or a blockbuster archetype.

Is trying to sell me my own culture.

“Your values and beliefs are for sale!” he proclaims in redface.

Anna Eborn’s stark documentary, about the legacy of genocide in the Lakota Sioux community of Pine Ridge reservation, comes at a moment of significant protest and debate in indigenous North America, barely reported in the British media. From the Idle No More movement to protests against the continuing use of the name “Redskins” , offensive logo by Washington NFL team and appropriation of tribal names and designs by fashion companies, questions of the representation of Native American identity are being brought into focus.

Representation matters: appropriation of names, designs, and cultural practices is an extension of land expropriation and an intensifier of its wrongs. It’s into this fraught landscape that Anna Eborn’s documentary enters. The Danish filmmaker chose to document the youth of Pine Ridge reservation (aka “the rez”), probably the most loaded location for indigenous rights in contemporary North American history. You might have heard of the case of Leonard Peltier, imprisoned for the alleged murder of two FBI agents during the occupation of Wounded Knee, part of Pine Ridge, in 1973, or know Buffy Sainte-Marie’s song ‘Bury My Heart at Wounded Knee’, which refers to the events of the occupation and its aftermath, including Peltier’s imprisonment, and the murder of AIM activist Annie Mae Aquash.

This history is lightly sketched in through Eborn’s interactions with her subjects. Her final interviewee – few of them give their names, although everyone is named in the end credits – comments that his uncle is in prison charged with the murder of two FBI agents and that his grandmother was an important American Indian Movement (AIM) leader, picking up on our tour of the AIM museum on the reservation earlier in the film. It’s a clever and sensitive scene, as Daniel Runs Close, who acts as the museum guide, attempts to interest white tourists in learning and respecting the site, inviting us to be disappointed in them and be more attentive ourselves. 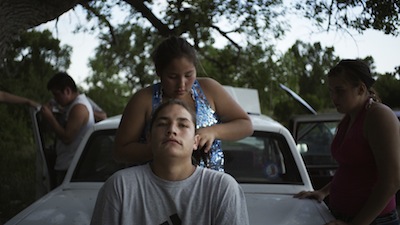 The occupation and its criminal disruption by the FBI is part of the palpable but rarely spoken history that underlines the experiences and articulations of all the speakers. Suicide, attempted and achieved; removal of children to abusive foster parents; imprisonment; poverty; pollution: the stories the subjects tell are almost overwhelmed by the transgenerational effects of trauma. But unlike John Pilger’s recent documentary Utopia, about continuing state assaults on Australian Aboriginal communities, Pine Ridge has no editorial voiceover; its focus is on the voices of its young interlocutors who declare a desire to be psychologists, architects, and rangers and are seen practicing good medicine and community-building amid the legacies of attempted genocide.

Voices – and faces. Eborn offers several lingering medium close-ups of her subjects in profile, offering a representation that is at once a critique of the Redskins logo and awkwardly complicit in its grammar. Seeing these Lakota Sioux youth as individual, living beings, framed against the sacred landscape of Pine Ridge – in one case, wearing a ceremonial fringed shawl; in another, having had his hair braided – is undoubtedly a powerful image of indigenous heritage and continuity and a compelling point of connection for viewers. But these moments – silent, cropped – also reify the subjects.

Pine Ridge gives you hope for the next-gen documentary, made by those young people themselves

Luckily, all of the subjects are stronger than any visual romanticisation. The “noble profile” and all it symbolises compactly and complicitly about tradition, warrior pride and stoic silence is not the only response to the multiple intersecting environmental, economic and social destructions visited on Pine Ridge and their psychological effects. As in the Native hip-hop Eborn smartly drops on the soundtrack, the speakers here are savvy, witty, political, spiritual, powerful and various, and it’s their ways of speaking and moving that shape the film.

Resilience takes different forms for each subject. From shooting bayonet rifles to learning the ropes in prison to swimming in murky outlet water to pow-wow dancing, Eborn doesn’t judge any one strategy morally superior to another. It is most embodied in the care the subjects take of each other, of the community and of their ancestors and the imaginative and impassioned relation to the place that gives the documentary its name. While the film appears to end on a bleak note, with Peltier’s nephew saying he can’t settle anywhere and has no dreams (even as he capably recycles and fixes engine parts), the credits are intercut with scenes of the rez’s next generation playing. Finally, a kid biking along a dirt road disrupts the “noble profile” shot by turning to the camera and grinning. As Taté Walker says, these kids are “like no Indian you’ve ever seen” in the media, and Pine Ridge gives you hope for the next-gen documentary made by those young people themselves.

All pictures courtesy of BEV. First image is a still from Bloody Beans, second and third are stills from Pine Ridge.