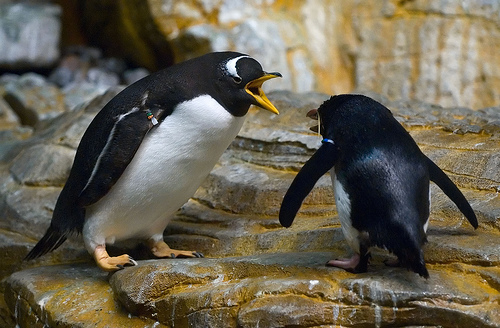 “No answers? No point”: Solutions as silencing tactic

Along with the opportunity to talk frankly about my sex life, one of the advantages this pen-name affords is the opportunity to respond to conflict I’ve slunk away from in real life. In person I can come across as brash, but I’m actually very thin-skinned; I feel an obligation to participate in discussions on the side of social justice when I see them, but when they sour (as they almost inevitably do), I dread checking my Facebook, shake with anger, sometimes even cry in sheer frustration. This is usually in response to the other person deploying silencing tactics designed to be impossible to counter because they’re based on fallacy.

Today I want to talk about a silencing tactic that has been annoying the hell out of me: dismissing an entire piece written on a problem because the author does not also suggest solutions.

The Geek Feminism Wiki covers a version of it they call “free sexism consulting“:

Asking for free sexism consulting is a common response to claims of sexism or concerns for women in a relatively organised group (like an event or a forum). The complainant is asked to volunteer to either give advice on what to do, or to actually implement this advice.

This can be a variety of silencing: don’t complain unless you offer free sexism consulting.

This is difficult enough in a group situation where it can be hard to push back without risking damaging the relationships you’ve built or the objectives you want to achieve. However, the derivative I’ve noticed – and I’m sure many of you have too – is people using it in comment threads as justification for ignoring the rest of an article and shutting down conversations that have sprung from it.

“She made some interesting points, but undermines them by not suggesting what we can do about them.”

“Unless she also comes up with ideas to fix this it’s not constructive, just complaining.”

“I stopped reading as soon as I realised she was just ranting, not offering any advice that might actually help.”

You might recognise this approach as related to such derailment tactics as “You’re Arguing With Opinions, Not Fact“, “You’ve Lost Your Temper So I Don’t Have To Listen To You Anymore” and “If You Cared About These Matters You’d Be Willing To Educate Me“. It’s a fine foundation for that old favourite: “You’re Being Hostile“.

Damn right I’m being hostile. Your argument is ridiculous. The presence or absence of a proposed solution does not determine whether or not a piece is worthwhile. How is that not obvious?

That it’s not obvious proves my point: problems need to be identified before they can be addressed. I don’t just mean identified like “This happens” or “This is bad”, though those are essential steps, but identified like “This is a problem I am willing to channel money and resources into fixing” by people with the power to make that happen. As “Professional Fun-Ruiner” (I seriously wish I’d thought of that first) Miri puts it:

Sometimes the immediate step isn’t “solve the problem,” but “get people to agree that a problem exists,” and then “show people how the problem impacts others.” Trying to skip one of these steps is like trying to, say, plan a renovation for a building without first taking note of what’s wrong with the building currently, or even getting anyone else to agree that a renovation is needed.

For example, in this article I would like to get people to agree that demanding solutions be presented in every discussion of oppression is a problem. I would also like to show people how the problem has an impact on others, by shutting down conversation between the people with the most experience of the problem and the people with the influence and/or resources to fix it. That’s the problem I have identified in this post. It happens. It is bad. And to fix it takes no money or resources – just the genuine wish to support women and not be That Guy.

(Quick caveat at this point: I’ve framed this in reference to sexism because this is a feminist website and women are a majority group, but I just want to take a moment to check my privilege here and invite you to do the same. Feminists who are also part of a dominant group must be careful in how we support those discussing their own oppression and, no less importantly, how we respond to people pointing out we screwed up. Good intentions do not mitigate, undo or excuse harmful actions.)

Since including more specific advice actually would undermine the rest of this piece, I’m going to wind down here. Some people reading will now be better able to recognise this in their own behaviour or the behaviour of others. They will have a link to direct offenders to if they can’t or don’t want to have this discussion themselves. Commenters may offer up their own tips below the line on how to address and/or avoid this tactic. Who knows, maybe even offenders who encounter this piece will reflect upon their actions and mend their ways in future? To say that identifying a problem is not a productive contribution to a conversation or does not lead to solutions is just incorrect and illogical, despite being dressed up as a rational smackdown of all the emotional ladies ranting into thin air.

…Still want to criticise me for not giving you answers? Fine – I’ve got your answer right here. Next time you’re tempted to inform someone why not including actionable recommendations renders everything else they have written meaningless, use this instead. You’re welcome.

[The image is of two penguins arguing, the bigger one with its beak wide open shouting down the smaller one. Image by Adam Arroyo, shared under a Creative Commons licence.]