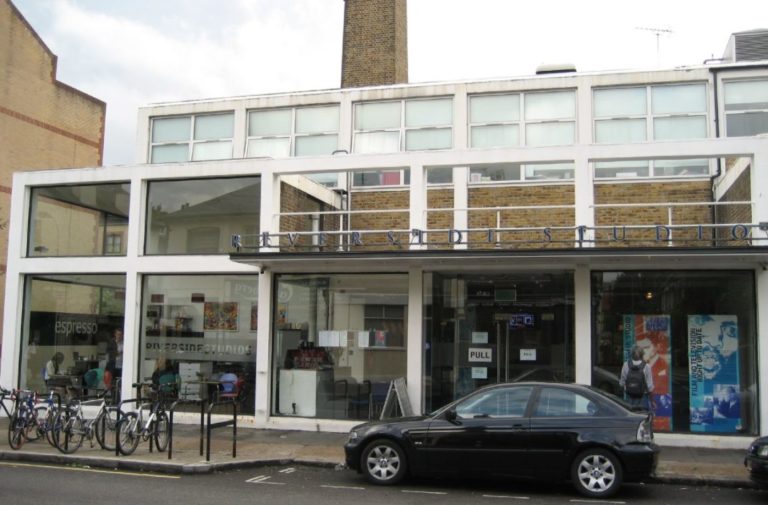 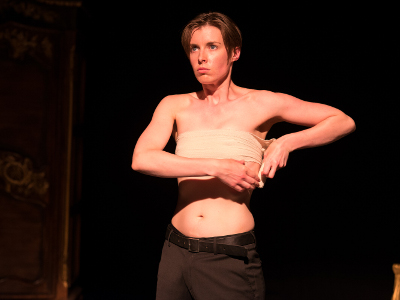 Perhaps the most startling thing about this smart, rich, affecting and brave story is that, as announced prior to the Tuesday night performance, the actors had a mere three days to rehearse. The script is a striking and difficult one; for the two actors, Anne Zander and Bonnie Adair, to come to grips with the material and go on to deliver such strong performances in this short space of time is impressive. The director, Roz Hopkinson, is to be applauded for drawing such a solid piece of theatre together with her team so quickly and assuredly.

The play is a two-hander that follows the story of Laurie becoming Laurence (Zander), as told through the eyes of a high school friend (Adair, referred to in the programme only as ‘La Femme’) and merged with scenes from Shakespeare’s Richard III. This is interspersed with some music and movement driven segments. It’s an ambitious story, covering not just the transition narrative but also the story of a close friendship as it evolves over time within the political and social context of a queer-unfriendly early-1990s USA. The protagonist goes through youth identifying as a lesbian and then later identifies as a straight man. (I refer to Laurie using female pronouns and Laurence using male pronouns throughout this piece to match the narrative and the character’s own self-identification.)

La Femme introduces us to the narrative of Laurie/Laurence and their friendship, beginning as lesbians in high school in a very conservative Texas town and evolving as they grow up. The story comes to the point where, after varying degrees of simply trying to find her place in the world, Laurie/Laurence decides on a surgical and hormonal physical transition. La Femme is distraught by his choice, and examines her discomfort through reviewing the history of their friendship, how it would change their relationship and addressing her own thoughts on and choices of gender performance.

It is a fight to hold on to a sense of self against harsh internalised prejudices: “What do I fear? Myself?”

The movement based scenes, relying heavily on light and sound design and Zander’s ability to rivet the attention of her audience, put the focus firmly on the physical, serving as a reminder of the importance of the body as a house for the soul and the landscape on which Laurie’s battle is fought. The scenes don’t fit in quite as snugly with the rest of the play, feeling somewhat abrupt and at times provoking a sense of unease – the audience isn’t entirely sure what is expected of them in response – but within the context of the play as a whole, the feeling of being put off balance is apt.

The Richard III scenes draw the audience more directly into Laurence’s experience; the linking of one transgender person’s perspective to the intense battle between self-loathing and self-love (the feeling of being in a battle against the world that infuses Shakespeare’s Richard) is frankly brilliant.

Shakespeare’s Richard is nonetheless a villain and, as with all of his characters, a complicated one; while powerful and charismatic, his decisive cruelty renders sympathy towards him virtually impossible. However, Laurence-as-Richard is heartbreaking. Consider the opening monologue of Richard III:

I, that am curtail’d of this fair proportion

Cheated of feature by dissembling nature

Deformed, unfinish’d, sent before my time

Into this breathing world, scarce half made up

In Laurie/Laurence’s hands, this seems to be speaking of someone who feels alienated by their own body and despised by a callous world.

Later scenes include Richard’s wooing of Lady Anne, the widowed wife of a man he has killed, while in the presence of the newly dead corpse of her husband. The author of the play is drawing parallels between this scene, which in Shakespeare is morally outrageous, and the idea of seduction by a trans person, which was deemed as reprehensible during the time the play is set and unfortunately still is in some circles, even now. This is not a view held by the author but, rather, a way of pointing out the extremity of anti-trans feelings.

We also see Richard’s confrontation with his mother excruciatingly linked to the total rejection of Laurence by his parents, with the Duchess of York’s revulsion at her son becoming suddenly unbearably cruel. Here, the pain of being seen as a monster by your own mother because of who you are is brought sharply into focus; the author is not drawing a comparison of moral equivalency, but comparing the extremity of the emotion of rejection, which is intensely effective. It is this which complicates and somewhat inverts the scene, making the audience sympathise with Laurence and thereby Richard.

By drawing the parallels in these scenes, the author is using the intensity of feeling and drama of Shakespeare’s Richard III to underscore the violence of such views towards trans people, from potential romantic partners, family members and society, noting how they can sometimes be internalised and processed by trans people themselves. It also has the added effect of complicating the viewer’s interpretation of Shakespeare’s Richard, by raising questions about how and why he acts as he does, and how that might be related to the feelings and behaviours of others around him and his personal history.

Perhaps the most stunning aspect of the performance is Laurence-as-Richard’s lines from the end of the play, one of Shakespeare’s early ventures into a kind of stream-of-consciousness monologue. Richard argues with himself, hating himself and yet demanding that he must love himself, fighting with the voices in his head to hold himself together. In straight (no pun intended) Shakespeare, this reveals that Richard does judge his own actions, does have a conscience to be struggled with and is capable of feeling the weight of his actions. Here, it is a fight to hold on to a sense of self against harsh internalized prejudices: “What do I fear? Myself?”

This is one of those plays that, despite its imperfections, stays with you

A familiarity with Richard III is an advantage when viewing this play, but this is not necessary to feel the emotional impact of the piece. The brilliant thing about these scripted connections is they draw out the universality of the feelings, even when trans experiences are not shared by all. Who hasn’t felt unlovable, angry with their body for its apparent ‘wrongness’ or struggled to accept themselves?

Of course, all of these big ideas would fall flat without the skill of the performers. Zandar is engrossing. Her physical embodiment of Laurence is aggressive and fearless, her emotional presentation sharp and intense. Adair is relaxed and easy in her character and very adept at creating clear, whole and distinct people when playing the other characters (her Duchess of York was particularly impressive) or creating brief cameos fleshing out elements of Laurie/Laurence’s narrative.

What I think and feel about this play is still evolving. Indeed, there are so many other things about it that I could discuss due to it being so suffused with emotion and ideas, making it very effective at provoking a personal response. A thoughtful message-driven piece, devoid of the shortcuts and tropes one becomes accustomed to seeing, this is one of those plays that stays with you, despite its imperfections. After seeing it, I have a deeper and more emotional connection to the idea and experience of being transgender. I will certainly never see Richard III in the same way again – I have a new way of understanding the characters and the defiance, aggression and alienation that Shakespeare presents. Overall, this is smart, brave theatre doing what theatre is meant to do.

The feature image is of the old Riverside Studios. It is by Betsy & Ian F-R on Flickr and is used under a Creative Commons licence. It is an ex-industrial building with big glass windows.

The photo in the text was taken by Jamie Scott-Smith and is used with permission. It shows Anne Zander as Lawrence, looking resolutely forward as he wraps bandages around his chest. He wears grey trousers with a black belt. The background is dark, with an indistinct piece of wooden furniture (possibly a wardrobe) half in shot.