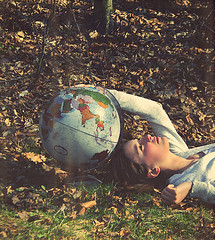 Nat Newman is our November guest blogger. She is planning to write a series of posts about women expats. This is her first post.

I’m an Australian woman living in Croatia. I’m only 35, but this is the 5th country that I’ve lived in. I’m not a “3rd culture kid” – I didn’t move around much growing up. These are all countries I’ve chosen to live in as an adult, for various reasons.

I am one of more than 200 million people living as an expat.

The term ‘expat’ is hard to define, but for the purposes of my upcoming posts, I’ll say that it loosely includes all those people who are living, working or studying in a country which they do not consider their ‘home’ country. They may be staying there for a short time, a long time or even forever. They may be there for work, for love, for study or for adventure. Often, it’s a combination of all of these things. Usually, being an ‘expat’ is different from being a ‘refugee’ or a ‘migrant’. As I say, it’s hard to define. But if the expat community were a country, it would be ten times the size of Australia.

It may surprise you to learn that the largest group of expatriates from an OECD country comes from the UK. More than 3 million British citizens are choosing to live away from home and every year the number is increasing. The vast majority of these expats are men – who often bring along their ‘trailing spouse’ and family.

That phrase sounds awful, doesn’t it? ‘Trailing spouse’ – like you’re being dragged, against your will, by your hair, across the seas and dumped into strange lands. Of course, that’s not the general experience. For a lot of women (trailing spouses are, on the whole, women) they are very much part of the decision making experience. The family or partnership decide together that they will make a life for themselves abroad. Take for example Farrah Gilliani. Farrah and her husband lived in Sweden for a number of years, but now live in Luxembourg, where her husband works in engineering. She always knew, before she set out on her expat adventure with her then-partner (now husband), that they definitely wanted to live abroad. It was just a case of who got a job first. It was him, so they wound up in Sweden.

Women who move abroad because of their husbands or partners can sometimes feel as though old gender roles are still in place. Their opportunities to work are limited – and in fact, very often, they’re not expected to work at all. Of course this can be challenging – but it can also be very rewarding. When you’re the ‘trailing’ partner, there’s less pressure on you to work. There’s no guilt associated with staying at home to look after your home and family. In fact, quite the opposite. You can enjoy being a mother and take pride in your work as a home maker without feeling any guilt or need to apologise.

As you can guess, though, there’s a certain level of isolation as an expat. It can be hard to make friends. The pool of people from whom you can choose becomes constricted – what are your chances of finding a great friend when there are only 30 people you can communicate with? You make connections where you can – with other mothers, fellow Britons, a book club. You do anything you can to make yourself a safe place, a place you can feel at home. Often, the easiest thing is make yourself a home at home. Socialising can be too hard in a foreign place. It’s hard enough back in the UK!

Over the coming posts, you’ll meet some amazing women living all over the world. From raising kids in Sweden to being shot in the Dominican Republic, returning to the homeland of your parents, helping refugees or spending Sundays on the streets of Bogota. These are women who’ve moved with their partners, women who’ve moved for work, women who’ve moved because they couldn’t stay still.

What they all have in common is the desire to do something. Whether that’s volunteering or setting up a magazine, they all need to be doing. I guess we all feel like that. Perhaps there’s something about moving to a new land that makes it clear that you can and will contribute to your greater community in some way. Because all of these women are making projects for themselves, contributing in substantial ways to their new communities, building strong international ties and being great ambassadors. That’s the thing about being an expat – at some point, someone will think of you as a representative of your home country, even if you don’t feel like it!

I hope you enjoy meeting these sensational women who’ve chosen to make another country home. Bok i živjeli!

The above photo illustrates a woman lying outside on her back. Above her head is a globe and she is touching it with her hand. Thanks martinak15 for the photo!