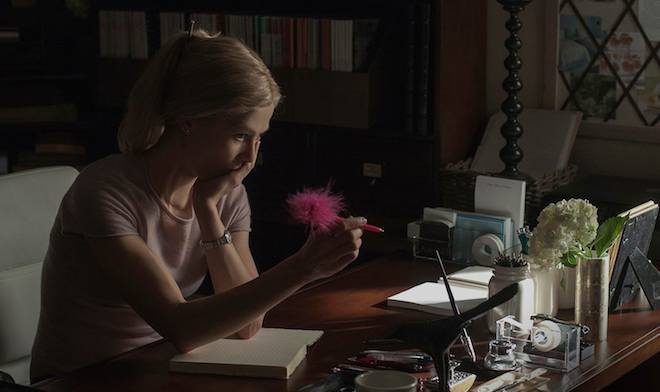 This review contains spoilers. Do not read further if you haven’t seen the film or read the book.

There’s been a spate of articles discussing whether or not Gone Girl, starring Rosamund Pike and Ben Affleck as married couple Amy and Nick Dunne, is misogynistic. Sharing the fate of most articles mentioning “feminism” in mainstream media outlets, they’ve met with verbal snorts of derision in their Comments sections.

While I don’t think calling the film misogynistic is particularly helpful – it’s far more complicated than that – to ignore the ways in which gender is represented is to miss a significant part of the film. Any film in which a lawyer introduces themselves as the “patron saint of wife killers” should expect to be quizzed on its gender politics.

David Fincher himself said in an interview:

“I can’t wait to see what will go on between couples at dinner after they see it. There are so many interesting tectonic shifts in the movie. There’s the moment where Andie [Emily Ratajkowski, who plays Nick’s student and lover] comes into it, and you watch the sexual dividing line in the audience. I’ve shown this movie to people and when they come out of it, they are either Team Amy or Team Nick. Team Amy doesn’t have a single quibble about her behavior, and Team Nick doesn’t have any problems with his”

Fincher’s statement is obviously problematic: why should anyone hold a default position depending on their gender? He seems to believe that when Andie (a young woman with whom Nick is cheating on his wife) enters the equation, the women of the audience will automatically sympathise with his wife’s desire for revenge and the men will automatically sympathise with Nick as the poor schmuck who’s fallen for his busty student.

Cinema could do with more unpalatable women

I find Fincher’s comment irritating in the extreme and wonder whether it is also indicative of what follows in the movie. Fincher seems to have a pretty defined idea about how people of different (binary) genders perceive the film – do his characters also sit within these proscribed roles? I’ll be weighing up some key criticisms and compliments the film has received from the online feminist community to find out.

Amy Dunne is an interesting character, and not just a ‘strong’ one. As Laurie Penny has excellently pointed out, ‘strong’ female characters are ‘spunky’ and ‘feisty’ – they’re rarely flawed and interesting.

In Amy we finally get a complex female ‘bad guy’. As Rosamund Pike herself said: “For me it was just a joy to play a woman who doesn’t have to be palatable all of the time”. Cinema could do with more unpalatable women. It’s high time we had more female antiheroes.

However, it’s not enough simply to behave like the ‘bad guy’. We need to think about why Amy acts as she does.

Amy is apparently motivated by the need to keep her relationship ‘fresh’. Nick and Amy, like most of us, show their best selves when they meet for the first time. Marriage wears down the act. Amy apparently acts out of frustration that her relationship no longer looks the way it did when she first met Nick.

Perhaps, then, the film is about unattainable standards, particularly those up to which women are expected to live. Amy has always measured her successes against those of her animated counterpart, Amazing Amy, the character in her mum’s famous children’s books. She’s so busy trying to maintain the image of the perfect wife that she loses sight of who she actually is. Perversely, the time she seems most herself is when she’s in hiding pretending to be someone else.

On the other hand, it could be argued that it’s not particularly ‘feminist’ to root a female character’s motivations solely in neurotic obsessions over her relationship. But it could also be argued that Gone Girl is a comment on the perils of holding relationships up to unattainable, rom-com style standards. 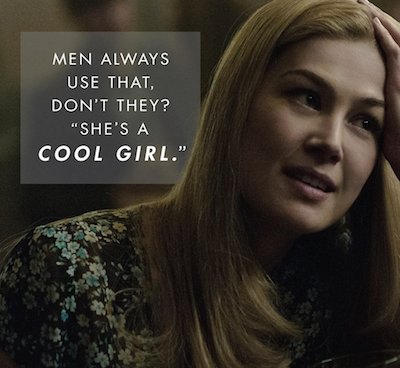 When Amy leaves framing Nick for her murder, she talks not of her desire for him to be perfect, but of the disproportionate pressure on her, as the woman, to remain not just perfect, but effortlessly so. She engages directly with the trope of the “cool girl”: the girl who’s “one of the guys”, never gets angry, never nags, somehow always looks hot.

Her motivation might be rooted in her relationship, but it’s also rooted in her rebellion against the bored nagging wife that Nick has made her become, and in her dissatisfaction with her lot.

She’s got a troubled (and troubling) past

It’s not just Nick’s behaviour that Amy ‘punishes’. Amy, apparently, punishes all the men in her life who don’t live up to her expectations. When trying to prove his innocence in Amy’s murder, Nick visits two of her ex-boyfriends whom she’s apparently falsely accused of stalking and rape.

This is where the film takes a particularly uncomfortable turn. As much as the film up to this point plays with expectations surrounding gender roles, the back-story painting Amy as the stereotypical “psychotic bitch” is dispiritingly familiar. Amy’s ex-boyfriend, whom she accused of rape, details the ways in which she framed him for the crime. Sitting in the cinema listening to a man accuse a woman of making false rape claims did not feel subversive. It felt like reading the Comments section on an article about Ched Evans.

As the film progresses, Amy becomes the perennial bogey-woman of the patriarchal imagination: the “callous, calculating bitch” who seduces men and destroys their reputations by “crying rape”, then uses her “feminine wiles” and crocodile tears to escape detection.

That is why some have dismissed the film as misogynistic. Amy’s accusations of domestic violence, rape, stalking – crimes overwhelmingly committed by men against women – turn out to be nothing more than tall tales, reinforcing the damaging narrative of “the poor innocent men framed by a cold-hearted bitch”.

Who gets the last laugh?

To return to Fincher’s words – was I Team Amy? I certainly started rooting for her from the moment the film switched perspectives in the beginning of the second part, showing her driving away in the car, freeing herself from an unhappy marriage and getting revenge on her dull philandering husband. Who wouldn’t empathise a bit with a woman who had felt compelled to watch Adam Sandler movies and ape a frat boy sense of humour?

At the end of the movie, Amy appears the dominant of the two. Nick is terrified of her, and apparently trapped in the relationship. Nevertheless, it’s unclear whether we should feel sympathy for him and hatred for her, or vice versa. When Nick forces her against the wall and calls her a “fucking cunt”, are we behind him? Is the film behind him?

It’s the impossibility to answer the last question that relieves the film of the claims against it. If we can’t tell which team the film is on, we can’t call it misogynistic or feminist. 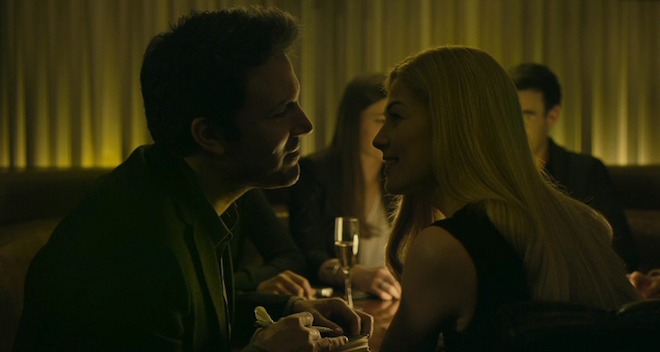 Ultimately, though, it comes down to the social context in which the film has been made and received. If we lived in a feminist utopia, where all audiences would pick up on the undercurrents of its gender politics, we all could watch the film without any qualms. Sadly, we live in a world where the overwhelming majority of women who are raped do not report it, citing fear of disbelief as their main reason. We live in a world where domestic violence is still not taken seriously enough by the criminal justice system. Society still fails to acknowledge the magnitude of the problem.

Reflect this in the world of the film, and put into this world a cold, devious woman who will scheme and plot her way across the screen making false rape and domestic violence allegations, and you risk further cementing these societal myths and reinforcing the position of those audience members who already hold troubling views about women. There are far too many men out there who see nothing wrong with holding a woman against a wall and calling her a “fucking cunt”.

Until we live in a world where everyone appreciates the nuances of the film’s gender politics, I don’t think we can call this a feminist film. It’s just too ambiguous. And with so many members of Team Nick in the world, we can’t afford ambiguity.