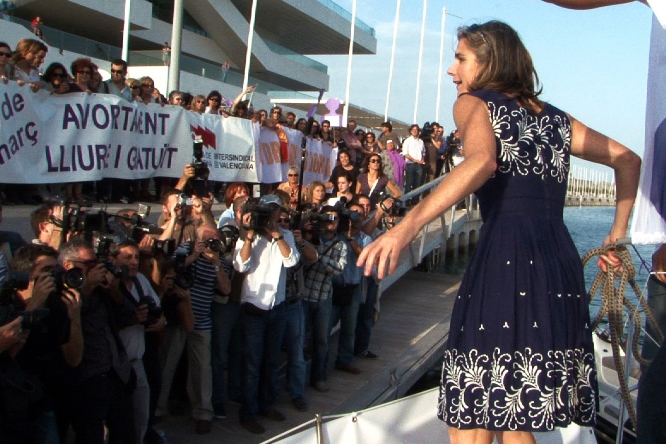 The 2014 Leeds International Film Festival chose Diana Whitten’s Vessel as one of its documentary screenings this year. Organisation Women on Waves was founded in 1999 by Dutch doctor Rebecca Gomperts to provide access to safe abortion for women in countries where the procedure is illegal, by means of a ship with a customised clinic. Whitten was following Women on Waves from its conception right through to the ship’s 2012 Moroccan campaign.

The film opens with the said campaign, showing Dr. Gomperts and her colleagues facing the press and an angrily vociferous, mostly male crowd of demonstrators. In fact, based on the coverage of all the ship’s landings, the vast majority of the anti-abortion lobby appears to be male. Perhaps the central question the film asks is: why is it so threatening when women take control over their own bodies?

Much of the film’s focus, as well as on Gomperts herself, is on the legal battles fought by the group in the various countries they visit. In the light of the law, once in international waters (at least 12 miles off the coast) the ship is covered by Dutch legislation, where abortion is legal. The provision of the medicine used to induce it, Misoprostol, is not regulated for use up to six and a half weeks of pregnancy. Even though a custom-built clinic aboard meets all necessary regulations, the licence is not necessary to dispense Misoprostol for women’s own use at home.

The film illustrates clearly that abortion laws in themselves do not prevent abortions; they only prevent safe abortions

However, on the ship’s maiden voyage to Ireland in 2001, the press focussed on the fact that the boat’s clinic did not have the requisite licence to perform abortions. The group was criticized roundly from all sides: anti-abortion campaigners seized on it as further proof of the group’s “immoral” mission while pro-choice campaigners criticized them for giving hope to women and then, in the event, being unable to assist. As a result, there was so much uncertainty around legal issues that no medication was dispensed and Gomperts and her team were forced to issue a statement to that effect.

During the film, Gomperts comes under fire from the press several times and the worst instance of this is probably a journalist asking her whether she has had an abortion herself and if this is why she has embarked on this course. The Irish campaign is not a good start, and we see Gomperts visibly distressed and passionately angry after confronting a hostile media mob. Whitten allows us to see just how much Gomperts cares about her vocation and the women she wants to help who, as we learn from the excerpts from their emails, have nowhere else to turn to. For some, Women on Waves is their only lifeline, the only thing standing between them and either an illegal backstreet abortion or a lifetime of shame and ostracisation or even death: an Iraqi woman contacts the group telling them she risks being stoned to death. The film illustrates clearly that abortion laws in themselves do not prevent abortions; they only prevent safe abortions.

Whitten intersperses the real-life footage with animations illustrating how Misoprostol works to induce abortion and what women might expect when they use the drug. The animations, with their quirky line drawings and bright colours, reminded me of some of the adverts I used to see in the early 1990s in the student union at the university my parents used to work at, for family planning clinics and women’s health services. I first learned the word “contraception” from a sticker on the back of a toilet door in the ladies’ room in the student union of Exeter University. I later looked it up in my parents’ Oxford English Dictionary and I remember it dawning on me, at the age of ten or so, that pregnancy and childbirth were not inevitable, which in some ways changed the way I felt about being a girl. I knew from then on that if I didn’t want to be a mother, I didn’t have to be.

Remembering those furtive toilet door stickers with their smiling abstract faces brought it home to me how important and powerful information is. This is a message Whitten brings out in the film to great effect, alongside showcasing the important role of local women’s rights groups and activists, without whom Women on Waves would never have been able to help so many. 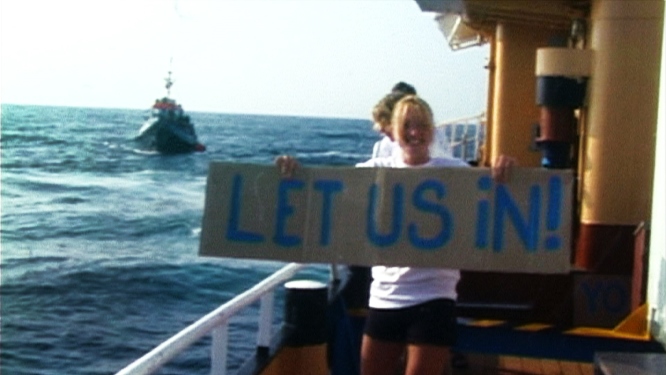 A turning point for the group comes in 2004, at the height of the controversy over the ship not being permitted to enter Portuguese waters for their third campaign. The brave and incredibly risky decision by Gomperts to disclose how to use Misoprostol to induce abortion on a Portuguese TV show boosts confidence of local women’s groups to start to disseminate this information themselves. Women on Waves starts to mature as a result, starting to support local initiatives, empowering women to inform and help within their communities.

Impending motherhood makes Gomperts, in some ways, less threatening to the media as she appears with her infant in several scenes

Misoprostol abortions are by no means 100% effective (the film quotes an 80% success rate) but there is no way for a medical practitioner to tell whether the drug has been used to induce miscarriage or not, thereby sheltering women from negative consequences if they do need to seek medical help. Whitten highlights effectively just how much bolder and more subversive the movement becomes during the years of coverage – giving women the means and a method that hoodwinks the medical establishment. Although many countries have now banned the sale of the drug, the Internet makes it possible to obtain it without a woman needing to ever face a pharmacist or doctor. Sister organisation Women on Web is set up in response to this growing need and gets some coverage in the film, notably with a poignant exchange between Women on Web e-helpline staff and a Kenyan service user. 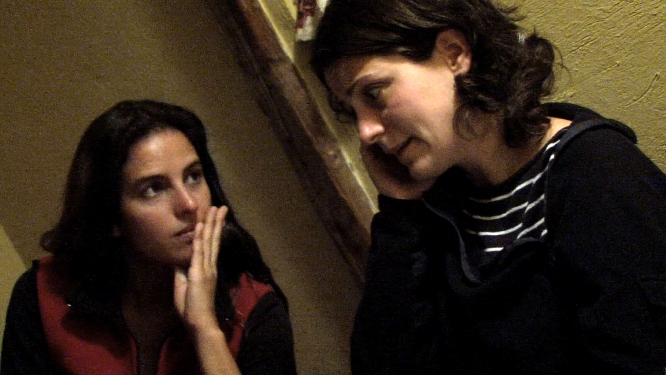 Gomperts herself is pregnant at the time of the Portuguese interview, which is another turning point, where she begins to be more comfortable with allowing the personal into the political space. Being pregnant and campaigning for safe abortion might be for some a glaring contradiction, but impending motherhood makes Gomperts, in some ways, less threatening to the media as she appears with her infant in several scenes. I wonder whether she might have received different treatment if she had been open about choosing not to have children. Earlier in the film, Gomperts is not open about having had an abortion herself, and she chooses only to reveal this after she has chosen to become a mother.

As a woman who has chosen not to have children at all, I have an issue with the fact of being frequently left out of the abortion debate, something this film perpetuates too. Society seems to have less of a problem with abortion as an enabler for a woman to choose when she becomes a mother, rather than if she becomes a mother at all.

Vessel showed me that I have been both privileged and sheltered, never having had to fight for the right of self-determination over my own body and reproductive choices

I would have liked to hear more stories of other Women on Waves activists as Dr Gomperts is the only one whose story we really get to know in any depth and the film becomes a little repetitive by the time the 2008 campaign in Spain is covered. However, this repetitiveness emphasises how women all over the world face the same barriers, the same arguments against them having agency over their own bodies. Against such forceful opposition, where the ‘moral majority’ would rather have women dying from botched backstreet abortions than give them the choice of a safe and legal one, it is easy to see why women are prepared to circumvent the law to exercise such agency. I would also have liked to hear more than vignettes offered throughout from women who benefited from the services offered, to understand more about the real human impact as the audience sometimes lose sight of the longer-term goals and results.

Vessel serves as a timely reminder that even in countries where a progressive and more liberal attitude is the norm, women cannot afford to take their right to choose for granted. Women on Web has started to receive more and more enquiries from women in the USA where, even though abortion is legal, poor women are being priced out of choice and the fingers of the religious right start reaching further and further into the private lives of citizens in some states, despite their professed hatred for “nanny statism”. Most health insurance companies will not cover abortion and some corporate insurance schemes are now even declining to cover contraception on the grounds of the religious views of the owners and managers, as in the recent case of Hobby Lobby.

Vessel is a must-see documentary. As a British feminist, having grown up in a country where abortion is legal and accepted, I realised that I have been both privileged and sheltered, never having had to fight for the right of self-determination over my own body and reproductive choices. I hope the more women see the film, the more women will throw off the mantle of complacency and become active in promoting reproductive rights.

Vessel – Trailer from FilmBuff on Vimeo.

To find out how you can start supporting women worldwide to access safe abortion, go to Women on Waves website.

All pictures are from the film’s website’s press section.

First picture is of Rebecca Gomperts landing the ship in Valencia, Spain. She is wearing a navy blue dress and motions enthusiastically towards the press awaiting on the shore.

Second picture is of the ship awaiting entry to Portugal, with two activists holding up a banner with words “Let us in” in blue.

Third picture is of activists Cecilia and Paula answering the hotline.

Liz Smith is a British feminist living in Leeds with her partner and extremely pampered dog. When not reading, watching films or writing, she is usually found in the kitchen experimenting with gluten free cake recipes. Check out her gluten free food blog (below) or find Liz on Twitter as @glutendodger