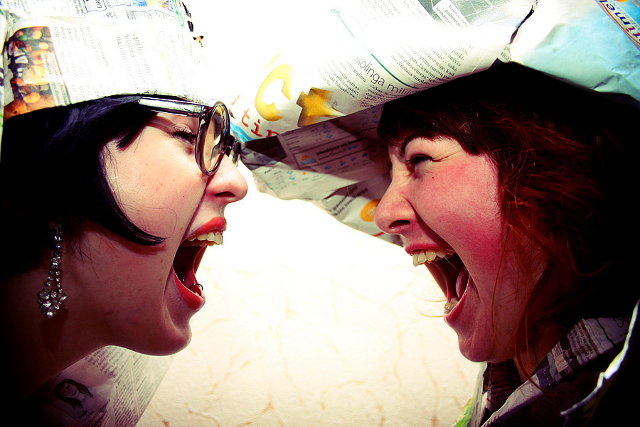 Page 3 debates: no room for nuances?

It was confirmed last week that Page 3 as-we-know-it hadn’t ended at The Sun after all. I strongly suspect I am not the only feminist for whom this will mean very little. The Sun was sexist when it included pictures of topless models, remained sexist when they briefly went away and I expect it will continue to do its usual sexist thing now that those pictures are back. However, one thing this turn of events probably does mean is that the mainstream media will continue to host polarised debates about Page 3, where feminists will still be assumed to be involved in the campaigns against it, regardless of our campaigning backgrounds and what we actually say.

So when I received a call from BBC Radio Somerset last week regarding taking part in such a debate, I made sure my views were clear; I said that, yes, I think Page 3 is out-of-date but, ultimately, the bigoted commentary typical of The Sun is far worse. I also mentioned that I have not been involved in any of the recent campaigns against Page 3 and actually thought at least one of them was really dreadful. I was told this view was still of interest and there would be a few different voices in the mix.

Despite this, there were several tweets from the presenter that evening that indicated there would be just two of us and we received the following introduction on the show the next morning (02.10):

…We’re going to hear the debate from both sides. We’re going to hear from a Page 3 model — a glamour model — who says the campaign against [Page 3] is annoying and she wants to openly and freely express her sexuality. We’ll also hear from a writer and feminist who says she’s happy to see it go because she thinks it’s outdated and it objectifies women. [My emphasis.]

I appreciate that radio researchers, producers and presenters are under pressure to host juicy debates with clearly divided opponents, but surely caricaturing contributors regardless of what we actually have to say shouldn’t be necessary? More to the point, this tendency seems to lead to a significant strand of intersectional feminist thought going unrecognised. Indeed, after I had clarified my position, the presenter, Ben McGrail, seemed bemused when introducing caller, Gwyneth (19.34):

I’ve got in my notes here about you: you’re a self-proclaimed feminist. [answers yes] I got that one right then! Now, I’m going to take a wild sweeping assumption here: you’re not a massive fan of Page 3…

Once bitten, twice shy, I guess. Also, to be fair, Gwyneth agreed that no, she wasn’t. But it isn’t as if my position is even that unusual. Plenty of other feminists have expressed opposition to or at least ambivalence towards campaigns against Page 3. It is also hardly ludicrous to point out that candid shots (celebrities being photographed on the beach etc without clear consent) and patronising blurb along the lines of News in Briefs (which thankfully ended in 2013) are far more problematic than including a topless picture that a model openly posed for.

The bemusement I observed seems to sit alongside the dismissive reaction that former Playboy bunny Samantha Rea got from her boss when it became apparent she was against Page 3. Personally, I’m not really down with the quickfire ‘family newspaper’ angle per se, as I think it tends to lead to a blurring of the distinction between suggesting children should not be repeatedly exposed to limiting gender stereotypes and implying they are actually harmed if they happen to see partially nude images designed to mildly titillate adults. However, I firmly believe there is nothing incongruous about a woman who has worked as a Playboy Bunny suggesting that pictures of topless models are out of context in a newspaper. And, regardless of whether I entirely support Samantha’s arguments, I’d say it’s pretty outrageous for her boss to be telling her what she should think.

And that’s the point. It’s one thing for us to knowingly consent to being objectified in a transient way, but quite another to have the nuances of our arguments stripped away so that we can fit more easily into rigidly pre-defined boxes.

Hearteningly, the recent BBC Radio Somerset discussion became more open as it progressed; there was a good rapport between two callers with quite different views, while another mentioned double standards when it comes to sexy images of men. The presenter also drew attention to Laura and I having “different opinions on some things” (we only disagreed strongly about one thing and it wasn’t Page 3!), but agreeing about candid shots. It’s just a shame that, in keeping with the usual stereotypes, we were framed as automatic adversaries.

NB: This post, along with any others on this site about Page 3, does not constitute ‘The F-Word view’ on the subject because, of course, there is no such thing!

A photograph of two women, wearing hats made out of newspapers. They are photographed side on, facing each other with their faces close together. Both are shouting. Whether they are yelling at each other in conflict or playfully expressing mutual frustration about the position they find themselves in is open to interpretation. The picture is called ‘Shout it!’ and is by Ian Quantis, shared under a Creative Commons License.