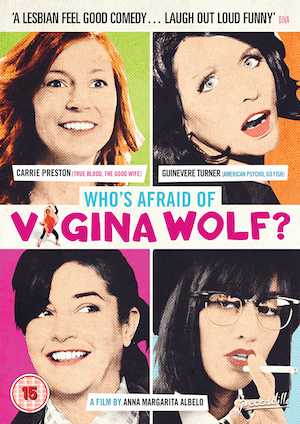 Don’t be afraid of Vagina Wolf

Who’s Afraid of Vagina Wolf? is the first feature by Anna Margarita Albelo, a Cuban-American video artist, performer and director of shorts and documentaries (including 2010 Hooters, behind-the-scenes piece accompanying the collectively made The Owls). Albelo also produced the film, provided the story for the screenplay and stars in the main role. It is a very good debut – funny, charming and smart.

“For beyond the difficulty of communicating oneself, there is the supreme difficulty of being oneself”: rarely is the message of a film so accurately reflected in the motto that appears onscreen before the opening credits. This quotation from Virginia Woolf’s The Common Reader perfectly applies to the situation Anna, the heroine, finds herself in. She’s just turned 40, has no job, no girlfriend and lives in a friend’s garage. Like Bridget Jones’ older lesbian sister, she has a permanent list of birthday resolutions that remains unchanged year after year (“make a movie, lose 20 lbs, find a girlfriend”). She makes a living performing in her vagina costume. 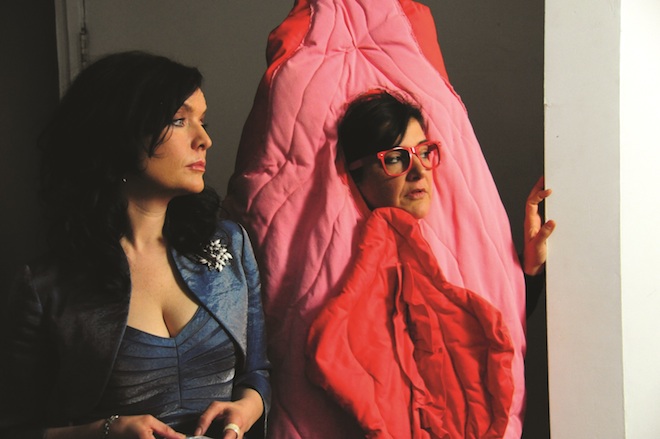 Penelope and Anna in her vagina costume

And then she meets Katia (Janina Gavankar), a young and very attractive – both physically and intellectually – self-avowed postfeminist. In order to get into her pants, Anna offers Katia a role in her non-existing film. Thus motivated, she writes the entire script and hires the crew in a matter of days, casting her two best friends, Penelope (Guinevere Turner) and Chloe (Carrie Preston), herself and Katia in the main parts. The film is an all-female variation on Mike Nichols’s 1966 film Who’s Afraid of Virginia Woolf? (adapted from a 1962 play by Edward Albee of the same title). While Anna tries unsuccessfully to seduce Katia, who does not appear to be interested in her, she herself is pursued by Julia (Agnes Olech), the cinematographer. Tension builds up between the cast and crew members as the border between the film and real life becomes more and more blurred. Everything unravels when Anna confronts Penelope and Katia, suspecting them of sleeping together, while Julia gets fed up with Anna’s unapproachability. After a couple of dramatic twists and turns, Anna finishes the film herself and invites all cast and crew for the screening. She ends up fulfilling herself both artistically and in her personal life.

It is not easy to pin down the exact genre of the film – it is a comedy, a partial autobiography, a film about making a film (at one point both productions become closely intertwined), a love story… What is more, flashbacks from Anna’s life are presented as animations. That this heterogeneity works great as a whole is, to a large extent, thanks to the brilliant cast. Although Guinevere Turner seems to be playing the same role again and again (like in The L Word or The Owls), that of a posh, stuck-up and cunning lesbian, she does it well. Carrie Preston (the wonderful Elsbeth Tascioni from The Good Wife, also known for True Blood) is marvellous as Chloe, a person who is just very polite and naïve. Janina Gavankar (The L Word and True Blood) pulls off a more-than-passable Russian accent and is convincing both as Katia and The Stud in Anna’s film while the Polish-born Agnes Olech’s Julia makes for an extremely likeable character. Last but not least, Albelo delivers a great performance, basically playing herself (or a slightly fictionalised version of herself): a move that need not guarantee success, but in this case has worked really well. 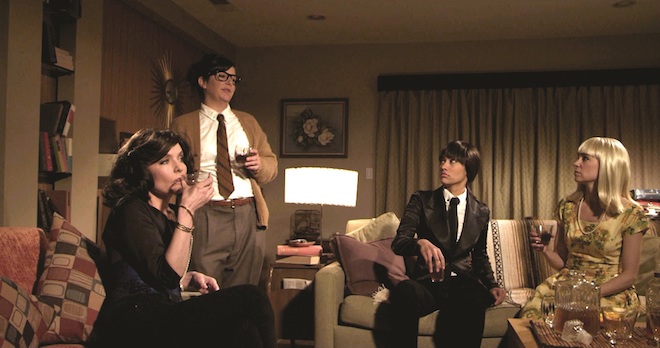 On the set of Anna’s film 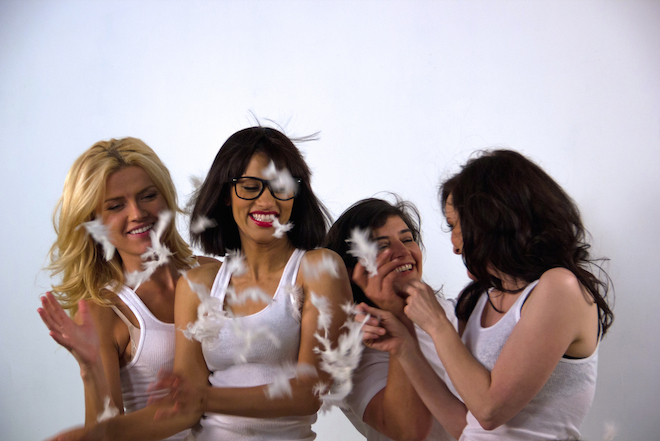 Who’s Afraid of Vagina Wolf? is now available on DVD or to download from Peccadillo Pictures website.

All pictures courtesy of Peccadillo Pictures.

First picture shows Guinevere Turner as Penelope and Anna Margarita Albelo as Anna. Anna, in red glasses, is wearing her vagina costume so her head pokes out of a full body pink-and-red suit like a clitoris. They are standing at the door, Anna is leaning on the door frame, and both are looking at something out of frame with concerned looks on their faces.

Second photo shows Guinevere Turner as Martha, Anna Margarita Albelo as George, Janina Gavankar as The Stud and Carrie Preston as Angel Tits.They are dressed up and on the set of Anna’s play, all drinking alcohol. The Stud and Angel Tits are seated on the sofa, looking at George standing next to them talking, while Martha is sitting in the armchair on the left and is not looking at George.

Third photo is of Agnes Olech, Janina Gavankar, Anna Margarita Albelo & Guinevere Turner, all wearing white tank tops and pictured from their waist up. They are laughing and waving their arms, fighting white feathers falling down on and around them.