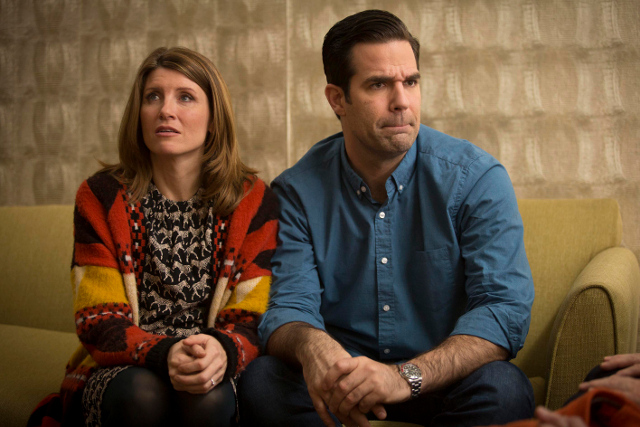 Not such a disaster after all

The couple don’t have hidden agendas or indulge in tedious game playing either. Sharon’s pregnancy is an accident. There’s no hint that it’s the result of her rapid desire to reproduce or that it’s all been part of a plan to ensnare an unsuspecting Rob into commitment and unplanned fatherhood.

Refreshingly, Horgan and Delaney don’t just reach for the Big Bag of TV Tropes and pick out the Insecure and Jealous Woman

Catastrophe is an adult affair and not just in a ‘very strong language and scenes of a sexual nature from the start’ kind of way. Granted, there are descriptions of Sharon’s vagina (“like a cosy little room, like a laundry room, not like a meeting hall”), a sprinkling of swearing and scenes of the expectant parents having energetic sex. But it’s not all about the post-watershed laughs. Delaney and Horgan also deal with issues around ‘geriatric’ pregnancy (which is what it’s called if you’re 35 or over and have the temerity to be with child), such as the possibility of having a baby with a learning disability. And they manage to do this without a hint of mawkishness.

The character of Sharon is a small screen rarity. She’s in her early forties, dresses stylishly and is allowed to have a decent amount of self-esteem. She’s also funny and doesn’t take herself too seriously. An example of this can be seen in her reaction when she finds out that Rob has kissed her friend Fran (Ashley Jensen). Refreshingly, Horgan and Delaney don’t just reach for the Big Bag of TV Tropes and pick out the Insecure and Jealous Woman. They cleverly subvert the convention instead. So Sharon doesn’t accost Rob, cross-examine him about what she’s found out and then wail “But do you love her?” in a way that suggests she’ll lose her shit if the answer is yes. Her way of dealing with the situation is to wind Rob up by beginning to act out the “I know what you did” confrontation and then taking great delight in ripping the piss out of him for the uninvited indiscretion instead.

Interestingly, for someone who’s pretty switched on, Sharon sees feminism as some kind of self sufficiency/endurance test where you score extra points if you don’t get any support from men. After a discussion about whether you need to get married when you’re having kids, she says to a colleague: “I can’t do this on my own. I do need a man and that doesn’t mean I’m not a feminist OK? I just need a person to help me and the person who wants to help me happens to be a man.”

Horgan is great as the anxious mum-to-be. When asked by Rob: “You let me put my penis in your mouth, but you won’t let me put my T-shirts in your drawer?”, she replies: “Please don’t rush me.” As well as doing an excellent job of delivering well-crafted quips and comebacks, Horgan also conveys vulnerability in a believable way. You want to reach into the telly and give Sharon a hug when she’s faced with a doctor who has all the empathy of a disposable nappy.

He seems to be defined by what he isn’t, as opposed to what he actually is

Disappointingly, Delaney’s character doesn’t have quite the same emotional depth as Horgan’s. Instead of staying safely on the other side of the Atlantic when Sharon tells him she’s pregnant, Rob comes back to London. He makes her a frittata and willingly goes to appointments with her. He’s decent but, at this point in the proceedings, he’s not hugely complex. He seems to be defined by what he isn’t (a responsibility-shirker) as opposed to what he actually is.

Indeed, one slight downer about Catastrophe is that the other characters are not as well constructed as Sharon. Like Rob, the rest of the men are pretty one-dimensional: Sharon’s brother Fergal (Jonathan Forbes) is a man-boy; Dave (Daniel Lapaine), Rob’s sort-of mate, is a caricature of an unreconstructed jerk; meanwhile, Chris (Mark Bonnar), Fran’s husband, is a timid man who is wary of his waspish wife. Along with this, Fran is not very well rounded either. Her on-off friendship with Sharon is prickly because she’s indecently nosy, brittle and fond of a spot of petty competition. However, we’re not given any clues about what makes her that way.

Still, an episode of Catastrophe is definitely worth half an hour of your time. Unlike other so-called comedies with relationships at their centre, Horgan and Delaney’s show rejects anything that’s anodyne. It doesn’t rely on tired old fallbacks such as ridiculous coincidences and easily resolved misunderstandings. It’s well acted, the writing’s sharp and it’s honest, intelligent and genuinely funny. On top of all that, Catastrophe is set in a metropolis that appears to permit people from minority ethnic communities to be residents (yes, like many others before me, I’m looking at you, Ms Dunham). Let’s raise a glass to the TV gods for commissioning series two.