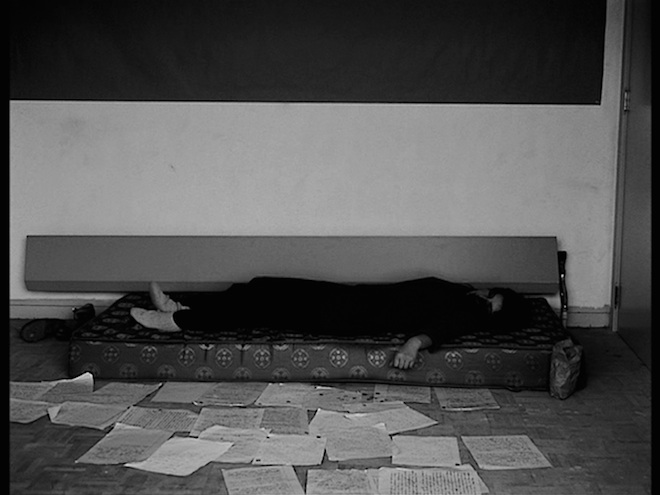 Chantal Akerman: the girl with the most sugar

This is a guest post by Sophie Mayer. She is busy adding all the latest exciting feminist films from 2015 to her forthcoming book, Political Animals: The New Feminist Cinema, that will be published by I.B. Tauris in October

Courtney Love may have wanted to be the girl with the most cake, but Julie, the protagonist of Chantal Akerman’s Je, tu, il, elle (1974), is definitely the girl with the most sugar. It’s impossible to look away – or to look – as the woman (played by Akerman herself) sits naked in her bedsit eating an entire bag of sugar with an abandon and focus that’s 50% Marina Abramovic and 50% Lena Dunham.

In fact, if you wanted to pinpoint the origin of the new feminist ‘hot mess’ cinema, with its desiring yet unmotivated female protagonists criss-crossing Brooklyn through hook-ups and self-inventing through art, Je, tu, il, elle could well be the place. In fact, Akerman drew her initial inspiration from New York, where she arrived from Belgium in 1968, right at the high point of the American avant-garde. Hanging out at Anthology Film Archives, she saw the work of Andy Warhol, Jonas Mekas and Michael Snow. Their strange hybrids of diary films and portraits, of long takes and strange cuts, of high art and rock ‘n’ roll were a definite influence.

I like to imagine that she also managed to sneak a peek of Maya Deren’s films, then in storage and oblivion at Anthology, and that the four dreaming Mayas of Deren’s famous first film Meshes of the Afternoon offered oblique inspiration for Je, tu, il, elle, shot in black and white back in Belgium.

The following year Akerman would make Jeanne Dielmann, 23 Quai du Commerce, 1080 Bruxelles (1975), the only film by a female filmmaker to make Sight & Sound’s top 50 greatest films of all time, a coolly focused real-time study of a housewife (played by Delphine Seyrig) who, the film reveals, is also a sex worker. It arrived on the international scene the same year as Laura Mulvey’s era-defining critique of Hollywood sexism ‘Visual Pleasure and Narrative Cinema’, that called for a feminist counter-cinema that Akerman’s work already embodied. Both her early features use static long takes and focus on a female protagonist attending to inconsequential tasks in domestic space, building up to explorations of depicting female sexuality on screen. 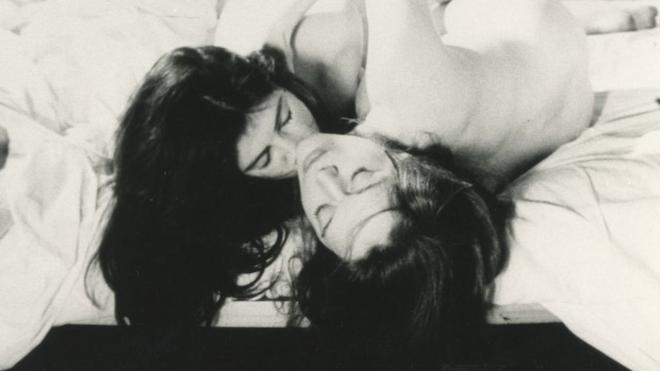 As well as the sugar eating, Je, tu, il, elle is also known for its closing, extended scene of lesbian sex that has none of the hubba-hubba close-ups or porny moaning employed in Blue is the Warmest Colour. The sex is intimate and inward-turned, entirely focused on Julie and her lover rather than on performing for the camera. Watching it is a bit like listening to the film’s voice-overs, which include intense letters to a lover. We are being offered the privilege of glimpsing something that is at once a dispassionate nature documentary and an abstract expressionist work of art, pale limbs at angles on pale sheets.

With the critical praise recently granted to Blue… and to The Duke of Burgundy (that draws on a rather different 1970s reference – Jess Franco’s soft porn – for its depiction of lesbian sex), it’s timely and exciting to have the opportunity to see a film by a female filmmaker depicting lesbian sex, even if for one night only. On 17 March the film will be screened across the country, thanks to Joanna Hogg and Adam Roberts’ screening series A nos amours. It also makes a great complement to two current releases: Desiree Akhavan’s ‘hot mess’ comedy of bisexual manners Appropriate Behaviour and Ester Martin Bergsmark’s experimental genderfluid romance Something Must Break.

Feminist and queer cinemas owe a huge debt to Akerman, even if she once denied a gay and lesbian film festival permission to show Je, tu, il, elle and has a contentious relationship with feminism. In her outrageously accomplished and inventive first feature, Akerman fuses the experiments she’d seen in New York with the sexy cool of the French New Wave. Moreover, she gives viewers and filmmakers alike permission to be the heroines of our own stories: appetitive, desiring, lovelorn, naked, mobile, ecstatic. The girls with the most sugar.

Cinemas where you can watch Je, tu, il, elle on Tuesday 17 March:

Please book your tickets directly with the cinema of your choice.

Both pictures are stills from Je, tu, il, elle, courtesy of A Nos Amours.