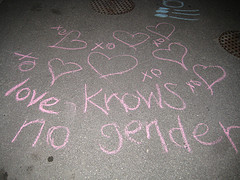 “What have you dreamt about lately?” asked the psychiatrist. “I’ve been having a recurring dream that I’m with my boyfriend and he’s wearing my dress,” I replied. “Have you ever had a relationship with a woman?” he asked. “Yes, I’m bisexual,” I shot back.

He twirled slowly in his chair, grinning from ear to ear. “Ah, you’re confused about your sexuality,” he smirked. “That really ties in with your Borderline Personality Disorder diagnosis…”

Sadly, this wasn’t the first time I’d felt as if a therapist considered my BPD somehow invalidated the authenticity of my bisexuality. This was just the first time it had been overtly stated, with that dismissive smirk.

Borderline Personality Disorder is a mental health condition which is characterised by mood swings, fear of abandonment, impulsive behaviour, an unstable sense of identity and feelings of emptiness. More women are diagnosed with the condition than men. It is heavily stigmatised and a great number of sufferers choose not to speak about it, in many ways because it is such a “gendered” diagnosis. Women are already criticised for displaying too much emotion, and men are barely permitted to show it at all, so who would want to readily admit to suffering a condition which amplifies it?

Unfortunately, an unfair and reductive interpretation of both BPD and bisexuality means there is some debate in medical circles about whether or not the unstable identity issues and impulsivity aspects of BPD might actually “cause” bisexuality in some patients. Statistics on levels of bisexuality and levels of BPD in our society (let alone the levels to which they might tend to coexist) are notoriously unreliable – largely because of the stigma attached to both. In my opinion, however, this “witch hunt” of bisexual BPD patients is a damaging, ungrounded and counterproductive phenomenon.

Renee*, like me, is bisexual and has had counselling for BPD. “My major ‘symptom’ as far as my therapist was concerned was my sexually impulsive behaviour,” she sighs.

“The counsellor emphasised that me sleeping with men and women was harmful and a symptom of BPD. I have always been proud of my bisexuality, though. This was the first time I ever questioned if I was actually bi or if it was because of a mental illness. It made it hard to explain how I was feeling without automatically being told I was being impulsive. I do not believe there is a direct correlation between bisexuality and BPD.”

Sarah Reece is a bisexual mental health peer worker. During a training session she was once taught that bisexuality is a symptom of BPD. “Most of the class seemed to swallow that statement hook line and sinker,” she recalls. “When challenged by a lesbian student, the facilitator agreed that bisexuality did exist as an identity, but still maintained that when present with BPD it was just a symptom.” Reece continues:

“The treatment of people with BPD in general is appalling, dismissive, invalidating, and frequently outright abusive. Ignoring and dismissing diverse experiences of identity such as being bi compound distress and disconnection and make the task of recovery, acceptance, and self care so much more challenging.”

The issue of combined BPD/bisexuality stigma is so widespread that prominent bi activist Dr Caroline Walters is working on a research paper about it, titled The bisexual condition? A critique of Borderline Personality Disorder and Bisexual Stereotypes. The paper, when published, will “outline the relationship between the language used in the diagnostic criteria for Borderline Personality Disorder (BPD) and bisexual stereotypes” and “explore the ways that bisexual stereotypes and the diagnostic criteria for BPD overlap in ways that can prove unhelpful and pathologising for bisexual patients”. Walters will discuss the fact that “in the case of BPD all aspects of the patient’s life are liable to be viewed as symptoms”.

That day in the therapy session I felt humiliated and as if I was being told by this rather unpleasant man that, at the age of 30, I still didn’t own my sexuality. I was just a silly sick little girl who didn’t know what she wanted, who needed to be told by an older male therapist that her sexuality wasn’t genuine. Everyone I had loved or been intimate with was just a symptom of my condition. How horrible and damning.

It’s been 42 years since homosexuality was declassified as a mental illness by the American Psychiatric Association. So why is being attracted to more than one gender still considered ripe for dismissal and mockery in psychiatric circles?

*Some names have been changed to protect identities

Charlotte “Lottie” Dingle is a freelance journalist, artist and activist living in London. She is motivated to remain on this earth thanks to cats, red wine, Jeanette Winterson, Dame Julian of Norwich and Kate Bush.