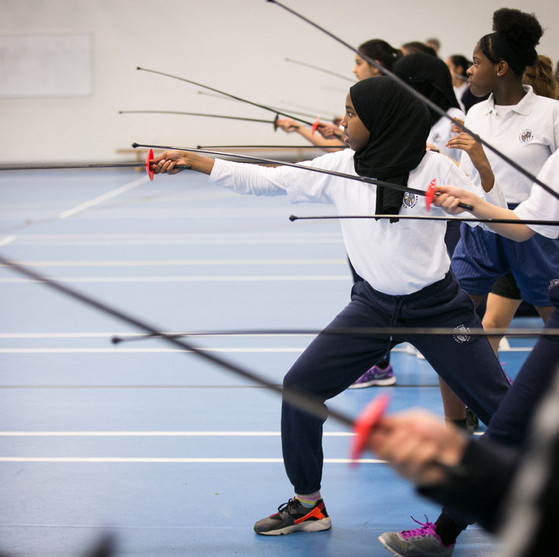 Fighting back against the government’s silencing of Muslim women 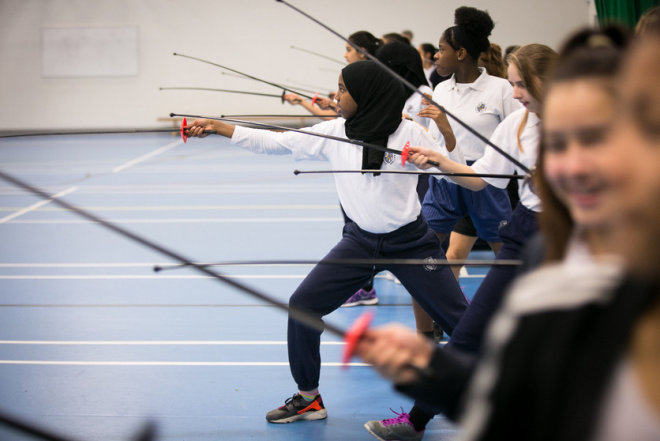 In her seminal text, Sister Outsider, feminist writer Audre Lorde notes: “It is not difference which immobilizes us but silence, and there are so many silences to be broken.”

Silence or a lack of voice is a common experience for Muslim women, who have frequently, both historically and in contemporary times, found themselves being spoken about, as opposed to spoken to.

We have seen this phenomenon at play over the past few days with the announcement of David Cameron’s latest brainchild: a £20 million fund aimed at teaching Muslim women English, in an alarming conflation of lack of fluency in English among immigrant Muslim women with extremism. Never mind the hypocrisy of this in light of the devastating impact government cuts have had on many services that help migrant women to learn English, yet again Muslim women are being scape-goated for policy ends, subjected to colonial White Saviour rhetoric and, in this instance, reduced to a language problem, or simply, a problem.

Maslaha’s Muslim Girls Fence project aims to challenge stereotypes of Muslim women and raise aspirations given the prevalence of precisely the kind of dangerous and isolating rhetoric that Cameron articulated on Monday.

Raising aspirations among Muslim girls is particularly important in the current climate in the UK where Muslim women face strong negative stereotypes and inequalities. Young Muslims are on the frontline of the government’s counter-radicalisation strategies with recent figures indicating that half of the 4,000 people referred as part of the ‘Channel’ strand of the Prevent strategy since 2012 have been under the age of 18.

While all young Muslims suffer the stigmatising effects of these strategies, Islamophobia has a strong gendered dimension with 58% of reported cases of discrimination in the UK concerning women. The Fawcett Society have described Muslim women as “serving as a battle ground for virtually every national debate, including secularism, religion, terrorism and multiculturalism”.

Surveillance, isolation from peers and, increasingly, silence are the reality of the lives of young Muslims today

As well as disenfranchisement, Muslim women also face disproportionate social inequalities in areas such as education, employment and healthcare. Research conducted this year showed that discrimination against Muslim women in the workplace means they are 70% more likely to be unemployed than their white Christian counterparts – even when their qualifications are the same. Maslaha believes that further alienating young people who already face multiple disadvantages, is dangerous and that practical alternatives such as this initiative are urgently needed.

In the initial weeks of our Muslim Girls Fence project, our Year 8 participants at Frederick Bremer school in Walthamstow, a mix of Muslim and non-Muslim girls, reflected on how the media portrays Muslim women. The results were stark and telling:

“People think that Muslim women come into England and take jobs and homes”
“They are seen as victims, dangerous, desperate”
“Strict, terrorists, easily radicalised”
“Muslim women and girls are shown as weak and now we are slowly being afraid of letting others know we are Muslim.” 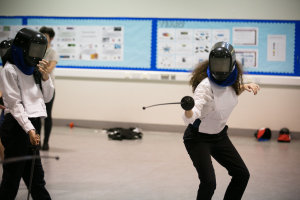 Surveillance, isolation from peers and, increasingly, silence are the reality of the lives of young Muslims today. A recurring criticism of the government’s Prevent strategy, is the fact that it is shutting down space for critical discussion and stifling classroom debate, a phenomenon Audre Lorde would describe as “a tyranny of silence”.

Maslaha’s Muslim Girls Fence is sharing new visions of what it really means to be a young Muslim in the UK today, with the aim of challenging the overwhelmingly negative image of Muslim women reinforced in mainstream media. The project will involve the production of an exhibition and short film in an effort to breach a public imagination that is being ever constricted and suppressed by the media and government preoccupation with a certain type of Muslim woman. In this week’s coverage, for example, we saw the re-emergence of those familiar stock images of a woman in a burkha, frequently browsing vegetables.

In her book Muslim Women in Britain: demystifying the Muslimah academic Dr Sariya Contractor quotes French philosopher Paul Ricoeur’s observation on the power of media representation: “What is ultimately important in the text and in the world of art in general is not the object which it depicts but the world that it generates.”

Relentless stereotyping and the silencing of Muslim women have generated a world that can only be described as oppressive; a world that time and time again reduces a group of people as diverse as womankind as a whole, to the profile of a silent, submissive woman in constant need of liberation. In her TED talk, The Danger of the Single Story, writer Chimamanda Ngozi Adichie says: “It is impossible to engage properly with a place or a person without engaging with all of the stories of that place and that person. The consequence of the single story is this – it robs people of dignity… It emphasises how we are different rather than how we are similar.” 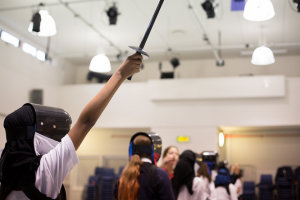 Far from building integration in a “creative and generous way“, the current government is compounding the isolation and inequalities facing Muslim women; from the intensification of stigmatising strategies like Prevent to the fact that resounding cuts to local authorities mean that specialist services, providing critical support to BAME people and local Muslim communities, are being forced to close.

To return to Lorde’s reflections on the immobilising effects of silence, we hope that Muslim Girls Fence can be just one unusual way that young Muslim women find the opportunity to “reclaim the language that has been made to work against them, and transform that silence into language and action.”

[All images are photographs of the Muslim Girls Fence group, taken by Rehmat Rayatt and used here with the permission of Maslaha.

The first photograph features a line of unmasked girls with fencing foils thrusting forward, most prominently a brown-skinned girl wearing a black headscarf.

The second photograph is of two masked girls fencing. A girl with long curly hair thrusts forward while another girl steps out of the way.

The third image is of a group of masked girls. The girl at the front of the photograph raises her foil towards the ceiling, as if in victory.]