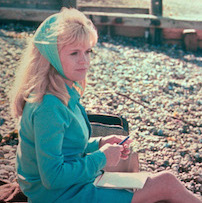 “It was such a laugh!” Writer Nell Dunn in conversation

The day after director Ken Loach wins his third Palme D’Or for the anti-austerity drama I, Daniel Blake at Cannes, I find myself on the doorstep ready to interview British author, screenwriter and playwright Nell Dunn at her Fulham home where she has lived since the early 1970s. Encouragingly, I see a big pot of rosemary growing outside, a medicinal plant that is supposed to stimulate memory and in a matriarchal home ward off evil.

Nell Dunn is most famously known for her two books Up the Junction (1963) and Poor Cow (1967) in which she frankly portrays the lives and loves of South London working class women. Dunn’s bold representation of female sexuality mixed with a singular ear for the vernacular, in particular the bouncing rhythms of South London working-class slang, combine to give us these two landmark pieces of fiction. The books’ arrival on the 1960s literary scene carried a veritable “succès de scandale… [both] praised and attacked for their energy, candour and realism”, author Margaret Drabble remembers in her Introduction for Virago’s 1988 reprint of Poor Cow. Ken Loach and Nell Dunn collaborated to bring Up the Junction and Poor Cow to the small and big screens. In 1965 Dunn wrote the screenplay for Up the Junction for a BBC Wednesday Play under Loach’s direction. The pair went on to co-write the screenplay for Poor Cow, Loach’s debut film with a cast of 60s working-class rising stars that included Carol White and Terence Stamp. Dunn drew on her own experiences of living in Battersea and the close female friendships she made there which formed the material for both of the stories.

In 1959 Dunn moved to South London with her first husband Jeremy Sandford (author of the Loach-directed BBC television play Cathy Come Home) and their young son. Dunn put her son in the local nursery and went to work in the local sweet factory wrapping liqueur chocolates. I began our interview by asking her about her memories of living in Battersea and her motivation for moving. “It’s funny, it’s almost because of the aesthetics, you know, I thought it was very pretty, it was street after street of Victorian houses with gardens in the front and back and lots of animals, pigeon lofts and cats and dogs,” she smiles in reminiscence. “The front cover of the first edition of Up the Junction shows me surrounded by about six dogs; it was a highly spontaneous, friendly way of life”.

Dunn’s background is well documented; the granddaughter of a successful Canadian industrialist and the daughter of Sir Philip Dunn, notably she is a sitter in four portraits at the National Portrait Gallery. However, it seems to be her move over the river from Chelsea to Battersea that was the making of her: eschewing her privileged upbringing, she found Battersea a completely different place and the comfort of honest friendship, community and genuine hospitality a life-changing event. “It was no big experimental business, you know”, Dunn is quick to tell me, I presume because of the issue of class and appropriation, “it didn’t have that charge, I liked it and I moved in”.

We move on to talk about her working relationship with Loach. They had a friend in common and were introduced. Loach was persuaded to read Up the Junction and then went on to read Poor Cow. They worked on the Poor Cow screenplay for one month, she remembers. “He lived in Barnes and I lived in Putney and he’d come over and I’d do a bit and he’d leave me with homework”, she recalls, “he was in charge of the picture and the story and I was in charge of all the dialogue”. Poor Cow chronicles the life of working-class Joy (outstandingly played by Carol White), whose uncaring husband (John Bindon) and sensitive lover (Terence Stamp) are both in prison. She has a baby boy called Jonny to provide for and a healthy regard for sex. In a chapter from the book titled ‘Turned On’, here is Joy writing to her lover Dave who is in prison: “Oh darling I’m thinking of all what we taked aboat [sic] and I’ll never regret what we done in Sex. We done so many wonderful things, and it wasn’t [sic] wrong because we were in LOVE”.

Through Carol White’s performance and Dunn’s screenplay, Loach’s film perfectly realises Dunn’s rebellious portrait of a young freewheeling woman with factory money in her pocket and a hunger for men and sex. Under Loach’s direction, influenced by the Czech New Wave, Joy’s story is brought out with characteristic precision and care; he rigorously shows how Joy’s predicaments arise from socio-political circumstances beyond her control. The combination of Loach’s socialist politics mixed with a Czech formalism and Dunn’s spirited tale of a London girl’s life, love and young motherhood make Poor Cow a riveting film to watch.

Both Up the Junction and Poor Cow suffered a backlash because of their portrayal of the (pre-pill) sexual proclivities of young working-class women, that is to say the fact they had sex. Christian morality campaigner Mary Whitehouse lambasted Up the Junction, particularly for its explicit backstreet abortion scene. This scene significantly contributed to a wider political debate on abortion which eventually led to the Abortion Act being passed in 1967. Dunn recalls being very surprised that people were so shocked, she names Mary Whitehouse and recalls the response of writer John Braine who said he was “disgusted and nauseated” by her book. I ask Dunn whether she had shown her writing to her Battersea friends. “I read it all to them”, she recalls, “but when things started coming out in the paper saying it’s so disgraceful they were very confused; they felt like me, this was [things like] swimming at night, climbing into the Tooting Bec pool, swimming in their bras, it was such a laugh!” Dunn is still in touch with these friends today, the ones that are still alive, she adds.

As the early 60s brought a new interest in women’s lives, Dunn was critically hailed and associated with Alan Sillitoe’s school of “angry young men”. British New Wave cinema and the Royal Court theatre were on the rise, churning out working-class heroes aplenty, but it was Sheila Delaney’s proto-feminist play A Taste of Honey (1961), which she adapted for screen under the direction of Tony Richardson and starring Rita Tushingham, that had special bite for female audiences and Dunn herself. Sadly, when film histories of the British New Wave are revisited in top tens or anniversary screenings, it is more often than not that female writers like Delaney and Dunn and their working-class heroines Jo and Joy are forgotten.

There is a rich history of dissenting British feminist authors who have written stories about disobedient women, from Jane Austen and Virginia Woolf to Delaney and Dunn

I ask Dunn if she was happy with how Joy was represented on screen and she surprises me, saying: “You know, I have not seen it [Poor Cow] for 50 years! I was happy and I absolutely loved the character of Joy”. As we continue to discuss her characters’ sexual bawdiness, their unfiltered language (with today’s audiences the book would raise a few eyebrows for its casual homophobia and racism) and her women’s right to have a good time, she suddenly exclaims: “The most subversive thing in Poor Cow was when Joy says, ‘I began to enjoy different men’s bodies’”. I look back over my interview notes and see that I have pulled out something similar; specifically, “I need different men to satisfy my different needs”. We both agree that this was brilliantly scandalous and I remind her that Loach included these lines in his film. “I always liked that”, Dunn confirms, “It shocked everybody!”

We draw to a close by discussing feminist politics. As a young writer (she wrote her first play at 13 about cannibalism), was she engaged or interested in the burgeoning feminist / women’s liberation movement of the time? Had she read Betty Freidan’s The Feminine Mystique or Germaine Greer’s The Female Eunuch? “I definitely was. I read them avidly and thought The Female Eunuch was wonderful and of course Simone de Beauvoir’s The Second Sex was wonderful. I read it and took it very seriously”. Dunn then tells me about “a little gang of writers I know in their 60s” that she likes to spend time with, Michelle Roberts and Shena Mackay are among the group. “We encourage each other”, she says softly.

On 24 June, the ICO is re-releasing Poor Cow into cinemas in a new digital restoration overseen by Loach, who as well as winning the Palme D’Or is celebrating his 80th birthday this year. There is a rich history of dissenting British feminist authors who have written stories about disobedient women, from Jane Austen and Virginia Woolf to Delaney and Dunn – further reflected in the films of Jane Arden, Sally Potter, Amma Assante and Andrea Arnold. A woman’s right to self-determination continues to be a feminist issue and it is just “fantastic” as Joy would say that Poor Cow is being re-released for new audiences to enjoy.

To launch the new digital restoration of Poor Cow, Nell Dunn and Terence Stamp will be at the Barbican for a ScreenTalk on 23 June.

For details of the film release go to ICO website.

All pictures courtesy of ICO.
First picture shows a woman, wearing sky-blue coat and sky-blue fashion headscarf on her long blonde hair, sitting on a stony beach on a brown blanket, on a sunny day. She holds a pad of paper and a pen on her crossed legs and is looking away from the camera as if looking for inspiration in the sea. There are wavebreakers and some people in the distance.
Second picture is of a man and a woman sitting on the bed, leaning against the wall, laughing. The walls have peeling greenish paint and there are some black and white photographs of what looks like a soccer team and some individual men on one of the walls. The man has black hair, is wearing jeans shirt and khaki trousers, as well as brown suede boots. The woman has long blonde hair and is wearing white short dress, black short jacket and and black boots. There’s a cup and a saucer on the chair next to the bed on the right and some magazines scattered on the bed.
Third picture shows a woman, wearing sky-blue coat and sky-blue fashion headscarf on her long blonde hair, standing in front of a shop displaying lots of items outside, including hats and horoscope cards. She’s looking at the postcard stand as if choosing a postcard. There’s a small child with curly hair standing between her and the stand, wearing shorts, brown sweater and sandals with socks.